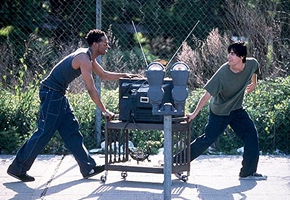 This week’s Friday Night ‘Fro is different for all the others for the fact that for the first time, I’m putting up a movie I have never seen. Yeah, I’ve always wanted to see Requiem For A Dream since it was released in 2000, but for some reason, never have. I heard all kinds of shit about this movie:  This movie will make you cry and is really depressing, Marlon Wayans shows that he can really act, Jennifer Connelly does some “things”, etc. At first I was gonna put up Gremlins instead of this movie because Gremlins has a sort of Christmas theme going on; but then I remembered that I hate Christmas. Then again, maybe I’m putting up Requiem For A Dream because it’s directed by Darren Aronofsky who also directed another movie I really want to see The Wrestler (My most anticipated movie in 2008 that I’ll probably have to wait to see in 2009). Check out the movie, tell me what you think (You’ll also notice that I jacked this from Hulu.com; not a bad “legit” site for movies & television by the way). You can also continue the suggest more movies for future Friday Night ‘Fro’s in the forums. Peace.

Requiem For A Dream