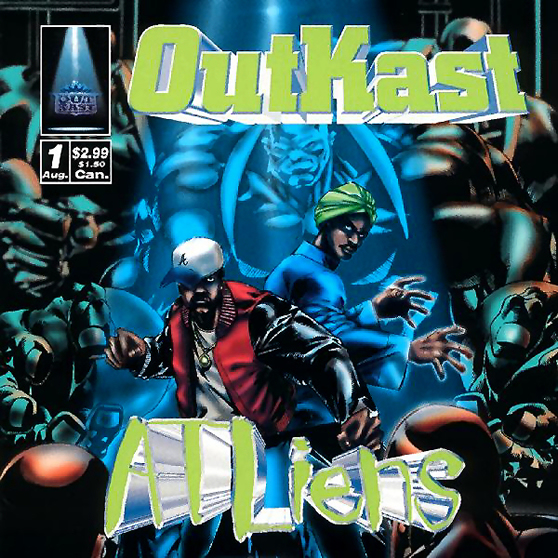 Have you ever listened to an album that was so good that every time you listened to the album your favorite song from the album would change? Okay, let me explain better: One day it’s this song and then the next day it’s another? That’s how I felt and still feel about Outkast’s greatest album ATLiens. Matter of fact, not only is it Outkast best album and one of my Top 5 albums of all time, I honestly feel it’s the BEST Hip-Hop album to ever come out of the South. That’s how strong I feel about the significance of this album.

This is the album that changed everything for Andre 3000 & Big Boi. Yes their first album Southernplayalisticadillacmuzik was great. But it was ATLiens that set them apart as a group that set it’s own path. Here they went to more unconventional subject matter than what was covered in Southern Hip-Hop and threw away the tag they got from their first album (Southern Pimps). Do you really think that we’d be talking about Outkast the same way if they would have stay on that path?

I can honestly say that every song on ATLiens is straight fire. Okay, maybe “Ksdubfsliu” was kinda lame. What? You never heard that song? You’re right. The only way for a bad track to be on this album is to make up one and say it was on there. But then just because it’s on the album and surrounded by greatest, it to would probably be a great song then. So even then you fail.

On this album, Outkast also stepped behind the boards and produced 5 of the 15 tracks on the album. Their involvement on production side would gradually increase in future Outkast’s albums, but it was here where they started. Not to slight Organzied Noize; the tracks they produced shaped the whole album and fit perfectly with Outkast.

So yeah, as you can see, I REALLY like this album. That also means I could write on and on about it. There’s so many things I could talk about. How the title ATLiens help make Atlanta the hotbed of talent it is today. The whole aliens theme used throughout the album (How dope is that album cover?). The little things thrown in each track (“Wheelz Of Steel” – When Big Boi says; “Don’t want no AIDS, no claps, or no rabies”, I still clap at the right time). You could literally write a short book on the importance of ATLiens.

This album is the epitome of Classic Material.