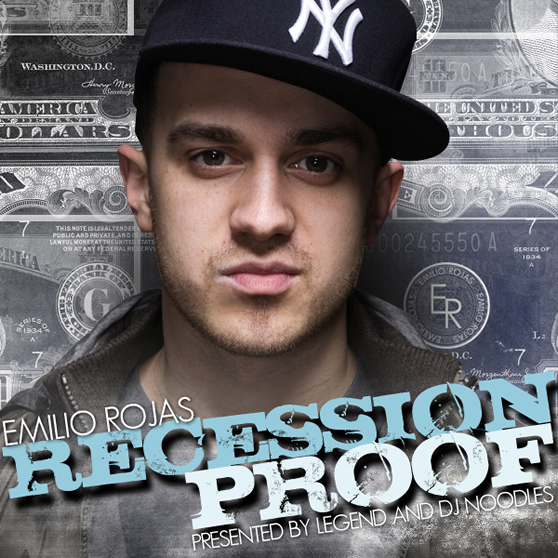 Emilio Rojas… That’s a name that many Hip-Hop fans might not recognize. Well that’s understandable since he’s kind of new on the Hip-Hop scene, but that doesn’t mean you shouldn’t check out for him. Emilio Rojas just happens to be the new breed of rappers that bringing life back into the genre of Hip-Hop with lyricism and flow, not by relying on catchy hooks and corny dances. When I first saw the video for Emilio’s song “That Time” to be featured on his upcoming album The Nouveau Slick I was immediately hooked to check out more work from him. Lets see how this mixtape holds listeners over until his next album drops…

Intro
Produced by M-Phazes
Right at the start Emilio comes out of the gates with force in letting you know exactly what you’re getting in listening to this album. M-Phazes provides Emilio with a strong track that’s a perfect fit for an intro track as Emilio gets straight to the lyrics and shows you that he’s a force to be reckoned with.

Keys To The City
Produced by Midnite
Emilio doesn’t let up with this next track that keeps the energy going thanks to the synth heavy beat produced by Midnite. Emilio talks about how he’s on his grind with his music dreams and is on a mission to run New York rap and bring it back to the top where it once resided.

On The Ave
Featuring Fashawn; Produced by M-Phazes
Everybody knows that you gotta grind if you want to make it in this industry and the rap game is just like the crack game as stated by Emilio and Fashawn who drop verses about how they can be found on the ave getting that paper. M-Phazes produced a hard-hitting track that sounds like something M.O.P. would be at home on while both emcees here do it justice.

Just One Night
Produced by Deheb
Emilio decides to slow things down just a bit with this track produced by Deheb who provides a beat that allows him to spit about how he doesn’t fall in love in just one night. Emilio doesn’t stray from the current Auto-Tune trend as he incorporates it on the chorus to a minimal effect. This track is okay but starts to go dull after a while.

Young, Fresh, & Fly
Produced by Illmind
You can call this one of the single tracks off of this mixtape as it’s one that Emilio has been performing at concerts recently. Illmind provides Emilio with a bouncy synth track that sees him talking about the reasons why he’s young, fresh, and fly. This track is good but I don’t know if it’s the one that I would be pushing as a single and performing.

Here I Am
Featuring Mela Machinko; Produced by Khrysis
Coming back with a bang is exactly what Emilio does with this Khrysis produced track as he spits lyrics letting the people know who is and that he’s here to stay in the industry. Emilio displays great lyricism on the track that meshes well with the beat.

Let It Out
Produced by Timbaland
On this track Emilio borrows the Timbaland produced track “Bounce” from his Shock Value album to spit some rapid-fire bars. There’s no doubt that the Timbaland beat is nicely produced and surprisingly it fits with Emilio’s lyrics and chorus telling the girls to let the freak in them out and stop concealing it.

Don’t Go
Featuring Mela Machinko; Produced by DJ Noodles
This next track sees Emilio spittin’ lyrics about how he doesn’t want his girl to go because of his actions while recalling his past dealing with his mother and father. Emilio’s lyrics hold up on their end but don’t really fit well with the average production provided by DJ Noodles who also hosts the mixtape (DJ Drama/DJ Khaled??…NO!!!)

585 Remix
Featuring Hassaan Mackey, Black Sinatra, LI, & Nikal Fieldz; Produced by M-Phazes
M-Phazes produces a nice beat backed with guitars and menacing piano riffs that sets the backdrop for Emilio and the other emcees to spit about the 585 (Rochester, New York). No one emcee outshines the others on this track as they drop some nice lyrics about their hometown and how it is where they’re from.

Murder
Featuring Donny Goines & Mela Machinko; Produced by Illmind
On this track Illmind comes through with some more nice production as Emilio spits about what’s going on around him from robbery to cheating to gun clappin’. Emilio drops a nice verse but Donny Goines is on point with his verse displaying his lyrical skills.

10 Player Commandments
Produced by Reality
Reality provides Emilio with a high-energy beat that allows him to give the listeners (both male and female) the commandments/rules about being a player and how to not get caught up while getting around. It’s an okay track and creative idea in building off Biggie’s “10 Crack Commandments”, but this type of song has been done before in a better fashion.

Way She Moves
Featuring Stat Quo & Marvin Priest; Produced by M-Phazes
This is my choice for the best track on the mixtape as M-Phazes really does his thing and produces a great beat for Emilio and Stat Quo to drop lyrics about the chicks and how they catch their eye. Marvin Priest does a nice job in providing a Charlie Wilson-like chorus. Emilio needs to make this a single off of this project as it has the appeal to catch fans and listeners alike.

Free
Produced by Zaire
This track serves as the outro of the mixtape so to speak as Emilio gets lyrical over a nicely produced beat by Zaire. Emilio talks about the various forms of being free and how it’s something that everybody needs to be.

Bottom Line:
At the end of this mixtape Emilio shows why he’s an artist that people need to be checking for and not just blowing off as another emcee trying to make it in the industry. In a time where lyrical skill and ability isn’t the deciding factor in whether a rapper will be successful or not, Emilio displays much of that skill and shows he doesn’t need the radio hits or club bangers to make it. Even though this is only a mixtape, it shows the potential that Emilio has to be a great emcee and why he considers himself a “breath of fresh air” (just check out his debut album bearing the same title). More and more new artists are coming into the industry that are displaying more lyricism and flow in their lyrics and Emilio can be added to that group. Now we just have to wait and see just how far he can take it in bringing a renaissance of real Hip-Hop music back to the industry.