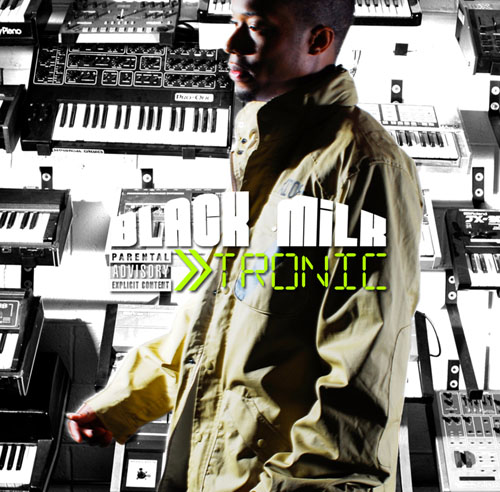 “Better late than never”… That saying probably holds the most truth when it comes to this Rewind Review of Black Milk’s second album release entitled Tronic. Coming out of Detroit, a place that has a history of producing some of Hip-Hop greatest artists and producers (Jay Dee aka J Dilla, Eminem, Proof, D12, Royce Da 5’9”, Slum Village, Elzhi, etc.), Black Milk has a lot of weight on his shoulders in continuing the legacy that has been laid before him. This is especially the case when people have already been comparing him to the late, great J Dilla in terms of his music production behind the boards. Lets see if Black Milk does the legacy justice with this album or if his star is fading just as fast as it started.

Long Story Short
Featuring Dwele; Produced by Black Milk
Black Milk starts off the album with a bang as the “Intro” track he provides give the listener a great introduction of who he is and everything that he’s been through to get to this point in his career. From his early starts in producing to landing a spot on Slum Village’s album (“Reunion”) to his tenure with the B.R. Gunna group to landing a deal with Fat Beats, Black Milk gives you his career autobiography in five minutes. The hard hitting drums blended with the smearing synths along with featured artist Dwele on the horns provides a great backdrop for Milk to spit rhymes over. I can see why this song was posted on so many Top Hip-Hop Songs of 2008 list, this is a great way to start off the album and bring new listeners up to speed.

Bounce
Produced by Black Milk
Right after the first track we immediate go into the next without a stop in momentum or energy. Just as the title suggests, Black Milk produces a fitting beat with enough bounce to have listeners nodding their heads. In terms of the lyrics Black Milk is on point in talking about how he’d rather see all of these commercial radio ringtone artists bounce from the industry and make room for better artists to shine such as Milk himself.

Give The Drummer Sum
Produced by Black Milk
From the smooth track “Bounce” we jump right back into it with the pounding drums and horns of “Give The Drummer Sum”, which happened to be the album’s lead single. It’s no surprise that it was selected because Black produces a live sounding beat and delivers rhymes that match the intensity. This track is a prime example of why Black Milk is one of the best upcoming producers in that he has a lot of diversity to his music production. He doesn’t rely on the common beat of claps, snaps, rolling snare hits, etc., but give the listener an experience through the music.

Without U
Featuring Colin Munroe; Produced by Colin Munroe
At first listen I was really feeling this track too much but over time this song grew on it and I can say that it’s a pretty good track. Colin Munroe who provides vocals on the track also supplies Black Milk with a beat that allows his to spit lyrics about how live after his girl and relationship has been great. This song ends up being a good listen with a topic that guys can relate to. Peep the nice beat interlude following the song, which sounds like Black Milk’s rendition of Stevie Wonder’s “Ribbon In The Sky” (that’s his Dilla side showing).

Hold It Down
Produced by Black Milk
After slowing things down a bit on the previous track, Black Milk elevates back to high gear with this track. Black up-tempo beat gives the bounce that was heard on the second track as his lyrics are focused on whether he should do songs that reach more of the commercial audience or stick true to his underground roots in delivering that real Hip-Hop music that so many crave nowadays (hopefully he sticks with the latter).

Losing Out
Featuring Royce 5’9”; Produced by Black Milk
This track is the second single off of the album as Black brings along Royce Da 5’9” on this hard-hitting track. Black Milk provides a nice beat that allows him and Royce to drop some quality lyrics on how they will always come out on top and overcome the opposition that they face.

Hell Yeah
Featuring Fat Ray; Produced by Black Milk
Talk about a hard-hitting beat, this is probably the hardest track on the entire album. The track that Black Milk produces is a speaker-blowing beat that sees him straight spitting lyrics showing that he can handle both behind the boards and behind the mic. He also hooks back up with his former partner Fat Ray of B.R. Gunna that provides the chorus.

Overdose
Produced by Black Milk
After a brief interlude we have reached the halfway mark of the album, and after seven tracks it has been very good so far. On this track Black Milk produces a synth heavy beat that has him spitting some average lyrics. This track is good but doesn’t get beyond the average mark or reach the level of some of the previous tracks.

Reppin’ For U
Featuring AB; Produced by Black Milk
Black Milk produces a soulful sounding beat that allows him to speak about all of the things that he represents for like Hip-Hop music, Detroit, etc. This track works well as AB provides some great vocals on the chorus to make it complete.

The Matrix
Featuring Pharoahe Monch, Sean Price, & DJ Premier; Produced by Black Milk
This was initially the first track that I heard before the album’s release and it got me really interested in picking up the album. As the B-Side of the lead single “Give The Drummer Sum”, this track features the most lyricism out of any other tracks on the album. Black Milk, Pharoahe Monch, and Sean Price all drop great verses that match up nicely to the beat that Black produces. This song is straight Hip-Hop compete with the chorus scratches by none other than DJ Premier.

Try
Produced by Black Milk
Black Milk goes back to the soul sample sound that he presented on his previous releases Sound Of The City and Popular Demand and it works well for him. The track tends to come off a monotonous since much of the production on the album strayed away from sampling for the most part, but Black makes the song work for him in the end.

Tronic Summer
Produced by Black Milk
This track serves as a musical interlude of sorts featuring Black Milk’s production. It’s good production from Black, but nothing really too special in that regards. Just think of this track in the same essence of the beat interludes on some of the previous tracks.

Bond 4 Life
Featuring Melanie Rutherford; Produced by Black Milk
At the close of the album we are blessed with this great track by Black Milk featuring the vocals of Melanie Rutherford on the chorus. This is probably my favorite track on the entire album as Black produces such a great beat that blends nicely with Melanie’s singing and allows him to spit lyrics that are simple and straight to the point. This song is a great way to close out the album as it has that finale/closing feel to it and lets us know that the journey is complete.

Elec (Outro)
Produced by Black Milk
This track which is the “Outro” of the album is another musical interlude similar to that of “Tronic Summer” that just features some lasting Black Milk production to close things out. Again it’s good production by Black but nothing too special in terms of what we have heard throughout the album from him.

Bottom Line:
After 14 tracks it’s clear to say that Black Milk has clearly avoided the sophomore jinx that so many artists are cursed with after their debut album. But more importantly than that Black holds true to the Detroit Hip-Hop legacy that has such a strong foundation. He shows that he’s able to hold it down in both production and rapping with much room to grow in terms of lyricism. But I don’t think that’s what Black Milk is striving to be known for as his music production skills outweighs his lyrics behind the microphone. Similar to how J Dilla was known for his beats as well as spittin’ lyrics while in the group Slum Village, as time went on more people recognized Dilla’s legacy for his production and not his lyricism. That is much the case with Black Milk and it’s clear to see why people are comparing him to the likes of Jay Dee. But I think that Black Milk doesn’t need to be compared to J Dilla and he’s able to stand on his own as a producer. People are comparing him just because he’s a great upcoming producer from Detroit so they expect him to be the next Dilla. But he’s not J Dilla or is he ever gonna be, he’s BLACK MILK and that name alone is starting to hold weight. This album was definitely one of the finest Hip-Hop releases in 2008 and one that everybody who calls themselves a Hip-Hop fan needs to pick up and have in their collection. Black Milk has shown that he can carry the torch and continue on the Detroit legacy, and at the same time shows that he has much more great music to come and is becoming an established name in the industry.