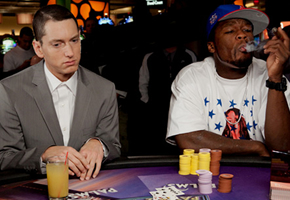 Okay, here it is. People waited up late last night to hear the Dr. Dre produced track. The video premiered on MTV early this morning. The earth opened up and Eminem finally released the first video off his upcoming album Relapse….and you know what? It’s okay. The video is funny. The song (As well as the video) is in the vain of all his other first singles (“Without Me”, “Just Lose It”, “The Real Slim Shady”, etc.). Check out the video and download the song and tell us what you think.