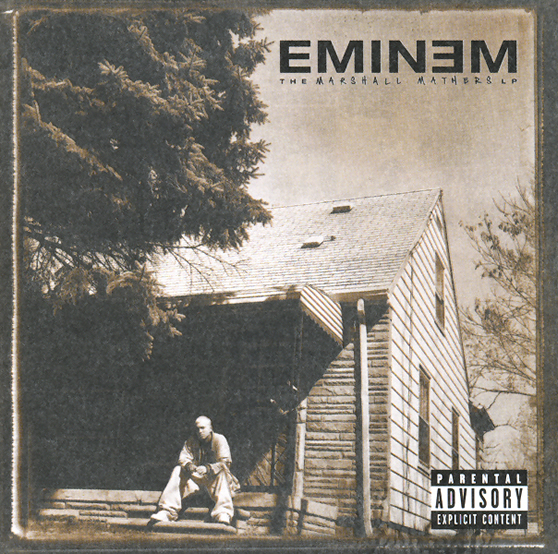 The other day I realized something. After all the hype over Eminem’s latest album Relapse, I’m still not sure if I like it. Not to say it’s bad album; Slim Shady still has arguably the best flow on the planet. There’s just something that doesn’t grab me. The beats are there. The lyrics are there. Still no song off the album is my new favorite song. But this isn’t about my indecisiveness on Relapse, it’s about showing love to Eminem’s 2nd album The Marshall Mathers LP. And maybe that’s the problem. Maybe I shouldn’t compare Eminem’s latest to his greatest. I’ve always said that The Slim Shady LP showed Eminem is talented, but his second album showed he could control it.

Sometimes with albums you just know immediately when you got something special (Ex. After first listen of “The Ruler’s Back” off The Blueprint, I was immediately yelling “5 Mics!”…when 5 mics mattered). The first song off the The Marshall Mathers LP is “Kill You”. After the initial chorus, Em goes in: “They said I can’t rap about being broke no more/They ain’t say I can’t rap about coke no more/(AH!) Slut, you think I won’t choke no whore/’til the vocal cords don’t work in her throat no more?!” In hindsight, I think I knew then this album was special then. Yea, he was still crazy and still talented, but he was also growing. Of course the media darling off the album was “Stan”. Rightfully so. Even though at one point they played this song “ad nauseam”, it’s still as brilliant as ever and should be look as one of the best Hip-Hop songs of all times. “Kim” had Eminem taken aim at a usual target but awarded fans by being a prequel to a previous song (The Slim Shady LP‘s “97’ Bonnie & Clyde”). On “Marshall Mathers”, Eminem has more targets, well, almost everybody (Ex. Insane Clown Posse, Britney Spears, New Kids On The Block, Vanilla Ice, XXL, etc.). He sounds frustrated, pissed off, and  inspired. And awesome. “The Way I Am“, my personal favorite Eminem song of all time, has Em destroying the track and proves what I said earlier about his flow. Not all rappers can do what he did on this song (The beat is STILL sick by the way). The delivery is crazy: “I sit back with this pack of Zig Zags and this bag/Of this weed it gives me the shit needed to be/The most meanest MC on this — on this Earth”

Not to say this album doesn’t have it slip ups. It does but all are excusable. You know he’s gonna do a song like “The Real Slim Shady” for the radio. “Bitch Please II” may not exactly fit on the album but Em still puts his spin on it (“Awww naww, big Slim Dogg/Eighty pound balls, dick six inch long”). Even “Remember Me?” featuring RBX & Sticky Fingaz could have used better guests spots but it’s still serviceable.

I really don’t have to go over every track off this album. Most likely if your on this site you have at least given it a listen (To date, the album has sold more than 10 million copies in the U.S. according to Nielsen Soundscan). On “Careful What You Wish For” (Off Relapse), Eminem has this line about the critical views of his albums: “Every CD, critics gave it a 3, then 3/Years later, they’d go back and re-rate it/And call the Slim Shady LP the greatest/The Marshall Mathers was a classic/The Eminem Show was fantastic/But Encore just didn’t have the caliber to match it/I guess enough time just ain’t passed, yet/A couple more years, that shit’ll be Ill-matic” Naw Marshall, I knew immediatley The Marshall Mathers LP was the shit. And while I’m not to wild about your new one, I’ll give it some more listens.