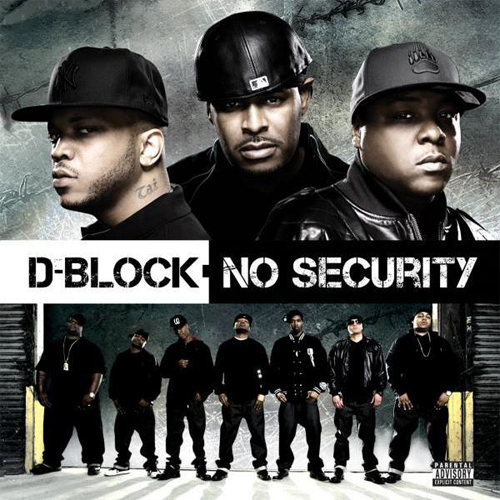 Jadakiss, Styles P, and Sheek are all established artists in the game, so now it’s time for them to take their shot at being moguls. That is what you have with No Security, D-Block’s debut album where they introduce you to: Tommy Stars, St Raw, Trav, Snyp Life, Bully, Bucky, A.P., Large Amount, T. Waters, Chary Ary, PLF, Lou Banga, S.I., Don D, and T.Y. D-Block consists of members from New York, North Carolina, Georgia, and California, so you can expect a little diversity among the group.

So Much Trouble
Sheek, Styles, & Bucky feat. Beanie Siegel; Produced by Vinny “King of Beatz” Idol
The album starts with a BANG with Sheek giving twitter shout outs, dissing skinny jeans, and auto tune. Beans lends a hot 16, and Styles drops his usual hotness. So far so good for D-Block.

Thrilla
Sheek, Snyp Life, Large Amount, & Tommy Stars; Produced by Toneheadz
I’m really not too thrilled with the R. Kelly sounding guy on the hook, and the song is on the corny side. I’m going to have to hit FAST FORWARD on this one.

Show Em
Don D & T.Y. feat. OJ Da Juiceman; Produced by Wayne Petti
These are obviously the southern members of D-Block hence the OJ collaboration. Don D and T.Y were actually pretty tight on the song; however, the weakest link on the song was OJ. If the song would have ended after they rapped…this song would be FIRE.

Get That Paper
Sheek Louch, Styles P, Jadakiss, & S.I.; Produced by Crada
This is your typical L.O.X. song…HOT! The Yonkers trio comes out the gate with a nice beat, a nice hook, and Sheek, Jada, and P give you what you want on this one. The song is smooth and this is what you want to hear from the LOX.

Get Ya Bounce On
Large Amount, A.P., & Bully feat. Webstar; Produced by The Twin
This song doesn’t feature either of the LOX and the track suffers because of it. The song is disposable and shouldn’t be listened to. SKIP!

From the Block
Sheek Louch, Styles P, Bully, T.Y., & Tommy Stars; Produced by Vinny “King of Beatz” Idol
This is the type of music that we like to hear from D-Block. Certain artists make better music when they stick to the script. When I check for D-Block, these are the kind of songs I want to hear.

That’s D-Block
Styles P, Bucky, Straw, Large Amount, AP, & Snyp Life; Produced by Vinny “King of Beatz” Idol
First thing that catches your attention is the production by Vinny “King of Beatz” Idol. This beat is SICK! I think Jada would have bodied this beat, but even without Jada the song is pretty tight. Styles killed it in the end. CHECK FOR IT!

Round & Round
Large Amount, A.P., Bully, & Tommy Stars; Produced by Jesus “Poobz” Fernandez
This is another track that does not feature SP, Jada, or Sheek, and you can tell. The concept is wack, (groupies) the beat is alright if you wanted to dance to it, but it just seems out of place on the album. SKIP!

Hello
Sheek Louch, Large Amount, T.Y., & Bucky feat. Red Cafe; Produced by Scram Jones
This is my favorite track off the album so far. T.Y. comes out the gate with Young Dro-esque lines like: “In Carolina I’m the black Pacino/orange Chevy with the white rally stripes like I drive Nemo”. SICK. The person that stood out the most to me was Red Cafe. I must say I have been sleeping on dude. This is a DOPE SONG!

Brother’s Keeper
Sheek Louch, Jadakiss, Styles P, & Bully; Produced by The Minnesota Boyz
This is classic LOX on this track; they overpower the beat with some real heartfelt lyrics. Bully didn’t fit in on the song, but with the work that the other guys put in made up for the suspect verse.

Hustler’s Prayer
Styles P, Bully, & Straw; Produced by Marcus D’ Tray
This track could have been done better, but it wasn’t. The production is pretty good, the only one that brought it was SP, but he needed some more help on the song.

Like That Ya’ll (remix)
Sheek Louch, Styles P, Jadakiss, A.P., Straw, & Snyp Life; Produced by Pete Rock
Don’t rub your eyes, Pete Rock produced this song. With the issue of good production out the window, all the guys have to do is bring their best rhymes to the table. They did. Of course the pups got shined on by the big dogs, but when you are rapping with some of the best to ever do it, you can’t hold your head.

They could have substituted some of the weaker cuts to include these as actual tracks and the album would have been better.

Bottom Line:
Now that the L.O.X. have put the boys on, the question now is do they have what it takes to make them stars. I can say that they have a nice stable of artists; all of them are nice to an extent. My problem with the album is that it got boring at times, especially the songs where there were no L.O.X. members present. The new guys can rap, they just need help writing hooks and a couple of the guys have delivery problems. I’m sure their intent was to focus on the new generation, but I think they needed more of the old generation to make this a solid album.