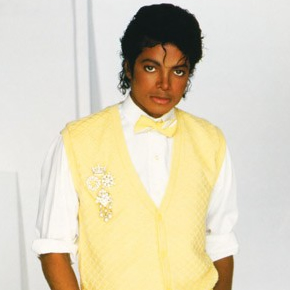 I don’t even know how to intro this. I guess with the fact that he’s gone. MJ died today of  apparent cardiac arrest in his home at the age of 50. I’m hurt, it feels like family…and no I’m not being overly dramatic. I can’t think of a person who has dedicated more of his life to peace, love, and just a good time in general. He has, what is surely to never be surpassed now, the top selling album of all times. I could go into all kinds of detail about his career and all that, but I want to share a personal experience.

I was really shy and quiet as a child. One night, I went to some function with my parents and there was music and a lot of kids around, so I ventured out there…bored. I had on my blue khaki pants, my white button up shirt, and my blue and gold Michael Jackson belt complete with Michael Jackson belt buckle…the picture was the one of him in that white outfit and the yellow vest. “PYT” came on (which is tied with “Say Say Say” for my favorite MJ song) and I got busy. I had the kicks, the moonwalk, the moves, the spins, I was doing it all. The kids formed a circle around me all clapping and smiling with joy. My parents caught a glimpse of me through the commotion and came to see me getting down. I haven’t been the same since. They always tell this story when folks as them, “when did this boy start acting so crazy.” It all goes back to them…of course, crazy being a tongue and cheek term.

My prayers go out to MJ, his family, and his friends. His music was inspirational and his life was dedicated to doing what he loved. You will be missed MJ. Rest In Peace.- Saule Wright

By now, it’s common knowledge that Michael Joseph Jackson has died at age 50 of cardiac arrest. What can I say about Mike? 13 Grammy wins (8 in one night!!), 13 number one singles (5 off one album alone!!), and 6 Guinness World Records with 750 million records sold worldwide; this man got busy. I don’t care what anybody says: Michael Jackson was without a doubt THE GREATEST PERFORMER OF ALL TIME! He had the dance moves everybody was trying to copy and the voice that everyone envied. He had haters all across the world too, but all throughout that bullshit, I was there, a loyal fan. We miss you, Mike. Rest in peace. – H2O

I’m still numb after hearing the news about MJ. I know I kid A LOT about things, but let me tell you that I was one of those MJ fans that probably would have fainted if I ever met him! I had the posters of him on my walls, the jackets, the gloves, and I even had the MJ doll! The man was bigger than music and he even though his stature was small, he was bigger than life. There will never be an entertainer that can achieve what MJ did in his 42 years in the music business. NEVER! I have a really heavy heart right now writing this so I’m going to keep it short. REST IN PEACE TO THE KING OF POP, MICHAEL JACKSON! You will never be forgotten! – King Jerm

Wow. I just knew he’d make it out the hospital ya know? I’ve been on the road the weekend of his death and I find my CD player jammed with his tunes and I genuinely felt empty that the man was gone.

He was an eccentric yes…but he was OUR eccentric. His imagination, vision, showmanship, and pure talent; even at his worst; is something all artists should aspire to get to. The man has crated songs that have sound tracked our highs, lows, parties, social changes, and our overall lives in his 50 years of life.

I wish he had more to give. It sounds selfish, especially after looking at how much he gave already. I’m just saying…I’ll miss him so. His art is his legacy and at least now; he’ll have a 2nd life beyond the unjust jokes, treatment, and scrutiny. He deserves to be remembered as a legend, nothing less. – Kareem Abdul Jamar