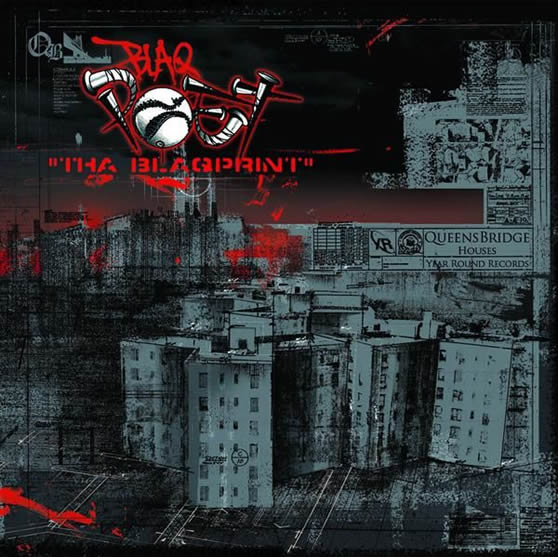 I always enjoy it when I get a chance to check out an album that I’ve been anticipating and waiting to hear, and in the case of Blaq Poet’s second album Tha Blaqprint, it fits that category. Even though this is only the Queensbridge native’s second album, he’s not a new figure in the rap game. As a matter of fact Blaq Poet has been around since the late 80’s when he was dropping lyrical bombs on KRS-One (“Beat You Down”) during the infamous bridge wars. Other than his early career lyrical battles, Blaq has been most known for his affiliation with New York rap group Screwball. This group was best known for the 2000 release Y2K The Album, which featured the singles “H-O-S-T-Y-L-E” and the classic “F.A.Y.B.A.N.”.

Blaq released his debut album Rewind: Deja Screw back in 2006, but things are different this time around as he’s currently linked up with DJ Premier’s Year Round Records imprint. With Premier behind the boards and the beats (13 out of 15) you’re about guaranteed a quality Hip-Hop product. Right from the jump Blaq Poet let’s you know exactly what you’re getting with this album. “I-Gititin” sees Blaq spittin’ some hardcore-laced lyrics over a pounding beat from Premier, which really sets the tone for the rest of the album to follow. Listeners expecting to hear another rap album full of Auto-Tune lyrics, catchy hooks, and gimmicky production will be sadly disappointed (were you really expecting that with a DJ Premier production?). Those that have been craving for a return to the better days of Hip-Hop music (read: 90’s Hip-Hop) will be satisfied to know that’s what they’ll get with this album. A throwback feel to those days is best heard on the track “Ain’t Nuttin Changed”, which served as the 1st single for the album. DJ Premier’s magnificent sampling and chopping of 3 different records blends nicely with Poet’s rough and rugged rhymes about how the hood is still the same from the last time he was there.

In a time where it seems like too many rappers are afraid to speak their minds and go against the grain of what’s popular or “hot” in the industry, Blaq Poet lives for the moment to speak just how he feels. That’s one of the strongest characteristics of Poet as a rapper, which is perfectly heard on the track “Don’t Give A Fuccc”. The pulsating beat produced by Premier gives way for Poet to do some aggressive shit talking and not really care who he offends (you saw the song title, right?). Throughout the length of this album Blaq Poet does a nice job of keeping the song topics diverse and not repeating himself too much in his rhymes. From speaking about the hood and hood politics (“Ain’t Nuttin Changed”, “Hood Crazy”) to drug dealing (“U Phucc’d Up”) to death (“Never Goodbye”) to violence and guns (“Let The Guns Blow”). One of the most interesting and unique tracks comes in the form of “Voices”, which sees Blaq telling about his beyond the grave conversations with the late Notorious B.I.G., 2Pac, and other deceased rap legends as well as some living about the grim state of Hip-Hop. Poet also displays his storytelling abilities on the tracks “S.O.S.” and “Sichuwayshunz”, which give listeners another insight into the mind and skill level he possesses.

Over the 15 tracks in total that span this album, the only negative aspect to be found is in terms of the album’s energy. At the start of the album through the first 3 tracks listeners are presented with strong energy in regards to the lyrics and production. But after that the album takes a dip in energy and quality somewhat with a couple average tracks before it starts picking back up by the album’s end. In handling a majority of the album’s production, DJ Premier provides Poet with some trademark bangers that are able to convey both the energy and topic of the songs. There are times though when the quality you come to expect from a legend like Premier isn’t presented as was the case with “What’s The Deal?”, “Legendary Pt. 1”, and “Hood Crazy”. These beats come off as bland and monotonous, and as a result limits the songs’ potential. The only other two producers (Easy Mo Bee, Gemcrates) featured on the album also do a quality job with their offerings (“U Phucc’d Up”, “Sichuwayshunz”) respectively.

In terms of Blaq Poet, he does what’s expected of him on the mic with his rhymes and stays true to himself as an artist. Blaq isn’t the type of rapper that’s going to deliver thought provoking rhymes or multi syllable lyrics. He’s a rapper that’s going to get straight to the point with what he has to say and he does a nice job of that on this album. Obviously this is an album that will receive much support from the underground Hip-Hop scene and will probably get overlooked by the mainstream/commercial audience… But quite frankly I think the underground listeners is whom Blaq Poet and DJ Premier were aiming for. This is one of those albums that should have a sticker on the cover stating “This Is Not For The Mainstream…Underground Only”. If you can make such a claim, this album is too Hip-Hop for the mainstream to understand and with that in mind it fits just find where it is. If you’re one of those listeners that have been waiting for some genuine Hip-Hop to listen to, you definitely need to pick up a copy of this album.