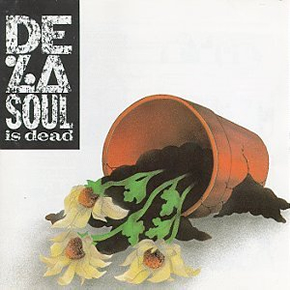 I noticed that none of De La Soul’s records have made in our Classic Material page, and I immediately decided to change that. A lot of you fans are gonna say: “What! De La Soul is Dead?!? Why didn’t 3 Feet High and Rising get any love?” We’ll get to 3 Feet High and Rising in time, but the reason I chose De La Soul Is Dead first is because that was the first album by them that I actually listened to. I thought the whole concept was cool: it was their second album, and already is was “De La Soul is dead…”. The cool thing about the whole album is it plays out like a storybook!

It’s starts out with a kid named Jeff talking to a couple of girls about how he found a De La Soul tape in the garbage. The girls beg to hear, but Jeff’s like: “NO!”, and the girls start buggin’! Then a bully comes by, beats up the little kid, and takes the De La Soul tape from him. After stealing the tape, the bully and his two friends sit down to listen to the tape. Hearing the bullies is actually funny as hell, it’s one of the things that makes the album great. The leader of the bullies is constantly talking about how wack the album is throughout skits on the album, and one of the bullies who actually likes the tape (voiced by Maseo himself) gets his ass kicked everytime he talks. The skits help to bring diversity the album, and, like I said, it’s funny stuff.

Now let’s get to music. Production, Prince Paul, you already know what it is. Prince Paul did his thing, as usual. It’s sad that as time went on, you began to see him gradually fade from the music that the group was making, but he definitely put it down here. All of the groups members were on point: Posdnous is, to me, the sharpest member of the whole group, but beyond even that he’s a really talented rapper who never seems to come up when people talk about best rapper. Don’t get me wrong though, Dave and Maseo definitely showed up on this album, with solid wordplay throughout the whole album.

The album had a bunch of memorable songs on it, too. One of my favorites is “Bitties In The BK Lounge”. Who could forget this song!? Posdnuos goes into a Burger King with one of his friends when the girl behind the desk pays them no mind, until she realizes he’s from De La Soul. Then, there’s the infamous second verse, where a manager of Burger King, gets confronted by an obnoxious woman and her friend. The two trade insults in rhyme, and it’s definitely one of the highlights of the album. “Millie Pulled A Pistol On Santa” has got to be the most memorable song off the CD: you can’t talk about De La Soul Is Dead without bringing this song up. It’s about a young girl who is sexually abused by her father, and ends up bringing a pistol to where he works as a department store Santa to shoot him. That’s classic storytelling right there. Also there is the unforgettable “A Roller-Skating Jam Named Saturdays”, featuring Q-Tip. That was just one of those nice, feel good vibes that made you want to get up and dance.

I could keep talking about this classic, but you probably get the idea. Pick this up if you can; De La Soul is different, but if you give them time, they’ll grow on you. At the end of the tape, the bullies comment: “That was it!?? What about the pimps? What about the guns?? That’s what Hip-Hop is all about right??” De La Soul was one of the few groups out there that didn’t have to change their image to be one of the fore-front groups in Hip-Hop, and this album is one of those reasons why they are so good.