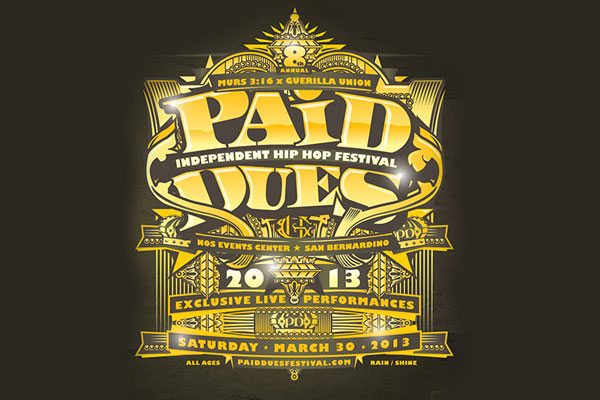 This is Murs x Guerilla Union’s eighth annual Paid Dues Festival. Previous shows have featured Wu-Tang Clan, Odd Future, Atmosphere, Living Legends, and more. This year may be Paid Dues’ biggest festival with three stages featuring artists like Black Hippy, Macklemore & Ryan Lewis, Trinidad James, Juicy J, Tech N9ne, Mobb Deep, Scarface, and plenty more. A few weeks ago, they changed venues from NOS Events Center to San Manuel Amphitheater. The drive may only be ten minutes away, but the venue is about three times larger. Supposedly, NOS Events Center sold its main parking lot, and there would be no way to fulfill this year’s capacity.

So I got a free ticket from my boy who couldn’t make it last minute. We drove from Vegas to San Bernardino that day, and arrived around 2:30 PM figuring we still had enough time to see Grouch & Eligh and Murs & Fashawn. Instead, we waited for nearly two hours in the will call lines. For being a respected venue, these guys didn’t know what the hell they were doing. They had will call lines split up by the first letter of your last name, Ticketmaster sales, TicketWeb sales, phone orders, & phone orders placed yesterday. I had to wait nearly an hour to get in, and then waited another hour before my friend got in (we both arrived at the same time). What the fuck? Not to mention, there is damn near no phone coverage which made things that much harder.