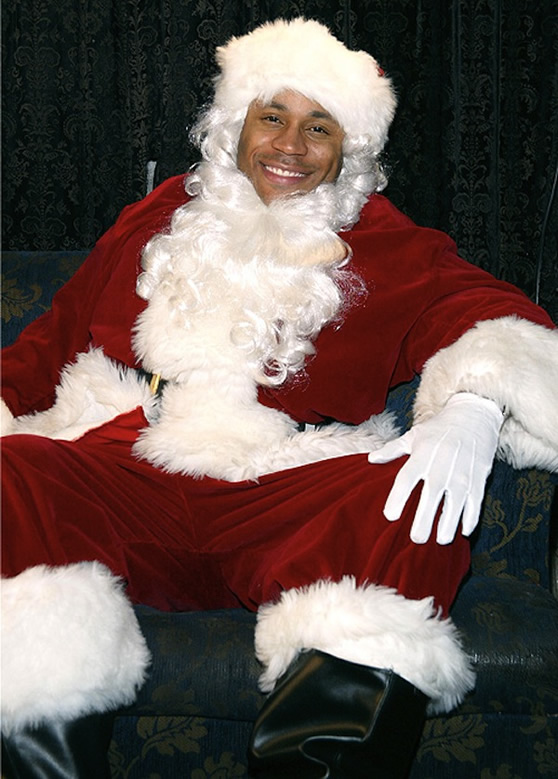 Happy Holidays Y’all, Big Brother Verb here to test out my theory: Hip-Hop and X-Mas just don’t mix. I mean, Is there such thing as good Christmas Hip-Hop? To me, saying “Good Christmas Hip-Hop” is like saying “Great Easter Rap” or “A Funky Thanksgiving Emcee”, feel me?

But still I see rappers steady putting out holiday songs and albums, so there must be a market for this stuff. Let’s you and me check out a few songs and find out if any of this stuff is really poppin’…
(Follow along on YouTube if you want or when available)

NO!! See this is what I’m talkin’ bout, this is cringe-worthy GARBAGE! NEXT!

Now see…this ain’t so bad. The beat goes hard and I actually like how the hook samples “Here Comes Santa Claus” and of course Luda does his usual thing…hmm, this is the right direction…

Ok, this one sounds like every other Kurtis Blow song. Seriously. Exactly the same. I mean if you’re not paying attention, it could be “Basketball” or “The Breaks”. So its up to your personal taste…whats next?

Ayo, now here’s one I can get down with, an ANTI-Santa song. Whoa, and I just heard him say “cracka”, so this automatically gets a thumbs-up from me. Any song that throws out the “cracker” or “cracka” word is an instant go for Verb. “Honky” too, shout out to Richard Pryor.

Cut Master DC – “The Night Before X-Ma
[DOWNLOAD]
I was about to type “AW WHAT IN THE BLUE HELL!…” but I wont front, I kept listening and this is kinda dope, lol

Quad City DJs – “What You Want For Christmas”

Atmosphere – “If I Was Santa Claus”

This might be the best Christmas song I’ve heard yet. Ant samples “Oh Holy Night!” and Slugs spits some knowledge about whats he’d do if “he where a rich man” (which in a way makes it a Hanukkah song too right?)

Ok, we’re now back in Horrible Town. This song makes me wanna shit on something.

YEAAAAH! This is retarded!!!!…..seriously they made a whole album of this kinda mess? Who’s buying this? This is the kinda stuff you’d try to give away an’ get met with “uh, naw thats alright” and an awkward smile.

Zoe is one of my guilty pleasures. (I was the dude sayin to people “no for real, just listen to ‘Echo’, its actually a dope track, Zoe goes off on the sangin!”) So I’m actually kinda feelin’ this one. But its not REALLY a Christmas song is it? I mean it IS…..but not really. Its more about bitches and blang than Christmas.

I’m told Teddy Pinnedherassdown just released this one for Christmas, and usually I’m a fan of his work, but this is just too plain and too much Auto-tune. The beat is kinda fly tho…

This is the shat. A totally X-Rated Christmas song from Eazy. This is the kinda song you might forget is on your iPod and then it comes on when Moms is over visiting you have to run over and change it before you catch that look from Momma. You know the one.

This is kinda dope, I’ll admit. Its got that funky old West-West vibe and Nate Dogg on the hook, so I’m having a hard time Scroogin’ out on this joint.

Again, not really a “Christmas song”, but this one is so dope, I couldn’t help but include it

And finally, because I’d probably get hate if I didnt include it…

This is probably what most people think of when they think of “X-Mas” and “Rap”. And it feels like every artist that tries to do a Christmas joint is trying to do their own version of this one. But you can hear why. Its just a really fun song with a classic old school beat. And even tho you’ve heard it as million times, when it comes on in the Mall y’all know y’all still rap along “Niiiiice”

Final Conclusion:
I still think Christmas and Hip-Hop make an odd pairing. It seems like unless you’re doing a comedy song or a sad song, then it might end up in Ying-Yangville an come off douche-chill inducin’ (And none of us wants to live in Ying-Yangville. We might pass thru, but otherwise….)

Am I wrong? Let me know what you think and/or what your favorite Christmas Hip-Hop song is in the comments!