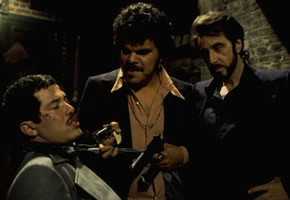 Do I really need to state the influence of the movie featured in this week’s Friday Night ‘Fro? I mean, didn’t Fabolous just release an album based on and inspired by Carlito’s Way? And when I say “based on”, I mean it only shares a likeness in name, a likeness in artwork, and they both contain something named “Pachanga”. Putting aside my obligatory Jay-Z reference to the film (“I played him like Benny Blanco, mano a mano” – Jay-Z on “Bring It On” off Reasonable Doubt [1996]), even with all the Hip-Hop references to this film, I don’t think a lot people have actually seen Carlito’s Way (Especially the youngsters of today). If you know the Jay-Z line I tried not to mention earlier, you should probably watch it. If you like the movie Scarface, you should probably watch too (This 1993 movie did bring back together Scarface director Brian De Palma and Tony Montana himself, Al Pacino). If you like shootouts, criminals trying to go on the straight and narrow, and a bearded Pacino, you should definitely watch it.

And don’t look for me to post the direct-to-dvd prequel Carlito’s Way: Rise to Power. Too much Diddy and no Pain In Da Ass.