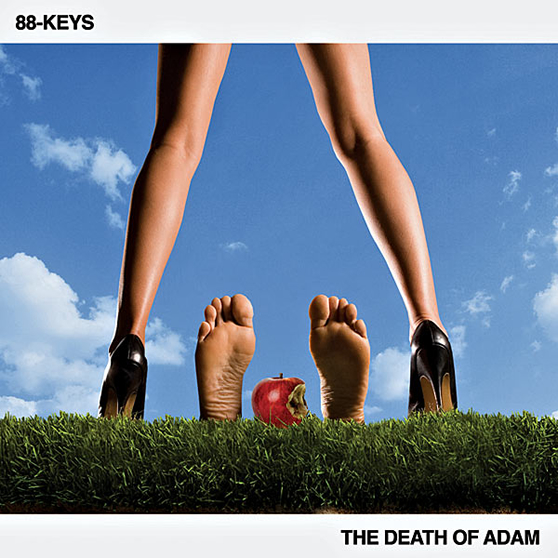 One thing I’ve always liked about Hip-Hop was the creativity. And in today’s time when we see a lot of Hip-Hop albums come with the same formula time and time again, I always applaud any artist trying to show imagination with their craft. One album from last year that I thought was original was 88-Key’s concept album, The Death Of Adam. The album was originally reviewed for nappyafro by our old friend Guy Fawkes, and was rated 2 Stars out of 5 (Check that out here). Now, I actually felt the review was thought out and well written, but I don’t think the homie Guy gave it it’s due. To me, The Death Of Adam was on my list for 2008’s best.

Being that The Death Of Adam is a story driven concept album, it follows the story of Adam (the main character), a typical guy searching for sex anywhere he can find it. Adam meets a dime, dates her, and is shot down when he tries to take it to the next level. Then Adam moves from the ex-girl to the next girl, who he finds in a nightclub apparently. This is where it got confusing. They have sex, but Adam can’t please her, but they stay together still until Adam’s life comes to an end… (Most of that description was taken from Guy’s original review). Now, the concept may seem routine, but the music that tells this story really brings it through. With all the tracks produced by 88-Keys, the album is cohesive while still being entertaining and keeping on the path of the story (Adding the narrator was a nice touch too). And where 88 lacks with the vocals (What up with the distortion?), he enlists the help of other artists like Redman, Kanye West, Bilal, Kid Cudi, & Phonte.

The album gives you an assortment of different styles. It has quality R&B tracks like the J’Davey assisted “Dirty Peaches” and the Bilal featured “M.I.L.F”. It has straight Hip-Hop tracks with talented rappers taking the reigns like “Close Call” with Phonte, Redman on “The Burning Bush”, and the first single, the Kanye featured “Stay Up! (Viagra)”. There’s even some good instrumentals thrown in for good measure like “There’s Pleasure In It” and “No. I Said I LIKED You”.

There are moment when you need time for an album to sink in for you to truly appreciate it. Had this happen with Guy Fawkes 10 months after reviewing it? Well, I contacted Mr. Fawkes via e-mail and here’s what he had to say on the album:

For whatever reason, I didn’t really like that album. The production was alright, but the vocals were what really turned me off. There were a few songs that were pretty decent, the one featuring Phonte and a few of the instrumentals, but otherwise I really wasn’t feeling it. It might be worth another listen though.

There you go. I guess Guy is stick to his guns. The album may not actually be for everyone; it does have that experimental feel too it. Will I change the rating on the original review? Hell no. What am I, Benzino? The original reviewer can only change the rating. All I’m saying is that if you gave it a listen wasn’t feeling it, it may be time for the second go around. And if you like concept albums or creative music and you haven’t gave this a listen, you may be in for a treat.

Note: Shout out to Guy Fawkes for writing the original review as well as the additional insight 10 months later. You can holler at him at his new crib illcuts.com.