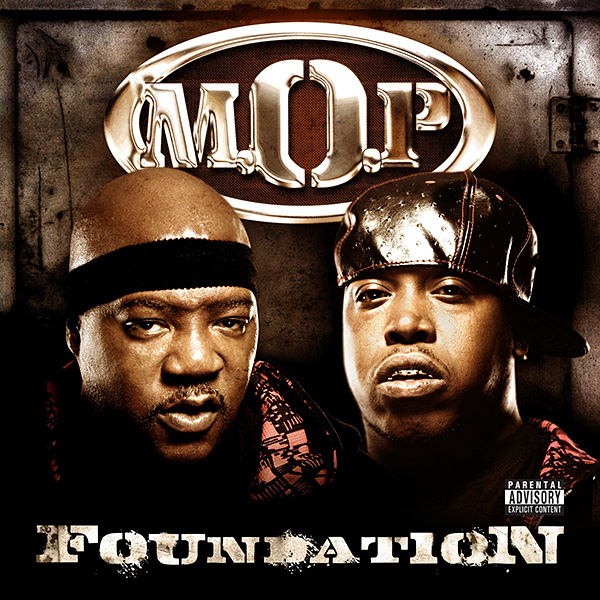 If one was to look for the definition of classic hardcore New York Hip-Hop, look no further than Brooklyn’s own M.O.P. For over 15 years, Lil’ Fame and Billy Danze have kept it consistent creating adrenaline fueled fight music. Not to say their careers hasn’t been with setbacks. After doing separate unfulfilled stints with both Roc-A-Fella and G-Unit, the firing squad is finally releasing their first official studio album since 2000. Does Foundation still hold true to the group’s rugged roots? How about some hardcore?

1. I’m A Brownsvillian
Produced by Nottz
Backed by heavy guitar licks, this serves as a good opening for the album. The sound is definitely a M.O.P. track as the group reps for their hometown: “Yo I’m a Brownsvillian/Chillin’ and I don’t get a fuck about a killing/Cause I stealing the fact when you illin”. So far, it seems like nothing has change for Fame and Danze.

2. Blow The Horns
Produced by Fizzy Womack
The title for the second track is appropriate since the Fizzy Womack’s (aka Lil’ Fame) production for it is straightforward and of course, horn heavy. The subject matter covers the usual topics (“You ain’t like me/Nigga you a punk…”). All in all it’s an average song. Busta Rhymes was originally on the leaked version of “Blow Your Horns”, I don’t know the reason he didn’t end up on this one.

3. What I Wanna Be
Featuring Rell; Produced by DJ Premier
The Mash Out Posse and long time collaborator Premier link up for what may be the best track off Foundation. The song slows things down a bit and the sample used here perfectly fits. Ex Roc-A-Fella crooner Rell is on the hook and doesn’t sound out of place either (“I wanna be just what I see/Hustler and baller…”).

4. Foundation
Produced by M-Phazes
On the title track, Lil’ Fame and Billy Danze talk about the “blood, sweat, and tears” they put into the game and building their legacy (Well, I guess that’s roughly what they’re saying). For some reason, the beat reminds me of something that G-Unit would rap on. The production is well done, but I could see the song coming off boring. Check for the New Jack City sample at the beginning.

5. Stop Pushin’
Produced by Fizzy Womack
Lil’ Fame continues his love affair with putting a lot of horns in his production. At first the songs threw me off with the opening, but the track changes up becomes more serviceable. I also liked the sample used on the chorus. The hook itself sounds lazy but it’s your standard M.O.P.; “The next motherfucker that push me/I’m going right up side your motherfucking head!”.

6. Crazy
Featuring Termanology; Produced by Statik Selektah
Massachusetts is most definitely in the house when Termanology and Statik Selektah join the party. The beat Statik provides (Complete with signature scratches) fits M.O.P. style while still keeping his own. Termanology also did his thing but sounds a little out of places between Fame and Danze.

7. Street Life
Featuring Demarco; Produced by Fizzy Womack
This was the first song I heard from this album. With dancehall singer Demarco auto-tuning it on the hook, this is as far as commercial appeal as your gonna get from this duo (It’s better than that shit Dame Dash had them doing with Posh Spice). The beat is laid back and gives room for the theme of harsh street life.

8. Forever & Always
Produced by Statik Selektah
“This is for all the motherfuckers that forgot about M.O.P.”. These words spoken by Lil’ Fame basically describe what the song is about; the group gives a short history lesson of their past. On Statik second beat for the album, he gives vintage New York production.

9. Rude Bastard
Produced by Kil Beats
The one thing that first jumps out is the sample used. Which is funny because there has been a lot of controversy over who actually found the sample and produced this track (It’s basically been alleged that Lil’ Fame stole the beat). I personally think the track presented here is average; nothing too memorable. I listed Kil Beats as the producer because Fame released a statement saying he didn’t produce it. If you wan more of the confusion around this track, you can go here and here.

10. Brooklyn
Produced by Fizzy Womack
What’s a M.O.P. album without a dedication track to Brooklyn? I actually like the beat on this one, it’s the hook that I think falters a little. But then maybe if I was from BK I’d like it better. It’s not the best homeown dedication I’ve heard but it’s definitely not the worst. They put on for their city.

11. Bang Time
Featuring Styles P; Produced by DJ Green Lantern
Even though I don’t believe music necessarily causes violence, this will have you pulling down your fitted and thinking about shanking somebody. M.O.P. is in their element when they spit that “Ante Up” shit. Add Styles P to the equation and it’s even more dangerous. Nice job on the beat too Green Lantern,

12. Sharks In The Water
Produced by DR Period
You wanna know how you know a song is gangster? The beat uses gun cocking sounds. Other than that, the song is functional; not filler but not noteworthy either. M.O.P. spits more aggressive shit.

13. Riding Through
Featuring Redman; Produced by Fizzy Womack
This beat straight away reminds you of something that Redman or Erick Sermon would produce. I guess I was wrong because it credits Fizzy Womack (But then again…). Being that this Red’s kind of beat, I was kinda disappointed he didn’t murder it (He wasn’t bad). The story told after the song is worth a listen though.

14. Salute A G
Produced by DR Period
Over another horn heavy beat, M.O.P. ends the album explaining why you should respect them (“Salute a g when you see one/Put four fingers up to your forehead/ And tuck in your thumb”). This songs works as worthy ending and the production by DR sends them off like they entered.

Bottom Line:
It’s good to see that after over 15 years in the game M.O.P. still sounds aggressive. It’s not often you see a Hip-Hop group consistently keep true to their style of music. And this is also a drawback. Most of the tracks here are well done, but you get the same kind of tracks almost all the way through the album. For somebody not wanting this sound for a hour straight, this can become tiresome. But for a hardcore M.O.P. fan, this is great news. M.O.P. is still keeping it gutter and once again crafts an album full of fight music.