DMF of the Week: Kanye West 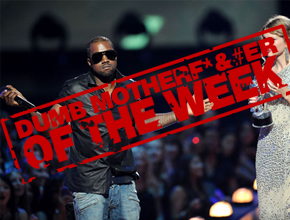 Glad I got back from Philly in time to write this…what do you get when you add a bottle of cognac to one of the world’s biggest egos?? Taylor Swift in tears, apparently. Damn. Kanye has jumped on stages before bitchin’ about not winning when he thought he deserved one, but he was out of line here for couple of reasons. First, Taylor Swift has never won a VMA before; it was her first ever award from MTV, and ‘Ye pretty much killed that moment for her. If somebody jumped on stage when Kanye won his first award, I bet he’d have something to say about it.

Second, he was even fighting for himself! He was fighting for…wait for it…Beyonce! Now I know Beyonce and Kanye are good friends, but can you even NAME all the awards that Bey has won in her career?? Plus later on that night, Bey ended up winning Video of the Year, so that kind of made Kanye look like a dumbass even more.

It was a good look for Beyonce to bring Taylor Swift back on stage with her. We all thought Kanye had calmed down after his mother’s death, but what he did here obviously shows that he hasn’t changed much at all. Kanye’s apologized like 3 times already, but c’mon: if Beyonce hadn’t won Video of the Year, do you seriously think Kanye wouldn’t have called MTV racist like he did two years ago??

Does this mean that I’m no longer a Kanye fan? No way, the man has a huge ego, but he makes damn good music. But for his actions Sunday, he is without a doubt THE DMF OF THE WEEK!