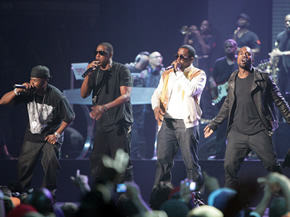 You can say a lotta things about Jay-Z, but one thing you can’t say is that he didn’t shut down The Garden on Friday night. Fuse had been heavily promoting this concert for a minute and I think it lived up to the hype. Hova performed everything from “Jigga My Nigga” to “Venus Vs. Mars” to “Public Service Announcement” to “Where I’m From”. With Memphis Bleek playing hypeman, Jay-Z didn’t slack on the guest appearances either: Santogold, Kid Cudi, John Mayer (Who killed on the guitar during “Death Of Autotune”!), Rihanna, Kanye West, Beyonce, Pharrell, Swizz Beatz,Mary J. Blige, & Diddy. I think it’s things like this that reminds people of who Jay-Z is. I thought I was assed out on seeing this because I wasn’t gonna make that trip up to NY and I definitely don’t think my cable company carries Fuse (The channel the concert was shown on). But then again this is the internet. Shout out to youraudiofix.com for the USTREAM. Check out the video of the concert below.