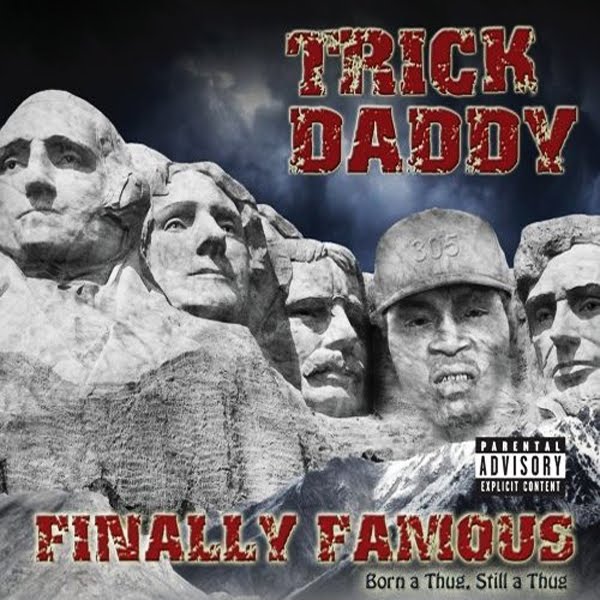 Trick Daddy has to be one of the realest rappers still doing it. No matter what, Trick never changes his style, image, or his content. Finally Famous: Born A Thug, Still A Thug is his 8th album, and the “thug” is still present in the title, and his music is still for them same thugs. To understand Trick you have to be in touch with reality and know what he has went through in his life to feel his music. If you don’t like T Double’s music…stop reading this review right now. Now that we got all the fugazi’s out, let my LIVE cats get on with the review.

Intro Skit: Only 1 Mayor
Featuring Rayzor
This is a skit, but I really feel some subliminal jabs. MY NIGGA TRICK!

This Tha Shit That I Live
First song out and Trick comes out the gate SWINGING! This is T Double at his finest. Notice how he says he’ll send shots at your ’04 Maybach? I wonder who he was talking about. First song out and he has already laid a BANGER down.

Da Realist
Featuring KC; Produced by The Runners
Trick does something on this track that comes natural to him…BEING REAL! Trick shows why he is the blueprint for every rapper to come from the Sunshine State. T Double just gives you his some history on this track, and if you are a fan like me, this song gives you some background info that you might have not known. HOT!

Gangsta Music
Featuring Dunk Ryders
Trick brings out his group Dunk Ryders on a track that is basically paying homage to all the music that sculpted him into the “gangsta” he is today. Dunk Ryders left a good impression on me after this one, along with the production on the song.

Skit: The Collection Call
Featuring Kanesha Curry
Straight comedy. Everybody gets these calls, and I wish she was here to answer my calls. HILARIOUS!

Everyday Struggle
Featuring Janet Lawrence
The production on this song is DOPE! Sounds like a beat RZA would have made in his heyday. Trick sticks to the script and delivers another gem that MOST can relate to in these days and times…STRUGGLING. Trick is highly respected and loved by the streets because of songs like this.

What Dey Do
Featuring Bad Guy & Desloc; Produced by TracKings LLC
When you have a formula that works for you…you don’t change it. Trick knows what his fans like and he keeps giving them what they want. Hard beats, hard lyrics = REAL NIGGA MUSIC.

Count My Money
Featuring Murk Camp; Produced by Goldru$h
Trick wasn’t trying to cross any regional lines with this album like he did on Thug Matrimony and Thug Holiday. He is keeping his sound in state for the most part, not worrying about satisfying other regions. I prefer the Mayor to stick to his format of making music for the Sunshine State.

Bitch Azz Niggaz
Featuring Ballgreezy
The title says it all and all of us know some “bitch azz niggaz” so don’t act surprised if you find yourself singing this about some cats that you know. REAL NIGGA MUSIC.

I Can Tell
This is Trick’s song talking about “hoes”. Trick isn’t putting them down; he’s just talking about the kind of hoes HE likes. The song is funny, but not funny to the point that is corny. He is a descendant of Uncle Luke, so topics like this aren’t foreign to him.

Why They Jock
Featuring Ice “Billion” Berg & Murk Camp; Produced by Mizzle Boy
This sounds like a song that you would end an album with, but Trick is the mayor and he goes by his own rules. The song is alright, I like the hook better than the actual verses, but the whole song still goes hard. I can’t even be mad at Trick for this one.

That How We Do It
Featuring Betty Wright
The beat sounds like one that you would hear any HBCU band playing during the game. Call me crazy, but this song makes you think about FOOTBALL. I know that was off topic, but each time I listen to this I start thinking about a 4th and goal.

Homie Song
You knew it was coming sooner or later, but Trick always does one for the cause. This time he is doing one for all the ones locked up or dead for one reason or the other. We all know someone in the bing or someone in the grave…this is for them. MOMENT OF SILENCE.

Strong Woman
Featuring Jackie Henton
This song pays homage to all of those single mothers that have been raising kids by themselves, playing Mom and Dad. Coming from the same kind of situation, this song tugs at the heart. REAL NIGGA MUSIC.

Skit: The Pick Up
Featuring Benji Brown
Another skit, and more hilarious moments.

Ghetto Supa Star
Featuring Erin Lynn
Trick goes in a little light on this one, I know what he was going for on this one, but I have to question why it was placed here.

Tears Of A Grown Man
Featuring Shonie
Trick does not get all introspective all the time, but when it’s dealing with the streets, Trick goes in. When I say “go in” I’m not talking lyrically. I am talking about things that really matter. Trick has a way of saying things the way HIS audience can interpret it.

Bottom Line:
Trick laid down the blueprint for ALL of the Florida rappers out there. So if it feels like you heard a little Plies in his music…you did. If you heard a little Ross…you did. The list goes on and on. Me being a fan of T Double’s music, I have to say that I am satisfied with this effort. I wasn’t expecting to see the throwback TDD on this album, but who knew he still had it in him? Like Trick said, he is getting better over time, and I have to agree with the big homie on this statement. Is this a classic like Book of Thugs? No, but Trick brought it back to the 305 with this one, and the home team should be pleased that their Mayor is still speaking for them. If you like Trick Daddy’s music, then this one should definitely be in your collection.