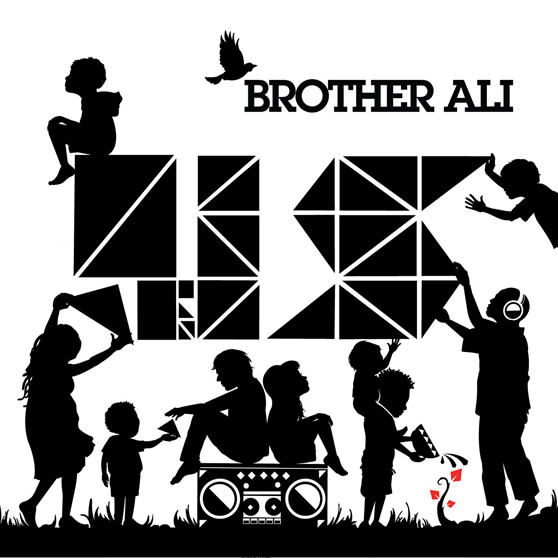 It’s been nearly ten years since Brother Ali’s debut album Rites Of Passage (Which I’m still trying to get my hands on) was released. Little has changed since then. He is still putting out superior albums release after release…even his EP’s stay positively consistent. What makes Brother Ali albums different from others is that he puts all of his heart into these records. Some of his songs like “Picket Fence”, “Walking Away”, and “Faheem” are some of the deepest songs I have ever heard. This is just a sample of his personal songs. He also has the lyrical abilities to put out down-to-earth gems like “Forrest Whitiker”, “Daylight”, and “Good Lord”. Furthermore, there are songs where he can just talk shit, “Missing Teeth”, “Bad Mu Fucka”, and “Lookin’ at Me Sideways”. The bottom line is that Brother Ali is a truly gifted emcee who has blessed the hip hop game. Now let’s get into the album.

1. Brothers & Sisters
Featuring Chuck D & Stokley Williams; Produced by Ant)
The album starts off as righteously as it possibly can with a lovely gospel handclap. As the choir kicks in, the legendary Chuck D drops some words of wisdom to introduce Brother Ali. This is a great and beautiful way to start the album.

2. The Preacher
Produced by Ant
Ant takes no time to “turn it up!” as the late great J Dilla liked to say with the loud horns and electric guitars on “The Preacher”. Ali opens up telling you a little something about him and what he’s all about. Ali is best known for his superb lyrical skills, but here he shows that he has delivery as well. Nice solid track.

3. Crown Jewel
Produced by Ant
The horns return on “Crown Jewel”, but the bass has improved compared to the last track. The lyrics on here are dazzling with metaphors. This is a great song that’ll help you get through a stressful day. Probably not a standout for most people, but one for me.

4. House Keys
Produced by Ant
The real storytelling starts on “House Keys”. Ali tells us how he moved to a smaller apartment downstairs (of the same building) to save money on rent. He has new neighbors upstairs who are apparently drug dealers. Through many nights of unruly behavior upstairs, Ali decides to rob the place when they are gone with his old house keys haha. Favorite track so far. Once again, Ant displays why he is one of today’s most underrated producers. The beat reminds me of a dream. On a side note, this beat would really fit a Del Tha Funkee Homosapien song. I would like to hear them together.

5. Fresh Air
Produced by Ant
Ant uses yet another diverse approach on this beat. This time he brings a more soulful jazz sound for Ali to spit. Ali goes on to talk about life and what he has gone through (especially in the last two years – marriage, birth of his daughter, etc). This is a nice song that goes along with the album.

6. Tight Rope
Produced by Ant
Ali is really starting to master the art of storytelling. On “Tight Rope”, he comes with three different stories about unwanted kids. The first story is about a girl that is having a hard time being accepted into the American society after moving from her native country (Somalia) because of a civil war. The second story is about the difficulty of a boy growing up when his parents are going through a divorce. The final story is about a homosexual boy, and the cruel reality of how he is treated because of his sexual orientation. This is just the start of deep songs coming off the album. Standout.

7. Breakin’ Dawn
Produced by Ant
Brother Ali’s storytelling continues on the bluesy “Breakin’ Dawn”. This is a detailed story about a man who discards the likes of success to stay true to his roots. You don’t hear many songs like this, but Ali does an incredible job with it and to get his point across.

8. The Travelers
Produced by Ant
This is another moving song about racism and the harsh actuality of our (slavery) history. Not only does Ali touch on topics that most emcees won’t do, but he constantly does it in an intellectual way. His words paint a picture for us to see and recognize.

9. Baby Girl
Produced by Ant
Baby Girl starts with an emotional -type beat, and Ali gradually begins to narrate about a female who was raped at a young age. What makes Ali’s narratives superior to others is that he does an excellent job of explaining how the person in the story feels. For example, “How can she find peace in her mind when love means returning to the scene of a crime?” Another brilliant thing about this song is how he responds after every verse, “Only one thing I can say in truth – got to deal with the demons before they deal with you”. The realest line(s) in this entire song.

10. Round Here
Produced by Ant
Ali breaks away from the storytelling for a minute to hit us with a nice laid back track. Once again, he shows you that he has delivery by how well his flow fits the beat. Besides that, there is nothing too significant here compared to the rest of the album. Although, it still puts out good musical vibes, and I consider it solid.

11. Bad Mufucker Pt. II
Produced by Ant
This is the sequel to the same titled track on his extended play, “Champion”. This one has a different method compared to the last. On this song, he is flat out telling you he is a bad mufucker, whereas the first song explains why he is. I’m going to relate my opinion like the ending words on the previous song “Round Here”, “Brother Ali, you a bad mufucker man”.

12. Best @ It
Featuring Freeway & Joell Ortiz; Produced by Ant
This is a lyrical ambush. They all came with it, but I have to say Joell Ortiz slaughtered (no pun intended) the track. He has an ill metaphoric line bar after bar on this and clearly shows why he’s the best @ it. Another thing I like about the track is how Ant slightly changes the beat for when Brother Ali comes on…worked well.

13. Games
Produced by Ant
This is an additional song about life and the numerous struggles people go through. He makes a good point that there are people out there willing to make their lives better compared to others who stay shackled up. Here is a short example from the chorus, “It’s like chains on your neck with a tight grip/Use your brain and shit, you might live”.

14. Slippin’ Away
Produced by Ant
“Slippin’ Away” is a song about one of Ali’s friend who got caught up in the street life. Ali starts off explaining how he moved to Minnesota and his early childhood. He goes on tell us about the friend – how they met, how they became friends, and their last conversation together. I’m not going to tell you the last part of the song. I’d rather have you listen to it yourself to find out what happens. A really deep and personal song by Brother Ali. Another one of my favorites from the album.

15. You Say (Puppy Love)
Produced by Ant
Ant drops a lovely loop (drums, sample, everything) for Ali to express his emotions of puppy love. Ali changes the direction one last time expressing how he feels for a certain somebody through his lyrics.

16.Us
Featuring Stokley Williams; Produced by Ant
The album returns to the same handclap vibes on “Brothers & Sisters”. The only difference here is Brother Ali chooses to rhyme over this one. The lyrics on this help explain why he named this album Us. Perfect way to end the album.

Bottom Line:
Sixteen tracks later, and I can say there is absolutely NO filler on this. Brother Ali has once again released a significant album for the year. What more can you ask for? – Great beats, superb lyrics, and outstanding concepts. What I like about Brother Ali is that he doesn’t straight out tell you what his stories are about. You actually have to listen & get hints, and the story comes together in the end. It’s an impressive way of writing. So do Hip-Hop a favor and pick this up. It’ll be worth the fifteen dollars. On a side note, Ali is a great performer too. I saw him at Paid Dues this year and was pleased. He is currently on the Fresh Air Tour with Evidence. Check it out if he’s coming to your city. Peace.

nappyPicks: Every song is good in its own way, but if I had to pick 5, it would go a little somethin’ like this…“House Keys”, “Tight Rope”, “Baby Girl”, “Bad Mufucker Pt. II”, “Slippin’ Away”