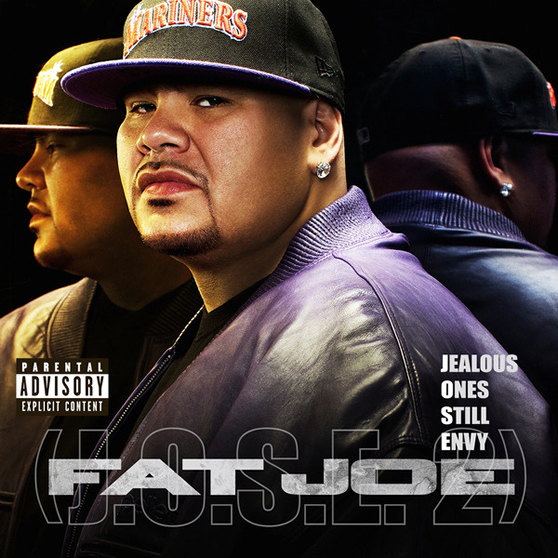 Fat Joe is a Hip-Hop pioneer in his own right, having put YEARS in the game, rapping with some of the illest MC’s out (D.I.T.C), and he had a couple of protégés under his wing (Big Pun, Remy Ma). But times have changed and so has his crew. Long gone are the days of Pun, Remy is doing a bid, and Joe has been in a public skirmish with 50 Cent years. Joe has not given his fans that “personal” album that they have been waiting on. This is the year of sequels (Blueprint and OB4CL2); will Fat Joe’s be considered on that list of “New Classics”? Let us find out!

Winding On Me
Featuring Lil’ Wayne & Ron Browz; Produced by Ron Browz
Fat Joe didn’t take long going after the younger club crowd with this one. This shouldn’t be a surprise considering this is the same guy that brought you “Lean Back” and “We Thuggin’”. I know people give Ron Browz a hard time, but I kind of like this song, maybe the Wayne feature helped. This beat sounds similar to “Pop Champagne” but the club crowd will still eat it up.

Joey Don’t Do It
Produced by DJ Infamous
The production on this song is SICK! I’m pretty sure this is a sample from some Doors Hendrix song, (guessing) but DJ Infamous did his thing on the track. I can’t sit here and act like Joe didn’t do the production any justice, he did, just wish the song would have been longer than 2 minutes.

One
Featuring Akon; Produced by The Inkredibles
It seems to me that every song Akon is featured on sounds the same. This is Fat Joe’s ode to keeping it real with ONE woman. I can dig it; I just don’t like Akon on the track. WHY? They could have gotten a legitimate R&B singer to do what he did on the song.

Aloha
Featuring Rico Love & Pleasure P; Produced by Rico Love
I guess Joe is keeping up with the ladies with the last two tracks. On this track it sounds like Joe is endorsing TRICKING. I really don’t like the featured artists on the song, they could have been left out, and maybe been replaced with Ne-Yo.

Put You In The Game
Featuring T-Pain & OZ; Produced by Schife, G-Boi, & Joe Boom
Three straight songs aimed at the females? This one is executed better than the previous songs with T-Pain on the track. What stands out to me is the production. The bass will have the sound systems working overtime. I can see know this will be a favorite by the females.

Congratulations
Featuring Rico Love & T.A; Produced by Eric Hudson
I like the feel on this song, but this might not be a crowd favorite. This production is simple, but sometimes simplicity makes good songs. The hook is on some “Empire State of Mind” or some Kanye influenced music. Whatever you want to call it…I’m feeling it.

Cupcake
Featuring Benisour; Produced by Schife
Now Joe is going back to his Young Jeezy roots. I know this is what is hot in the streets right now, but certain things Joe is too old for. This is one of them topics. I don’t want to hear 40 year old rappers talking about moving work. Leave that to the new cats out there, you better than this Joe.

Ice Cream
Featuring Raekwon & T.A; Produced by T-Weed
This is the song I have been waiting for from Joe. The production on this one is Johnnie Walker Black SMOOTH. Once again Joe’s subject matter is going at the females, which is okay, but the production makes up for the questionable subject matter. Raekwon doesn’t sound too enthused about rapping on the track, but maybe that is the way he sounds.

Okay Okay
Produced by Andrews “Drew” Correa
Joe has gotten some good production on this album, and he didn’t waste the opportunity to make decent songs. The only problem I have with this one is the hook. Joe could have done much more considering the subject matter and the production. The song is still FIRE though.

Blackout
Featuring Swizz Beatz & Rob Cash; Produced by J Buttah
It’s kind of funny seeing Swizz featured and not behind the boards on a song. This time Swizz does his best to get the crowd amped on this one. The beat will have all the girls off the dance floor, and nothing but the LIVE NIGGAS will be left standing. Joe definitely mixed some South and North on this one. DOPE.

Music
Featuring Cherlise; Produced by DJ Infamous & Slick
FINALLY, Joe gives a song that lets us into his life. Joe doesn’t understand that he is a likable guy that his fans really don’t know him. Joe drops some gems on this one, “They say Joe too selfish, he won’t let us in the door/I say, Shit, I could’ve left Pun in front of that store/Could’ve left Remy Ma ass in Castle Hill/Where every other day another nigga get killed?/They say, What’s Cool without Dre?/I say, Shit what if them niggas never met Jose?/LV was a great DJ/Now he produced “Roc Boys”, headed for a Grammy/What if I would’ve told Khaled to stop buggin’ me??He’d probably never be president of that company/Shit, you probably would have never heard the movement/I ain’t gotta talk, I ain’t gotta prove shit/Scott Storch was the best, they kept sleepin’ on him/’Cause he’s a white boy, he kept ghostbeatin’ for ‘em/Dropped “Lean Back”, and that shit hit/And guess what? I made the nigga rich, cocksuckers.”

Bottom Line:
Joe still didn’t give us THAT album that we wanted, but don’t let that sound like this album is a failure. I don’t know what album Curly was listening to, but this one is ABOVE AVERAGE. Joe did go at the ladies on a third of the album, but seeing what his recent successes with the singles have been, I can’t fault that at all. I really don’t believe he had any major slip ups, just some questionable features, but the songs I felt weren’t the strongest were some of the songs aimed at the ladies. All in all, Joe can be happy with this release, and with the right timing with the singles, he may come home with a Gold plaque.

nappyPicks: “Winding On Me”, “Joey Don’t Do It”, “Congratulations”, “Blackout”, “Music”