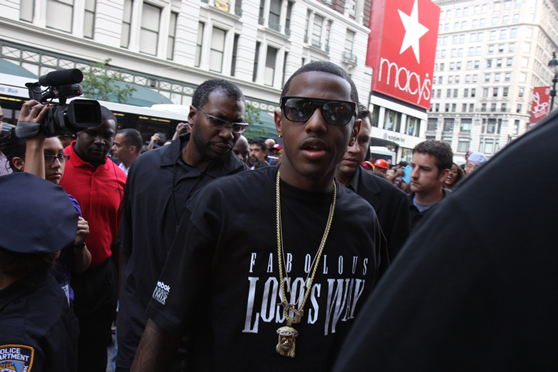 It’s been a while since I actually did an iPod Hustle column that was totally random. Just three songs off my iPod that really have no connection but were good listens nonetheless. In this edition, we check out some 2008 F-A-B-O, a smooth cut fromSa-Ra Creative Partners, and get Automatic Gunfire from G-Unit. Set your iPods to Hustle please…

Download: Fabolous – “Fall Back”
Mixtape: There Is No Competition [2008]
I’m sure I’ve already written somewhere about how the Fabolous & DJ Drama mixtape, There Is No Competition, was way too slept on for how good it was. It definitely was one of the best mixtapes put out in ’08. One gem off there was “Fall Back”. It’s filled with the slick wordplay that made Hip-Hop take notice of Fab in the first place; “You gonna make put ya in a headline/And your girl gonna help me come up with a head line/The suck game while I’m driving is a fool/She know it’s head first like she diving in a pool/Right stroke, left stroke was the best stroke/Bitch blow whistle like she got a ref’s throat/Foul, and I’m so flagrant” Fall back.

Download: Sa-Ra feat. Ty (of Ty & Kory) – “And If”
Album: The Hollywood Recordings [2007]
If you like me, your “Get Busy In The Bedroom” playlist on your iPod is probably devoid of any Hip-Hop. Do you really want to explain to your girl why you were trying you get it poppin’ to Plies’ “Plenty Money”? One of those instances where rhymes and sexy time mix well is Sa-Ra’s “And If” featuring Ty. It sounds like something PM Dawn would have made had their heyday been in 2007. The smoothness of this track is crazy…and it is a fixture on my “Lay It Down” playlist. What? Too much info?

Download: G-Unit – “Bang Bang”
Mixtape: Automatic Gunfire (G-Unit Part 4) [2002]
I know 50 just got a release date set for his next album Before I Self Destruct (Nov. 23rd), but I’d be lying if I said I was “highly anticipating” it. It wasn’t always like this though. Case in point, in 2002, 50 Cent (with Lloyd Banks & Tony Yayo) released one of my favorite G-Unit songs of all time; “Bang Bang”. From Curtis’ calling Irv Gotta a “fat cupcake eating motherfucker” in the intro to him calling Ja Rule a “Stuart Little looking motherfucker” in the outro, this track goes hard all the way through. And what’s crazy, it’s not really a diss song aimed at Murder Inc. It does show just how well the charter members of G-Unit flowed together; 50 Cent: “Bang bang from big heaters/Hundred dollar sneakers/Two seaters, two meters”/Lloyd Banks: “And a bundle of haze/At least enough to last fourteen days/Eat where they sell lobster/My eyes slanted like Pharrell’s partner”/Tony Yayo: “Nigga respect me like you father when it come to drama/I put the lima to you momma and beat her like a piñata”