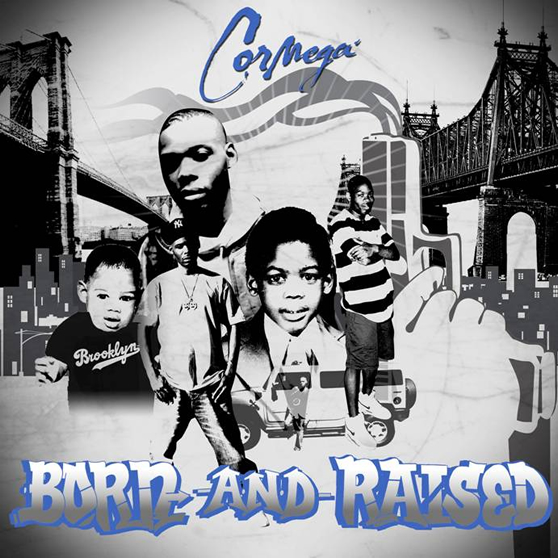 It’s been awhile since Cormega has dropped a solo record. You can say this is his third official studio record. Who Am I? is a soundtrack album; The Testament was a shelved by Def Jam which was suppose to release around 1996; And Legal Hustle was a compilation album for his record company. Now the Queensbridge native has finally returned with Born And Raised. Unlike his previous albums, Mega comes through with an excellent production lineup which includes: DJ Premier, Pete Rock, Large Professor, Easy Mo Bee, and many other superb Hip-Hop producers. Matter of fact, EVERY SINGLE TRACK is produced by a Hip-Hop prodigy. It doesn’t stop there. The album also features many legendary guest appearances, such as KRS-One, Big Daddy Kane, Tragedy Khadafi and more.

Believe it or not, this is one of my most anticipated releases for 2009. Cormega has always been a highly underrated emcee. The Realness and The True Meaning are two of my favorite albums. These two records are superior because they showcase Mega’s lyrical abilities and his great flow. I hope this album does the same.

1. Prelude/Intro (The 3rd Coming)
Featuring Marley Marl; Produced by Khrysis, Cormega, & Bear One
The legendary Marley Marl starts off the album with a few words about Cormega’s street credibility. Is it just me or are there a lot of ’09 albums that start similar to this? After the prelude, the record officially starts with the “Intro (The 3rd Coming)”. Mega takes no time to point out the struggles he’s gone through growing up in Queens. This is a nice way to start the album.

2. Girl
Produced by L.E.S. & Cormega
I wasn’t really feeling this song after a couple listens. I felt that Cormega could’ve come harder with the flow (no homo). However, now I see why his delivery was calm. This helps shape the mood of the song. Take some time to listen to the lyrics, and I promise it will grow on you too. It’s a great metaphoric song about the dangers of cocaine. One of my favorite lines from the track, “She burned Richard Pryor when he piped her raw”.

3. Love Your Family
Featuring & Produced by Havoc
This is a song that explains why blood is thicker than water. Cormega starts off speaking on his daughter, and clarifies all the love he has for her. Havoc grabs the mic and touches on his love for his mother, sister, and grandmother. Then, Mega goes into the deepest part of the song when he tells us how good of a mother he had. For those of you who don’t know, Cormega witnessed his mother’s murder at four years old. Although, I’m not sure if that verse was intended for his mother or stepmother. The chorus sums up the theme of the song. It’s not as heartwarming as you may think.

4. Get It In
Featuring Lil’ Fame; Poduced by Easy Mo Bee
Easy Mo Bee drops a nice up-tempo beat that fits the energy of Lil’ Fame and Cormega on “Get It In”. Lil’
Fame makes the track sound like it should be on a M.O.P. album. He also takes a shot at Kanye West, “I’m so far beyond these hoes, with flows tighter than Kanye’s clothes”. However, Cormega outshines Fame as he comes with that nice flow and lyrics that bring you back to ’01.

5. The Other Side
Produced by Fizzy Womack & Cormega
Fizzy Womack (Lil’ Fame) returns this time with a jazzy beat. It’s a surprise to hear Fame come with a beat this laid back, but it don’t matter as long as it works. This track displays the ups and downs in life. However, this song seems out of place after the hard hittin’ “Get It In”.

6. Live And Learn
Produced by Pete Rock
Pete Rock and Cormega team up for “Live And Learn”. I thought this would be a definite standout on the album, but I felt they could have both done better. The beat isn’t bad, but sounds a little plain. Mega drops some words of wisdom on how to live for the future, not the past. Once again, still a good song, but should’ve been better.

7. Make It Clear
Produced by DJ Premier
This track is ridiculous. DJ Premier created the perfect beat for Mega’s style. Perfect samples and scratches (as always). Plus, the hard felt lyrics do not disappoint. I wish more songs were similar to this. This flow is untouchable. Too many quotables to insert here.

8. Journey
Produced by Large Professor
First, DJ Premier, now, Large Professor. This is another faultless beat by one of Hip-Hop’s finest. Cormega speaks on how life has been a journey for him. In this song he also shows great appreciation to New York (he shouts out AZ’s Doe Or Die and Big Pun in the video), and how it made him who he is today. “Hip hop never died, it’s just sick of the drama”. Here is a link for the video.

9. Define Yourself
Featuring Tragedy Khadafi & Havoc; Produced by DR Period
Tragedy Khadafi and Havoc join Cormega for “Define Youself”. This is yet another track about life and how it identifies you. I would rank Cormega as the best emcee on this; followed by Tragedy and Havoc last. This track is not bad, but I felt it was too short for two guest appearances.

10. What Did I Do
Produced by Nottz
I’m feelin’ the sample Nottz used for this beat, but he could’ve done better with the drum loop. Another mishap about the track is how short it is (2:54). Cormega speaks on certain people and how they are abusing themselves. I wouldn’t consider this filler, but I felt Mega could have done better with his lyrics and flow.

11. Dirty Game
Produced by DJ Premier
The album finally picks up again on Premier’s “Dirty Game”. This is one of the best songs that explain the struggles of being born and raised in Queensbridge. His lyrics about the hip hop game and prison let us know why he is considered a street poet. This along with “Make It Clear” and “Journey” are my top three standouts on the album. They bring you that 90’s New York hip hop mentality.

12. One Purpose
Mega drops a short, but nice accapella. This is nice, but I feel that it belongs on a mixtape, not an album.

13. Rapture
Produced by Ayatollah
Where have I heard this beat before? (edit: Willie Hutch – “Mama’s Theme”, Cam’ron – “D Rugs”, Lupe Fiasco – “Coulda Been”, emc – “U Let Me Grow”) It’s all good if he took this sample from somebody, because we all know that his sample for Cormega’s “Rap’s A Hustle” has been jacked plenty of times. I also like how Ayatollah throws a sample of Big L at the end of the verses. This track also shows how good of a lyricist Cormega actually is.

14. Mega Fresh X
Featuring DJ Red Alert, PMD, Grand Puba, KRS-One, & Big Daddy Kane; Produced by Buckwild
This song was leaked over a year ago titled “Fresh”. The only difference here is the producers. Emile produced the first song, and Buckwild remixed it for the album. My favorite thing about this song is that there is no chorus. Just a lyrical ambush by some of hip hop’s legends. On a side note, Big Daddy Kane murders this track.

Bottom Line:
This is definitely an album that takes a little time. Many people won’t have the patience, but the more you play it, the more it will grow on you. However, I do feel that Cormega could have done better with his delivery. Yes, his lyrics are nicely done, but delivery is the next important thing for an emcee. The other issue I have with the album is how short it is. It only has fourteen tracks (one being a short accapella), and only two of those are over four minutes long. On a production note, this was a pretty good album. Although, I felt this album should have been better by the list of producers. Nevertheless, it’s still a good album, and should be copped if you’re a fan of New York hip hop.