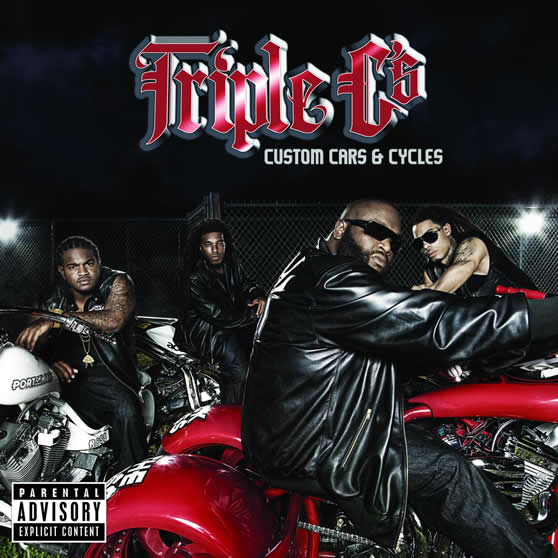 Rick Ross is the latest rapper to try his hand at being an executive with the release of his group Triple C’s debut album Custom Cars & Cycles. The group consists of Ross, Gunplay, Torch, and Young Breed. Don’t think that these were some rappers that just got put on; they have been down with Ross from the beginning. Now it’s their turn to bring the country deeper into Miami, past South Beach, past all the beaches, and straight to Carol City. Ross has been on a roll this year, now he has to show that he really is a Boss and can manage a team. Let’s check it out.

Custom Cars & Clips
Produced by Schife & OhZee
The album starts off with Ricky GOING IN over some nice production. Say what you want to about Ross, but the dude has that IT factor about him. The rest of the group made a good impression on me on the first song. There wasn’t any doubt that Ross & Co. wasn’t going to come out the gate stumbling.

White Sand
Produced by DJ Speedy
The chopped beat has me OPEN over here! Of course Ross starts it off to set the tone, the group follows him up. When Ross is out the song, it seems like they are doing their best NOT to lose the lead. The production is so tight on this one; I think that made up for the average lyrics from the squad.

Break It Down
Featuring Bun B; Produced by Best Kept Secret & Nasty Kutt
Once again the crew gets dealt some nice production and they put in some nice work on the song. Of course the stand out verses belonged to Ross and Bun. Ross is doing a good job carrying the team so far.

Go
Featuring Birdman; Produced by Schife & OhZee
Four songs in a row with nice production is making this album very listenable. Ross again sets the tone for the song, I can’t complain, it has been working, STICK WITH IT. This is the first single from the album and this isn’t a bad one to come out the gate with.

We Getting’ It
Produced by Schife & OhZee
All of the momentum of the album came to a standstill on this track. This song didn’t fit in with the flow of the first four songs. The hook on the song is a problem, the production could have been better, and since the production wasn’t that good, some flaws got exposed with the group. Ross couldn’t save this one.

Trick’n Off
Featuring Gucci Mane; Produced by Drumma Boy
The album swings back on track with an appearance of one of the hottest dudes in the street…GUCCI! You can tell Ross dumbed his lyrics down for Gucci. Triple C’s sound more comfortable rapping on these topics. HOT SONG.

Throw It In The Sky
Produced by The Olympicks
Ross sets the tone again on the track over some pretty good production provided by The Olympicks. This would do some good spins in the club because of the hook and the topic. I like the feel of this one.

Erryday
Featuring Young Jeezy & JW; Produced by Schife & OhZee
Schife and OhZee bounce back after their first slip up to release a BANGER. When Triple C’s get good production, it disguises the fact that they might not be the best MC’s out there, but they do better when they stay in their lane.

Customized
Produced by Schife & OhZee
This is one of those songs that sound so FLORIDA that it’s screaming on the production. I’m on the fence with this song. Half of me likes it, and half of me hates it. The song just doesn’t do enough to win me over.

Gangster Shit
Featuring Game; Produced by Rich Harrison
Game lends a hand on this track and he does what he usually does, but this time he went first and Ross batted clean up on this track. The production does sound like some gangster shit. This song has some good moments, but it’s obvious that this is a one man team.

Finer Things
Featuring Masspike Miles; Produced by The Olympicks
This sounds like your typical Ross track, only problem is that everyone isn’t on Ross’ level. The crew took the Boss’s lead and did enough to keep the listener entertained after Ricky’s verse. The Olympicks did their best J.U.S.T.I.C.E League cover on the production. No diss just noticed.

Chick’n Talk’n
Featuring Mack 10 & Warren G; Produced by The Olympicks & The Dream Team
Don’t adjust your eyes, yes Mack 10 and Warren G are still rapping. This song reminded me why I never listened to Mack…I hate his delivery. What were they thinking with this collab? FAIL.

Diamonds & Maybach Pt. 2
Featuring Suede Royale; Produced by Bink!
Ross is always good for a nice smooth one for you to ride clean to. I can’t even get mad at Ross on this one. Yeah, it’s long (PAUSE), but it’s so smooth that you have to let it ride out. I really like the hook on this one. HOT.

Hustla
Featuring Masspike Miles; Produced by DJ Khalil
They change up and let Gunplay open up on this one and to my surprise he sets it off for the crew. Is this Lloyd on the hook? Sure does sound like him. The production on this one is pretty good, and the Cartel did some good work on this one.

Yams Pt. 2
Featuring Yo Gotti; Produced by Drumma Boy & Zaytoven
“Grandma Kitchen/cooking yams/same pot/she use for the yams”. I guess you know where this one is going. Yo Gotti has become one of the more popular dudes in the streets. If you like dope boy lyrics, this will be one that you jam EVERYDAY. If you are tired of the drug rap…skip this one. I like drug rap when it is executed well, and they did just that on this one.

Bottom Line:
Ross and Triple C’s had a respectable debut album. It was evident that Ross had to be on every track and on most of those tracks, he carried them. Not like his shoulders were not strong enough to do it, but he did get help from the supporting cast, had some nice features, and got a big help from the production. The album will not push a ton of units because it is still being marketed towards the streets. We all know the “streets” don’t buy albums, and as long as that is your targeted audience…you will not do numbers.