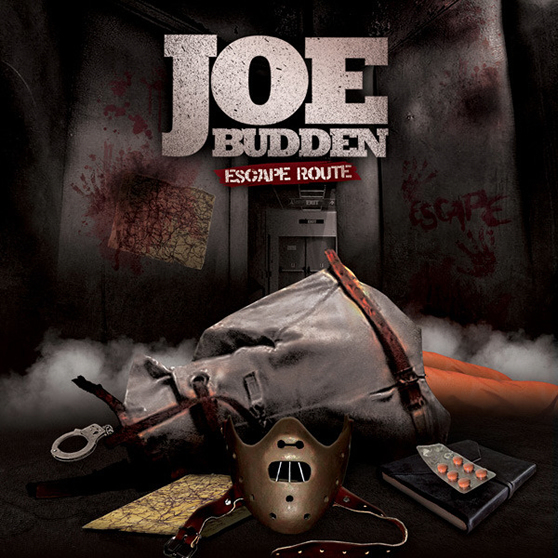 With the Fro’s crew busy with new projects constantly coming up, I thought it might be fit for a member to step in and provide some support and relieve some of the workload that has built up over the past months and also to PROPERLY review the albums considering I had a feeling they were going to get a FFWD. With this said I bring you 3 reviews. So as the year comes to an end, what can we really gather from this year? Although 2009 has had its flops and bangers, it’s also had its shining moments as lyrical and creative albums begin to get exposure. Slaughterhouse has been greatly involved with this movement (Possibly the year of the Slaughter?). But among this each member has also released their solo projects. So please enjoy as I bring you ¾ of the Slaughter as I review Street Hop, Escape Route & Mr. Pig Face Weapon Waist. First up: Joe Budden’s Escape Route

Escape Route (Intro)
Produced by The Worxxx
DAMN! Joey starts off Escape Route HARD! Joey came correct with the lyrics and the beat produced by Worxxx is ridiculous. The fact that he sampled that little part made the song sound pretty epic. Perfect start to an EP.

Anti
Produced By Young McFly
Damn. These beats keep coming. Joe has always been criticized for not having an ear when it came to picking beats but so far he is 2/2 with some nice beats. The beat is dramatic enough to give Joey the space he needs to go in lyrically. Joe is one of the biggest underrated MC’s in the game.

DAMN! Check for this song!

Never Again
Produced by Jared F.
Joey talks some real shit on this track. The beat sounds like its on some reflecting shit and Joey gives you that “Mood Muzik” style that all Joe Budden fans know. Course you’ll have to listen to this one to get a feel for it yourself. Mood Muzik isn’t for everyone.

World Keeps Spinnin’
Produced By (Not Given)
Joey keeps the deep Mood Muzik going with “World Keeps Spinnin’”. Joe picked very complex beats where emotion has to be present within the music itself even without the lyrics. This allows the room Joe needs to deliver his emotion filled verses. Not bad song

Forgive Me
Produced By Jared F.
Just like the previous two songs, Joe continues with picking an emotional filled beat. This time however he starts the song off with a voice snippet that he recorded regarding one of his beefs (can’t remember which one) on a YouTube video. Regardless by now I am getting kind of bored with the beat selection. The lyrics are there, no doubt about that.

State Of You
Produced By Jared F.
The Mood Muzik CONTINUES except this time Joe picks a MUCH better beat that holds your attention (Compared to “Forgive Me”). Joe is obviously in his comfort zone when he is dealing with tracks like this. Course I can’t blame him. He is staying true to who he is. Nice track. Check it!

Good Enough
Produced By Jared F.
Right when the track begins you hear the pianos and an escalading beat. I think it’s me but I just can’t get into this song. The last 4 tracks before this have followed the general tone of the album. Don’t get me wrong, Joey is making great music but a “break” needs to be inserted between the last couple tracks to change the pace up and give the listener some diversity.

No Comment
Produced by J. Cardim
Here is that break I was talking about. We have a much more sped up track produced by J. Cardim. The song suffers from the hook Joe came up with, however he addresses the situations and the way he’ll answer when asked about something that may put him into some controversial issues (For example “Hey Joe Budden what do you think of {insert rapper name}”) due to him putting himself out there via Twitter, BlogTV, etc.

We Outta Here
Featuring Slaughterhouse; Produced By Streetrunner
And here is that group cut you expect on the album. This shit is a straight BANGER and it bangs hard in the whip…trust me. Like in Street Hop Royce is back on that Auto-Tune for the chorus and to no surprise he pulls it off adding to the song. Nickel starts off the song hard

Poppa-Poppa Pistol stuck his dick in Momma Missile
And created Mr. Got-to-Get-You if he opposite just split
You niggaz bitches cranberry like a vodka mixer
Whippin bitches niggaz black, ass like a cotton picker
Bomb through debris – I’m holdin two pistols
In the form of a crosshair, I am armed to the T
I put on for my city, I take off for whoever
Think I’m soft for my job of rappin, go back to clappin
Back to illin, back to dealin, back to coc-a-ina
Up the nose, that’s the feelin, sky the limit, that’s the ceilin
And the women is the whores, puttin numbers up for sales
It’s the score into hell, it’s the feel, it’s the feel

The decision to start off Joey’s verse chopped and screwed was a genius idea, however later on in the verse its obvious that Joe struggles with the flow of the track although delivering a good verse. Crooked I follows suit by delivering a verse that we know he can deliver after listening to “Slaughterhouse” and “Gun Harmonizing”. Joell’s verse however holds the song back as his flow is sped up incredibly to the point where it may be difficult to hear what he is saying .Regardless. This song and the beat go HARD! Check this one!!!

Clothes On A Mannequin
Produced By J. Cardim
J. Cardim has delivered great beats for Joey throughout the album and it doesn’t stop here. Joe gets back to the Mood Muzik and does a great job keeping your attention through most of it.

Freight Train
Produced By Jared F.
We are back to the Jared F. produced tracks. This one on the other hand keeps your attention unlike a few of his previous beats. Course this song couldn’t be reviewed right if I didn’t say for like the 20th time that the Mood Muzik must march on. This song should maintain your attention for most of the time before you click that next.

Connect 4
Featuring Young Chris; Produced By Chad West
Aight I’ll be honest, I have NO idea who Young Chris is. But he delivers a so-so verse, then Joey steps in and just lays the track to rest as he usually would. This surprisingly is the shortest song of the album and the last. The beat is different from the Mood Muzik esc type beats we’ve been drowned with and its nice to hear a change.

Bottom Line:
Its very obvious that Joe Budden makes very great music and he has a very loyal fan base that enjoys the “Mood Muzik” style that he is known for, however the production and the placement of tracks hold the EP back from being a stand out album. The lyrical content was there but same sounding beats doesn’t help to maintain the listeners attention.