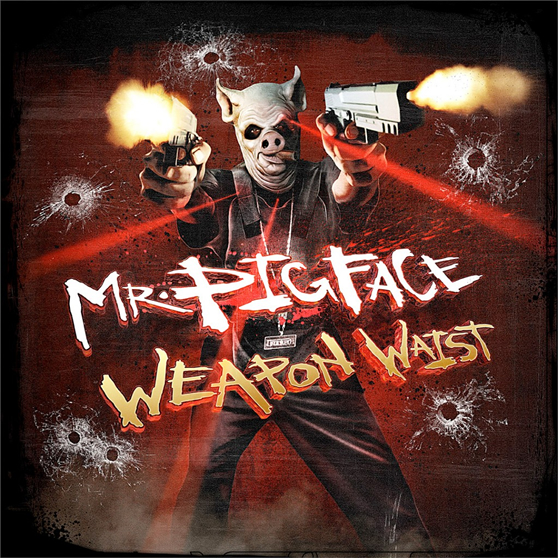 With the Fro’s crew busy with new projects constantly coming up, I thought it might be fit for a member to step in and provide some support and relieve some of the workload that has built up over the past months and also to PROPERLY review the albums considering I had a feeling they were going to get a FFWD. With this said I bring you 3 reviews. So as the year comes to an end, what can we really gather from this year? Although 2009 has had its flops and bangers, it’s also had its shining moments as lyrical and creative albums begin to get exposure. Slaughterhouse has been greatly involved with this movement (Possibly the year of the Slaughter?). But among this each member has also released their solo projects. So please enjoy as I bring you ¾ of the Slaughter as I review Street Hop, Escape Route & Mr. Pig Face Weapon Waist. First up was Joe Budden’s Escape Route. Now here is Crooked I’s Mr. Pig Face Weapon Waist.

The Skitzo (Intro)
Produced By Cosmos
Your intro as Crooked I talks about “Mr. Pig Face Weapon Waist”…the character. Course I know many of us wonder where he came up with this name and Crooked I gives you a little insight.

Mr. Pigface
Produced By 21
This beat is a very interesting as the beat is escalating and then loops around to the beginning. Not bad. Crooked goes into his gangsta shit as he keeps the Pigface mentality. No hooks on this one, just straight aggressive lyrical verses coming at you. It’s a decent track.

U Shoulda Made A Phone Call
Featuring Kay Young; Produced By Frequency
Now this is on some West Coast shit! I’m surprised with Frequency on this one as you never thought that Freq could deliver a beat like this. BANGER!! You either love Kay Young or hate him. In this one you have to love him (no homo) as he delivers a catchy and great hook. Crooked I keeps it simple and delivers that gangsta shit that is well known in the West Coast. Check for this one.

One More Time
Produced By P. Silva
This song also has some West Coast feel too. Crooked I does his thing on the verses but the hook is suspect. Maybe this would have been a perfect time for a Nate Dogg feature on the hook. Regardless, the verses are there and the beat is decent.

Freestyle Cypher
Featuring Horse Shoe G.A.N.G. & Royce Da 5’9”; Produced By Komplex
Crooked I speaks some truth in the beginning of the track. He then proceeds to introduce Horse Shoe G.A.N.G.. They may be young, but I’ve got a feeling Horse Shoe ain’t nothing to fuck with at all. They deliver some lyrical content that most rappers now days could not. Royce then steps in and ends up slaughtering the track. The beat produced by Komplex is simple enough and good that it forces you to listen to the lyrics of the track. Pretty dope.

Woodstock Hood Hop
Featuring Slaughterhouse & M.O.P.; Produced By Nottz
This song has been out for a while but this is what we all want. Nottz give you a high energy beat as the members of the Slaughter come in to pick it apart. Joell and Joey steal the show with their verses though

[Joell Ortiz]
H-e- (what?) l-l-o, i’m one hell of a show
I’m the best, you stuck in the middle like l-m-n-o
I’ll piss on you, let every toxic elements go
All you pussies is fucked, call me now celibate Joe (ay!)
Ay Slaughterhouse, let’s go rock Ed Sullivan Show
I literally can’t front, I’m back like never befo’ (oh!)
I’ma rap my letter to hoes
Dear prostitute, I miss y’all lettin’ me slap my head on your nose
Where the fuck is my guitar? It couldn’t of went far
Oh yeah, I smashed it on homie head in that Brook-lyn bar
Man I’m somewhere in between a crook and a star
Had some more bars but i left my rap book in the car (yo yo yo yo yo)

[Joe Budden]
Look, I’m not a gang-banger, more like game changer
With tamed anger, alias lover name changer
Liable to pop at kids and aim flamers
I’m why your parents told you not to entertain strangers
Dope get it, top notch, flow sickest
Best out, don’t blame me it’s no spitters
So vicious on the road to riches
From now on call me Mr. weiss, they chasin all of your old bitches
From the hood new jersey and I claim this
Oxymoron, rob with the dirty and stainless
Cock back, high saddity so I keep the top back
So when the streets is watchin, I could watch back

Bottom Line:
The effort by Crooked I on his EP just didn’t add up to what we know of him from his features and verses on Slaughterhouses debut album. It seemed as if Crooked wasn’t even putting any effort into the songs at some instances during the album. But lets not forget this is an EP and we expect a lot more out of Crooked in any future album or Slaughterhouse projects.