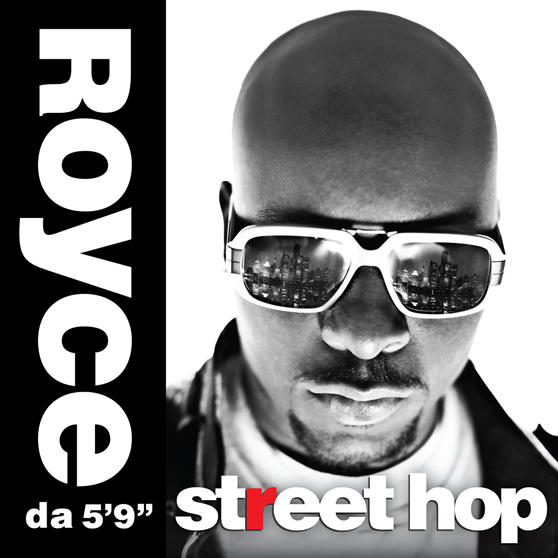 With the Fro’s crew busy with new projects constantly coming up, I thought it might be fit for a member to step in and provide some support and relieve some of the workload that has built up over the past months and also to PROPERLY review the albums considering I had a feeling they were going to get a FFWD. With this said I bring you 3 reviews. So as the year comes to an end, what can we really gather from this year? Although 2009 has had its flops and bangers, it’s also had its shining moments as lyrical and creative albums begin to get exposure. Slaughterhouse has been greatly involved with this movement (Possibly the year of the Slaughter?). But among this each member has also released their solo projects. So please enjoy as I bring you ¾ of the Slaughter as I review Street Hop, Escape Route & Mr. Pig Face Weapon Waist. First up was Joe Budden’s Escape Route. Second was Crooked I’s Mr. Pig Face Weapon Waist. And lastly, here’s the highly asked for review of Royce 5’9″‘s Street Hop.

Gun Harmonizing
Featuring Crooked I; Produced by Emile
This track originally appeared on Royce’s The Revival EP, but Royce has included fellow Slaughterhouse member Crooked I to add to the track. This beat is great for allowing Royce and Crooked to flex their lyrical muscle (pause) as Royce “Gun Harmonizes” for the hook. Royce goes in on the beat but Crooked I steals the show

I split your wig from far away like a long arm barber
Then lift your weight like a strong arm robber
Put that on Moses, I rely on my ride
As sure as Satan’s tongue lyin to God, everybody dyin
It’s like you standin in a circular firing squad
Singers for hire I find him a job
You see the gauge baritone, the revolver’s a tenor
Way the shots spin your body I’ma call ’em “The Spinners”
Call ’em “Earth, Wind & Fire”, put you beneath the earth, wind and fire
Feel the fire that burnt Richard Pryor

Count For Nothing
Produced By Nottz
Right from the beginning any Hip-Hop head should know that Nottz sampled Biggie’s “10 Crack Commandments”. Like the previous track this one was also taken from The Revival EP. I’ll be honest, at first listen I didn’t really enjoy the song, but months later I can’t believe I didn’t like the track. Royce adapts to the production greatly as he cleverly uses the sample, goes in and even plots to take out his own group. Great song.

Soldier
Featuring Kid Vishis; Produced By Frequency
Alright I don’t know about ya’ll but I’m not feeling the hook AT ALL. Frequency does however do a decent job on the beat as Royce does his thing, however Kid Vishis just doesn’t stay up to Royce’s level but delivers a decent verse. Its alright.

Something 2 Ride 2
Featuring Phonte; Produced By DJ Premier
The 2nd single of the album is what we’ve all wanted, Royce over a Premier beat. The beat is as the title puts “Something 2 Ride 2” as it sets the mood of the song as a “flashback” state of mind. My one complaint about the song is although the beat produced by Premo was a great one, it just doesn’t have that DJ Premier kind of “feel” to it. Regardless, this is an above average record.

Dinner Time
Featuring Busta Rhymes; Produced By Quincey Tones
I can see why Royce picked Busta for the feature as the beat would be hard to flow over for most normal rappers. But my complaint with Busta on this one is that Royce practically shits on him as he murders Busta on the track. Also the track suffers from not having a hook as Busta talks through the song between verses. The cut had potential to only be pulled down by Busta’s annoying talking and below average lyrics to a solid track.

Far Away
Produced By Emile
At first I thought this track was set up for disaster with Royce doing a love song, that not being the complete case. Royce is assisted on the chorus by the infamously hated Auto-Tune, surprisingly Royce pulls off the tool unlike many rappers. This song was actually an enjoyable listen as its pretty catchy and the beat is pretty smooth

The Warriors
Featuring Slaughterhouse; Produced By Streetrunner
UH-OH! Voltron unites to murder a track. The beat produced by Streetrunner proves to be simple but is great in giving the Super Friends the ability to go in lyrically. As most Slaughterhouse tracks, the song is full of quotables as each member provides great verses but Joell Ortiz steals the show with his second verse

Anyone who feel they could see me is in dire need of a eye exam
My mind expands wider than the fanbase of a fire band
And what I release from my diaphragm
sticks to you, like the wrists of Spiderman
Fool a average listeners what you liars
can do but you will die a scam
When I die they will retire my entire hand
for years of scripted whoop-ass, makin intruders try a can
I guess the moral of the story is Joell’s victorious
And e’rything’s all gravy like Notorious

…A Brief Intermission (Skit)
Produced By David Cross
Its just a skit….SKIP

New Money
Produced By Streetrunner
Listening to the first 10 seconds of this song I could have sworn we had a classic on our hands. But as soon as the beat actually starts my dreams come shattering like a falling star. Royce does his usual stuff but the hook on this is just HORRIBLE….I’m tempted to give you a SKIP on this one.

Shake This
Produced By Premier
Here is that Premo sound I was asking for the first time around. Premo delivers that NY sound that we all know him for. Royce bounces back greatly from “New Money” and delivers a solid track. Check it out!

Gangsta
Featuring Trick Trick; Produced By Raf Moses
Damn, we got another solid track on our hands. I didn’t expect much from this track when I first saw that it featured Trick Trick but Royce keeps Trick to a minimum by just having him talk over the beginning and end of the track, but Royce keeps it gangster. The beat is pretty smooth and the whole Gangsta throughout the song is a pretty nice touch. Another great song

Mine In Thiz
Featuring & Produced by Mr. Porter
This song is a little on the fence. The hook is horrible but the beat sounds like something I would have heard Missy or Busta go over in a way. Not liking Royce’s flow on this one. Average song at best to some of you

Street Hop 2010
Produced By Nottz
Here is the final track that was on The Revival EP. Never really enjoyed the way the song started off but Nottz has his idea in mind as the beat actually kicks in. The beat is very slow paced giving Royce plenty of room to rhyme over. I think it’s me but I think I hear some elements of the song from “Woodstock Hood Hop”. Did I mention this song is very slow paced?

Thing For Your Girlfriend
Featuring Kay Young: Produced by Mr. Porter
At first I thought this whole thing was a skit. But then Kay Young comes in with a pretty smooth beat produced by Mr. Porter. The relationship with Kay Young with fans is either you love him or hate him. I personally don’t mind him on the hook. With this said Royce gives him a whole minute and a half to do an intro hook before he steps in with a verse. It’s a nice detour from all the gangsta going on. Nice song

On The Run
Produced By Emile
The track starts off with a little skit, the beat kicks in and its another smooth beat. Royce goes into his story telling flow. This track is very nice as Royce paints a picture with his words and we have a nice soulful hook (Although uncredited). For some reason when I listen to this song I am reminded of Eminem’s “Stan” for some reason (Not to the severity that “Stan” was but yeah). Another solid track.

Murder
Produced By Frequency
Damn. This beat is great. And what’s with all these smooth beats towards the end of Street Hop? Not that I’m complaining because they’ve all been pretty good. But damn…I’ll just let you guys listen to this song. Great track!

Bad Boy
Featuring Jungle Rock Jr; Produced By Streetrunner
So we go from murder to this….I feel if Royce kept Jungle Rock Jr. to the hook (That includes all the talking he does in the background of the song) and “Bad Boy” wouldn’t be repeating through most the song it would have been a decent song. That’s not the case though…the beat isn’t bad and Royce’s verses is what you expect from him. The track could have been A LOT better.

Part Of Me
Produced By Carlos Broady
The production is great but suffers from the same problem all the songs on the album suffer from. Great track as Royce is in his story mode flow. Check for this one.

Hood Love
Featuring Bun B & Joell Ortiz; Produced by DJ Premier
Royce hooks up with Joell and Bun B as they all deliver over a smooth Premo beat. Bun B in the last couple years has stayed consistent in delivering quality verses in all his features and this isn’t any exception. Joell ends off the song but doesn’t disappoint after following Bun B. The final track to a great album.

Bottom Line:
Nickel-Nine delivered a great album with Street Hop and the trend of great albums has continued to go through in 2009. I want to say Street Hop is a CLASSIC so bad and give the album a 5 Star rating, but realistically a couple songs hold the album down. Royce came out at the beginning swinging with some hard gangster shit, struggled a tiny bit in the middle and ended the album with smooth joints that did the job. One of the better albums that has been reviewed this year.

DJ LP Picks: The whole album is worth listening too. GO OUT THERE AND SUPPORT REAL HIP HOP