The Starting 5: The Group Edition 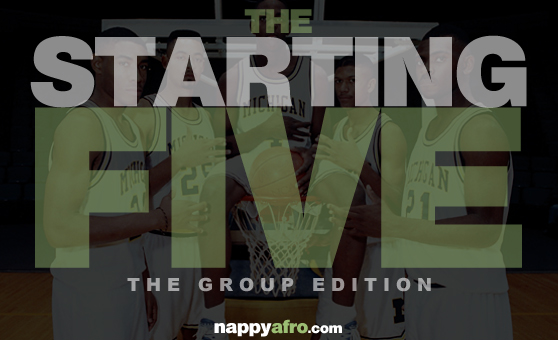 As we get closer and closer to March Madness, and I whimper to the reverberations of confirmation that Little Brother will put out there last album this year I thought this would be a good time not only to start this series of articles called The Starting 5, but to focus this first edition on Groups in Hip-Hop. The premise of the series is simple, who/what would be my starting 5 in a particular category. So come with me as I unveil my Starting 5: The Group Edition.

Point Guard: A Tribe Called Quest
The Point Guard (PG) job is to distribute the ball, call the plays, see the court, control the tempo and when needed to, score (of course, depends on the player.) The ideal PG is fast AND quick, makes good decisions, and can spread the floor with his quicks and range. This position is embodied in the music of A Tribe Called Quest. When you thought they were going to sound a certain way, they sounded different. When you thought they would do this, they did something different. Each album they came with made folks take a new notice of who they were while never compromising quality. With music that was clearly influenced by blue lights and smokey evenings, and lyrics that were the product of dedication and the long lost ability to construct a rhyme that even at bar 40 still has relation to bar 1 while not being so complex you had to pause and rewind just to “Check The Rhyme”, this group is one of the standards of group mastery not only in Hip-Hop, but in music. When you think about what other groups ATCQ has brought us or touched, this choice becomes even clearer. There were the Jungle Brothers and De La Soul which with ATCQ formed the Native Tongues. You also had classic work with Leaders Of The New School, Mos Def, Common, Queen Latifah, Monie Love, and Black Sheep. Nuff’ said.

Shooting Guard: N.W.A.
Typically, one of the best fusions of offensive skill on the court, the Shooting Guard (SG) is often asked to be the first scoring option for the team. They tend to have the ability to slash or hit the jumper, they have some handle and can pass well, and are generally the ideal look outside of the paint. With the primary goal being offense, I have to go with N.W.A. I wrote about them before in Classic Material but I’m not sure you understand. This group is probably the toughest group on record, period. I don’t mean that in any colorful, creative way nor is there any cryptic meaning behind that choice. Simply put, nobody has come harder or more direct than N.W.A. The way they played the game, they influenced the ENTIRE Hip-Hop culture and STILL have lasting impact well after the group has since disbanded and lost a core member in Eazy-E. Disagree, but lets check out a few rappers you may know that were influenced by or involved in this group shall we? Notorious B.I.G., Jay Z, Lil Wayne, Tupac, Snoop Dogg, Dr. Dre, Ice Cube, The Game, Eminem, and 50 Cent to name a few. How are they connected? Before N.W.A. Made gangster cool to mainstream America, this type of thuggery was only known locally. Gunplay and lyrics were dating before, but now they were married. Drugs and the dark life of the hood were myths before, but now they were fact. You can debate it all you want, but the idea of what it meant to be black and what it meant to love this Hip-Hop was not understood by the outsiders until N.W.A. With their best defense being offense and offensive, I’d have no other group shooting the rock….

Small Forward: Outkast
We can debate this one, but in my opinion, the Small Forward or Shooting Guard is the most important position on the court. The SF has to be able to not just shoot the J, but play with his back to the basket. He needs to be able to handle the rock inside as well as make the open pass. He needs to be offensively capable as well as be defensively minded. Let’s not forget they often have to be able to get the rebound as well as lead the break. This position is for someone who can do whatever you need done. Insert Outkast here. For my money, Outkast is the greatest group of all time. From the moment they touched the mic and blessed us with “Player’s Ball” from the classic album Southernplayalisticadillacmuzik, it was undeniable that we were in the era of Outkast. If you look forward from that album, they went on to give us what is largely regarded as 3 more classic albums. It’s hard to argue with over 25 million albums sold and 6 Grammy Awards. As many groups and artists do, they are responsible for putting their city on the map, Atlanta. The flip side is that they put an entire region (The Dirty South) on the map as well. I have all of their music and had to chop some stuff out to make it fit on one CD to play in the car. I had that CD in there so long, I had to press the eject button SEVERAL times to get it out. I don’t have anything negative to say about them or the music at all and for those of you that slept on Speakerboxxx, your loss.

Power Forward: Run DMC
One of the two largest players on the court traditionally, the Power Forward (PF) may have more responsibility to score or rebound depending on the team and player skill set. Someone like a Tim Duncan is the Point Guard of the big men where someone like Bosh is more of a Shooting Guard up top. Either way, they have to be able to pick up the pieces, occasionally score, but at all times contest anything around the paint. Run DMC (the first mainstream rap supergroup) is the Tim Duncan of Hip-Hop Groups. They are consistent, seemingly un-hyped in most “greatest” discussions, but easily have carried the genre further than any other group in the game (similar to how many players have won rings with Duncan at PF). They are the alpha of groups success in Hip-Hop and one of the cornerstones of the very culture we adore. With a group of firsts that would challenge even the most stubborn critic, there is no denying the greatness of this group.

Center: Public Enemy
The Center is usually the largest and strongest player on the team. They are often asked to score inside 5 feet of the hoop, control any rebound and defend any shot taken in the same area. Of course there are variations a’la Shaq and Yao Ming, but the thing all successful centers have in common, the ability to dominate. With a focus on defense and defensive rebounding, no group is more of an obvious choice than Public Enemy. I don’t think there has ever been a more militant or socially conscious visible group in Hip-Hop than PE. Their focus was clearly set on the struggle and strife of the voice of Hip-Hop in a world that had us on mute. They weren’t the gangsters of the West Coast, the flashy, braggart thugs of the East Coast, the different jazzy sound of the Couth, nor the pop funboys of the genre that some other groups were. They were The Voice of a people, the Voice of a culture. Public Enemy probably helped sell as many leather Africa medallions as Run DMC did Adidas and Kangol Kid did Kangols. Before PE, we had no one to spearhead the lyrical Black Panther movement and say what we wanted to say in the same arena we wanted to say it. The music of PE in the music industry (largely controlled by the same people that oppress the common folks) was the collective fuck you to the bosses that had the knees on their knees on our neck when we got to work at 9:01am even though they knew about the accident on the highway and that you took that route to get to work.

*there are two reasons WU is a sub and not a starter, 1) I don’t think they have near the accomplishments of any of the previous 5 mentioned, and 2) they weren’t as much as a they were a collection of artists…kinda like a label. That’s my opinion I guess, but I think RZA said something like this too.

Anyway, who are your starting 5?