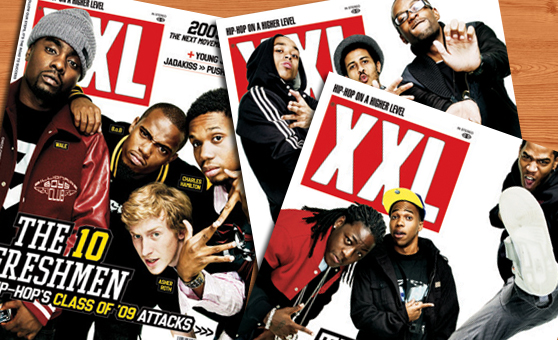 It’s been almost a year since we did the article on XXL’s “The 10 Freshmen”. The XXL magazine cover featuring their picks for “Hip-Hop’s Class Of ‘09” gave the new blood the much-needed light, caused widespread debates, and may have forever linked the careers of all the rappers involved. What have been the fates and progress of the “The 10 Freshmen” since then? Here, we look at the progress of each rapper, look at the album released, and give them a grade based on their success (As well as get King Jerm’s take). Class is in session….

Wale
Even though Wale already had a buzz in 2007 (That year he was featured on the cover of URB and released the mixtape 100 Miles & Running), the XXL cover helped elevate his game. While his debut album Attention: Deficit has been pushed back a few times and has yet to be released, Wale still made waves by having his first single feature Lady GaGa, releasing another good mixtape (Back To The Feature), signing/touring with Jay-Z, and being the official house band for the 2009 MTV VMA’s along side UCB.
Albums Then: 0
Albums Now: 0
Grade: B
*King Jerm Says: “Dude got some good exposure since he made the list..now all we need is the album.”

B.o.B.
Bobby Ray (As he goes by now) probably had the most artistic evolution on the list. His steady touring and mixtape releases steadily grew his fan base and made his reach beyond you standard Hip-Hop listeners. But rumor has it that the hold up on B.o.B.’s debut album, The Adventures of B.o.B., is due to label drama with Atlantic Records. Is this the reason for the name change and retirement talk? You can always download Should Have BeenThe First Album.
Albums Then: 0
Albums Now: 0
Grade: C
*King Jerm Says: “This cat retired (you need a career to do that) then he came out of retirement…I think he should have stayed retired.”

Asher Roth
Out of all the rappers on the list, I think a lot of people pegged Asher as the safest best as far as Hip-Hop stardom goes; He had a hit single (“I Love College”), he could rap, and of course, he was white. While Asleep In The Bread Aisle got mostly positive reviews and did marginally well selling around 60,000 and placing #5 on the charts, he got more noise for making a controversial nappy headed hoes joke during a Rutgers University event via Twitter.
Albums Then: 0
Albums Now: 1 = Asleep In The Bread Aisle
Grade: C
*King Jerm Says: “He WAS the Great White Hope until Eminem came back out…now Asher is nowhere to be found.”

Charles Hamilton
Poor Charles. After releasing mixtape after mixtape during 2008/2009, Hamilton hit a few bumps (Or huge potholes) in his career. Here’s just a few: He reportedly stole a beat from Black Spade, got punched in the face by his onetime girl on video, and he listed a deceased J-Dilla as executive producer on his (Now shelved) digital only The Perfect Life album (Whom he never met). This supposedly led to him being dropped by his label, Interscope Records. Other than a few leaked tracks here and there, Charles has been quiet on the Hip-Hop front.
Albums Then: 0
Albums Now: 2 = The Pink Lavalamp (Digital); The Perfect Life (Shelved)
Grade: F
*King Jerm Says: “This cat took more losses than Nas.”

Cory Gunz
Other than releaseing overlooked mixtapes, kicking freestyles, and contributing a verse to a scrapped version of “A Milli” for Lil’ Wayne’s Tha Carter 3 album, Cory is probably in the same position he was when he graced the XXL cover. It’s no question of his lyrical ability, but with no certified street bangers or official album in sight, you have to question his future a little. He did recently a mixtape hosted by DJ Drama, Heir To The Throne. That’s something right?
Albums Then: 0
Albums Now: 0
Grade: D
*King Jerm Says: “Who is this guy? Peter “Uptown Baby” Gunz son?”

Blu
When the XXL cover was shot, Blu was the only one who actually had a critically acclaimed album under his belt (Below The Heaven w/Exile). Since then, he has went unconventional and continued to put out joint albums (The Piece Talks & Johnson&Jonson). Still no word on the official full solo album but he seems content with his position in the game.
Albums Then: 1 = Below The Heavens w/Exile
Albums Now: 3 = The Piece Talks as C.R.A.C. Knuckles, w/ Ta’Raach & Johnson&Jonson as Johnson&Jonson, w/ Mainframe
Grade: C-
*King Jerm Says: “Who is this guy again?”

Mickey Factz
Even though he released the song “Incredible” to some buzz and was featured in a Honda commercial, the biggest thing Mickey may be known for this year is being by Joe Budden’s side when Joe got snuffed. Factz still makes music and released mixtapes since being named a “Freshman” but he is nowhere near making a impact higher than the XXL cover.
Albums Then: 0
Albums Now: 0
Grade: D
*King Jerm Says: “Is this the same guy from the Honda commercials? Hold up..he raps? Didn’t know that!”

Ace Hood
When Ace appeared on the XXL cover, Ace had the most going for him; he was signed and backed by Def Jam and DJ Khaled. Didn’t really matter. While he had notable rappers and producers featured on singles and his albums, both releases from Ace Hood, Gutta & Ruthless, didn’t garner the attention of a Def Jam album and are mostly considered fails. I don’t see a third try in his future. On the upside, he was featured along side Julez Santana, Jadakiss, & Fabolous in a BET Hip-Hop Cyper.
Albums Then: 1 = Gutta
Albums Now: 2 = Ruthless
Grade: D+
*King Jerm Says: “One of the few cats from the class that actually released an album. I can’t knock Ace’s hustle at all.”

Curren$y
After leaving Lil’ Wayne’s Young Money label, most rapper’s career would have majorly staled. Not Curren$y. He went the mixtape route a dropped eight mixtapes before going the digital route with Amalgam and releasing two albums. And even though each album hasn’t gained much attention as in sales, the Internet buzz on Spitta is high. He best days may be in front of him.
Albums Then: 0
Albums Now: 2 = This Is Not A Mixtape & The Jet Files
Grade: C+
*King Jerm Says: “He is always releasing something..too bad no one wants to hear it.”

Kid Cudi
Even though Cudi was placed last on the XXL cover, he did well for his self this year. Lead by his hit single “Day ‘n’ Nite”, Kid Cudi’s debut album Man On The Moon: The End Of Day went on to sell over 100,000 units in the first week placing #4 on the charts as well as receiving critical praise. He also got a guest spot on Jay-Z’s Blueprint 3 album and is rumored to have the lead role in the upcoming comedy series called How To Make It In America produced by Mark Wahlberg. It’s been a good year for Cudi and so far he’s head of this class.
Albums Then: 0
Albums Now: 1 = Man On The Moon: The End Of Day
Grade: B+
*King Jerm Says: “I wouldn’t know this guy if he was singing his song on stage with a Kid Cudi shirt on!…Wait..wasn’t he at the VMA’s?”