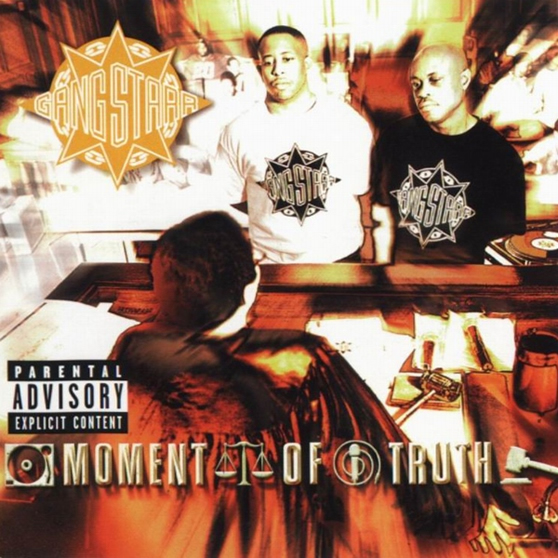 Guru a.k.a Keith Elam passed away last week (April 19th, 2010) from myeloma cancer. Guru was an inspiration to several rappers with his witty lyrics and fresh laid-back style. Some people underrate Guru as an emcee because of DJ Premier’s production status. DJ Premier joined Guru’s Gang Starr back in ’87 (after the other members left). To make a long story short, the duo went on to have a successful career. They release six albums, and you can’t say anything bad about any of them. Moment Of Truth is not the only classic record from Gang Starr. I also believe that Daily Operation is a classic, but I decided to review this album because I think this is Guru’s best lyrical performance. It’s too long to do a track by track review on this album with 20 songs (no skits); especially when most of them are standouts. So I’m going to review five of my favorite tracks from the album.

You Know My Steez
Produced by Gang Starr
Gang Starr hits us with a standout on the first track of the album. They begin with an intro explaining their formula, “The rhyme style is elevated, the style of beats is elevated, but it’s still Guru and Premier…” They kept this simple formula for most of their career and it only lead to success. What more can you ask for? – Real Hip-Hop with superior MCing and DJing track after track.

Guru has one of the smoothest flows in Hip-Hop. On the second verse, he explains the track to us, “the beat is sinister, Primo makes you relax, I’m like the minister, when I be lacin the wax. I be bringing salvation through the way I rap, and you know, and I know, I’m nice like that”. Fresh!

Above The Clouds
Featuring Inspectah Deck; Produced by Gang Starr
Premo starts the beat with a few famous quotes (mixed with scratching) related to what’s above the clouds. He samples a quote from former president JFK and drops the beat in perfectly halfway through his shortened speech. I believe this is one of the best intros into a song. Premo builds up the beat flawlessly, and Guru takes no time to drop a lyrical ambush on the track. “Illustrious feature, narrator you select, accompanied by Deck plus the DJ you respect. The seven and a half combine, over the frontline, the ten percenters, promotin slander in the airtime”. Guru is joined by Wu-Tang clansman Rebel INS on the second verse. INS takes the same lyrical approach as Guru and bodies the track, “I span the universe, and return to earth to claim my throne. The maker, owner, plus soul controller, Ayatollah rest in the sky, the cloud’s my sofa”.

I wish DJ Premier and Inspectah Deck could’ve made an album in this time (late 90’s). It seemed like they were both at the top of their games, and it’s hard to imagine that it would be anything less than classic material.

Sometimes you gotta dig deep, when problems come near
Don’t fear things get severe for everybody everywhere
Why do bad things happen, to good people?
Seems that life is just a constant war between good and evil
The situation that I’m facin, is mad amazin
To think such problems can arise from minor confrontations
Now I’m contemplatin in my bedroom pacin
Dark clouds over my head, my heart’s racin
Suicide? nah, I’m not a foolish guy
Don’t even feel like drinking, or even gettin high
Cause all that’s gonna do really, is accelerate
The anxieties that I wish I could alleviate
But wait, I’ve been through a whole lot of other shit, before
So I oughta be able, to withstand some more
But I’m sweatin though, my eyes are turnin red and yo
I’m ready to lose my mind but instead I use my mind
I put down the knife, and take the bullets out my nine
My only crime, was that I’m too damn kind
And now some scandalous motherfuckers wanna take what’s mine
But they can’t take the respect, that I’ve earned in my lifetime
And you know they’ll never stop the furious force of my rhymes
So like they say, every dog has it’s day
And like they say, God works in a mysterious way
So I pray, remembering the days of my youth
As I prepare to meet my moment of truth

The Militia
Featuring Big Shug & Freddie Foxx; Produced by Gang Starr
This is one of Gang Starr’s most notable singles. Big Shug starts the track, and quickly drops a hot line, “If heads only knew how I felt about the rap game, they’d relocate, and change their fuckin name”. Big Shug drops a few other hot bars, and then passes the mic to Guru. Guru doesn’t lose his step at anytime on the album, and these bars clearly shows it, “I meet life, head on, no holds barred, born with a heart of gold, now mostly cold and scarred. En guard, choose your weapon, or get to steppin, lyrical bullets make you dance from the trance you be kept in”. The highlight of the album comes from Bumpy Knuckles, “I’m in the control of my game, you must respect me like The Ref, Uh-huh, you disrespect (gun clicks) you get the tech. I turn you fake niggaz on and off, like I’m the clapper, I rob so many niggaz, they should call me Jack the Rapper”. Foxx murders the track in my opinion. This song alone helped him release his arguable classic album Industry Shakdown.

What I’m Here 4
Produced by Gang Starr
Premo drops a set of nice strings to begin this classic beat. Another thing I should mention about this album is the amount of samples Premo used (he sampled 39 songs). Some people don’t consider him a sample producer. However, he has used at least 20 samples for each Gang Starr for each album, and each record has that vintage Hip-Hop sound to it. The bottom line is that Premo is a superb all around producer. He is best known for his scratching, but seriously the man can do anything. That’s why I believe he’s the best Hip-Hop producer of all time. Guru lays down the finishing touch when he blesses the mic one more time.

The Bottom Line:
A five track review is not enough to explain how deep this album goes. “Royalty” is another standout that features R&B singers K-Ci & JoJo. If you didn’t think Premo could produce a Hip-Hop beat with two R&B singers, then you should give this track a listen. “JFK 2 LAX” displays Guru’s storytelling abilities about a time when he got caught with a piece. It’s a really interpersonal song were Guru speaks his mind about how he could’ve avoided the situation. Scarface joins Guru on one of the later tracks named “Betrayal”. This is probably my third favorite song off the album, but it didn’t seem to fit the review, so I’ll drop some words about it now. Both Guru and Scarface tell some deep, yet dark stories about a few people that got caught up in betrayal. It’s definitely worth a listen. There are about 5 other standout tracks that I’m not going to mention because I want everyone who doesn’t own it to pick it up, and for the people who own it to play it again. The bottom line is this record along with Step In The Arena, Daily Operation and Hard To Earn should be in every Hip-Hop head’s album collection.

Gang Starr will forever be one of the best duos in Hip-Hop. Peace.