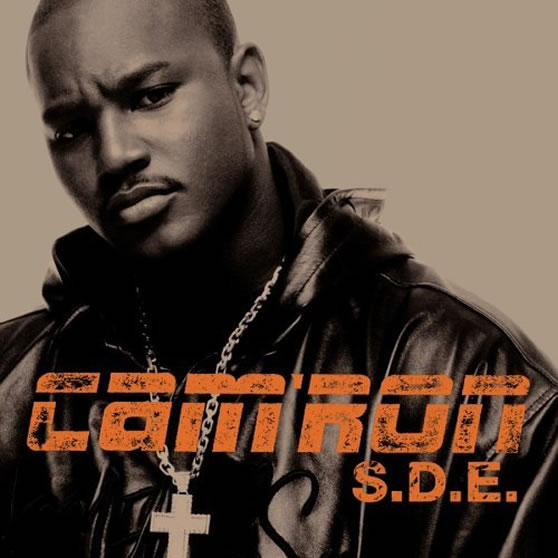 Cam’ron had a gold debut album, Confessions Of Fire. He had a platinum third album, the Rock-a-Fella debut, Come Home With Me. Both records were successful but his sophmore album S.D.E. (Sex, Drugs, & Entertainment) has been overlooked. After a few good listens this may be arguably Cam’s best effort lyrically.

The album is pretty well rounded consisting of street anthems, club bangers, and radio hits. Cam manages to do with ease what most artist seemingly struggle to pull off; putting out a album this complete and well rounded without sounding out of place.

This album isnt without good guests ranging from the late great ODB, Prodigy, Jim Jones, Noreaga, and Destiny’s Child.  Killa Cam definitely seems to adjust to the various styles as the guest list appears to offer. Cam displays a skill that seems to lack into todays artist; the ability to mix well with different styles.

Cam’ron did himself justice with this one and proved that he didnt need Ma$e to give the streets what they wanted. Here are some of my favorite cuts.

What Means The World To You
Featuring Keema; Produced by Armando Colon
Probably the most recognizable song from the album; the beat is a classic and the dexterity that Cam showed on this song. Beat was a sample from the classic Police song “Roxanne”. The hook was pretty dope as well catchy Cam picked a good one for single release and its one of the best of the album.

Losin’ Weight
Featuring Prodigy; Produced by Darrell “Digga” Branch
Cam’ron definity made a gem out of this one; straight street shit here. Camron & Prodigy simply killed this track. To me its probably the hottest track on the entire album. Beat was beautifully made and the lyrics were dope as well both artists did there thing on this joint.

The track was produced by Darrell “Digga” Branch (he did most of the cuts actaully) and he came through with probably the best he has done in his career.

Where I’m from
Featuring Dutch & Spade; Produced by Darrell “Digga” Branch
Members of the former group Major Figgas helped Cam out on this track. When it comes to some real gutter shit, this song is as gutter as you can ask for. This song can be described as the hardest song on the album and with no hook Cam destroys this Digga beat. Killa uses multies to perfection while maintaining the hard street motif that Dutch & Spade had set with the first 16 bars of the song.

“Cartridge blast, everybody smart in math/Loan Sharks with cash runnin from the narcs and tasks” – Camron

Bottom line:
This slept on album is a absolute classic. There are 19 tracks and mostly all of them are good to great. Only drawback here is that  one or two beats are sketchy but they are still listenable so dont skip and you will be satisfied.