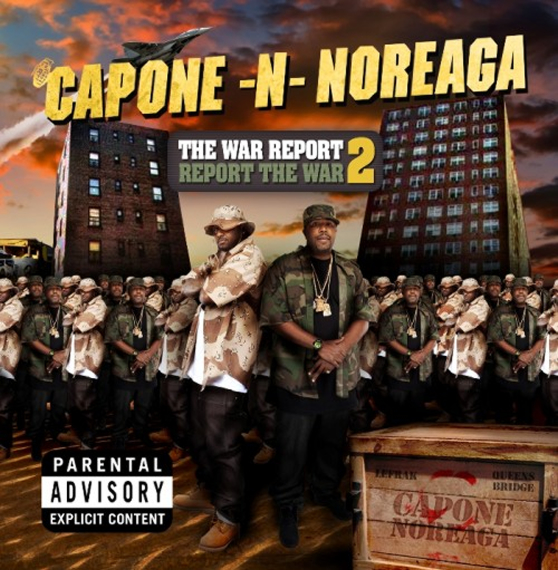 Capone-N-Noreaga return with the sequel to their debut album The War Report. This time around the record will be released on Raekwon’s Ice Water Records. Last year, CNN dropped their first album in nine years. However, Channel 10 was a disappointment to several fans who claimed that the duo took more of the commercial route and departed from their original grimey style. The duo hasn’t put out anything groundbreaking since their debut in 1997 and maybe that’s why they decided to release a sequel to one of their most celebrated albums similar to what Raekwon did last year… this means street lyrics, dark concepts, and hard hitting beats. If this album is anywhere close to Only Built 4 Cuban Linx Pt. II, then we might (and hope to) see more emcees coming out with this formula (GZA – Liquid Swords 2, AZ – Doe or Die 2, KRS-One – Return of the Boom Bap).

1. Pain
Produced by The Alchemist
The Alchemist starts the album with a haunting beat that Capone and Noreaga find easily to rhyme over. CNN couldn’t get any deeper on the first track. This gives listeners the vibe of what the record is going to sound like…grimey.

2. Bodega Stories
Featuring The Lox; Produced by Scram Jones
CNN are joined by The Lox on “Bodega Stories”. Scram Jones drops a hard hitting beat that let the five emcees share their hood tales. CNN gets sixteen bars each and the Lox gets eight bars each. All five come nice with their lyrics but I have to say that Capone comes out on top:

“This is etiquette I’m on my Beretta shit/Gave em the bread and split/I heard the 24 got the re-up/That’s all night store the hood Ikea/You can get it all from the baggies to the leaks/Ak said is a draught come and see em in a week/Fuck that this is my hood niggas gotta eat”.

3. Dutches vs. Phillies vs. Bamboo
Featuring Raekwon; Produced by Scram Jones
This one is for the blunt rollers. Executive producer The Chef connects with CNN on this joint (no pun intended). This song is fire. All three come with lyrics that are strictly nasty and Scram Jones drops a beat that is even better than the previous. My favorite track so far. By the way, I’ll take the Dutches!

4. My Attribute
Produced by Dreddy K. Amarae
The first average song comes four tracks in. The beat isn’t bad, just sounds a little plain compared to the other tracks. The thing I don’t like about the song is the over repetitive chorus. The terrible chorus overshadows Capone and Noreaga’s lyrics that are on point.

5. Favor For A Favor
Produced by B.T.
Producer B.T. has worked previously with Raekwon on Wu-Massacre and Only Built 4 Cuban Linx Pt. II. However, I believe this is his best beat yet. I along with Noreage have no idea what the girl is singing in the sample, but it sounds nice over some heavy drums. Both Capone and Noreaga take advantage of the beat and rip the track.

6. Hood Pride
Featuring Faith Evans; Produced by Neo Da Matrix
This is the first single to help promote the album. R&B singer Faith Evans joins the duo on another track about the hood. The song is listenable but seems to depart from the street concept. I felt they should’ve left Faith off this one.

7. The Reserves
Featuring Raekwon; Produced by Tha Bizness
Raekwon joins CNN once again, but this time he’s only on the hook. The beat provided by Tha Bizness is not bad but sounds out of place compared to the other beats. Decent track; both Capone and Noreaga come with the lyrics, but in the end it doesn’t stand out to me.

8. With Me
Featuring Nas; Produced by Buckwild
Three Queensbridge emcees spittin’ nothing but pure heat on this one. Noreaga drops the first verse and does his best to rip the track; “And I don’t care what the mayor say, it’s a recession/They puttin’ bricks on layaway/And sometimes I want to stay away/And change my jump shot back to a fade away”.Nas gets on the mic next, and shows us that he still has the street in his lyrics, “Yo if my niggas got drama, I murder for them/I get caught, I say your honor I murdered that man”. Capone gets on last, and does his best to keep up with Nore and Nas, “I got 5, you got 2 and a half though/We split everything down the middle like ash yo/If you don’t fuck with none of my niggas, then don’t speak to me/Frequently I like to buck shots like Evil Dee.” I can’t pick a clear winner on this.

9. Live On, Live Long Pt. II
Produced by SPK
This track is dedicated to the incarcerated Tragedy Khadafi (Part one was dedicated to Capone). He was locked up, and Tragedy & Nore had to finish the album without him. So it makes sense to dedicate this to the man who helped The War Report become as successful as it was. Rumors have it that Tragedy wrote the majority of the album. Nevertheless, CNN show mad love to their locked up brother. This is a definite standout.

10. The Oath
Featuring Raekwon & Busta Rhymes; Produced by Hazardis Soundz
“The Oath” is one of the best Hip-Hop songs of the year. Shallah Raekwon & Busta Rhymes guest feature on a perfectly produced song by Hazardis Soundz. The production samples help shape the concept where each emcee lays down their best material. I can’t pick a decisive winner on this one either, but I’m feelin’ Busta’s verse because I haven’t heard him spit anything like this in a minute.

11. Brother From Another
Produced by Kyze
This is a deep storytelling song about how Capone and Noreaga see themselves as brothers. Noreage gets on the mic first and lets us know how the duo met, and how they went through life with each other. Capone gets on next, and lets us know how Noreaga held him down throughout his lifetime. I haven’t mentioned it yet, but songs like this show how well CNN’s chemistry is. It seems like you can’t have one without the other and this track clearly shows it.

12. Thug Planet
Featuring Imam Thug & Musaliny; Produced Tony Heathcliff
This was the first street single and I can see why. The beat sounds like it was left off the original War Report,and Iman Thug & Musaliny go hard as they return for part two. Another close one but I’d give this Capone. His flow sounds rejuvenated.

13. Scarface
Produced by araabMUZIK
This is the shortest song on the album. The man who produced half of Cam’s Crime Pays lays down a decent track that allows Capone and Noreaga to rap about their Scarface visions. This is good, but seems to be missing something (and don’t tell me Cam’ron).

14. The Corner
Featuring Avery Storm; Produced by M3
The chorus by Avery Storm brings down the song which is sad because he dropped a nice whistling beat. I find this track similar to “Hood Pride”; everything works except for a chorus that’s not needed.

15. Obituary
Produced by DJ Green Lantern
The War Report 2 ends with a song dedicated to the people who CNN lost over the years. DJ Green Lantern produces a respectable beat that fits the mood of the song. This song may be a bit long, but it’s a good way to end the album.

After the war come the obituaries.

Bottom Line:
I’ll be the first to admit that this album was much better than I expected. Channel 10 was a disappointment, and I felt the duo was taking the recently popular sequel route such as many 90’s rappers are doing lately. I didn’t think a year was enough time to revisit one of Hip-Hop’s most influential street records. Plus, I figured that the duo couldn’t hold down an entire album without their man Tragedy. However, Capone and Noreaga came with their best shit. They displayed how well their chemistry goes together from track one to track fifteen. The production was on point too. Maybe Raekwon had something to do with it because he executively produced the album. There were only two tracks that seemed out of place, and they were still rapping about the hood in those. If you loved their first album, then I highly recommend picking this up. If you’re tired of rappers singing and getting too damn emotional, then give this a listen, and CNN will show you how Queens did it back in the day. Peace.