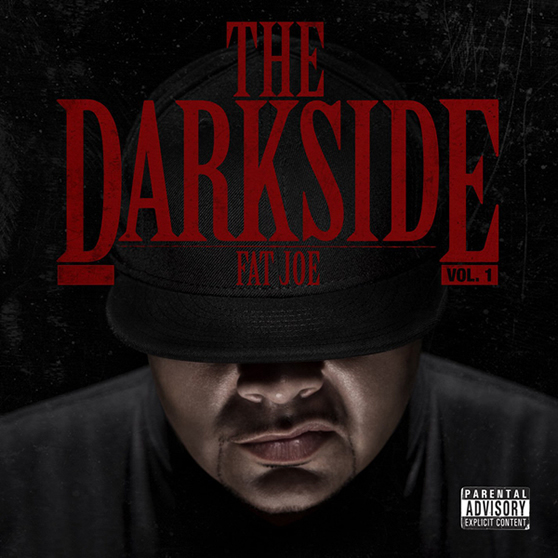 Sometimes it’s forgotten that Fat Joe released his first album in 1993 with Represent and that his original name was Fat Joe Da Gangsta. But unlike some of his peers who have clocked around the same years in the rap game, Joe doesn’t get mentioned as one of the greats.

Fat Joe has chose this album, The Darkside Vol. 1, to show the naysayers that he should be mentioned in your “Top 5 Dead Or Alive”. In recent interviews, Joe has stated that this album was more darker in content than his previous outings and a reminder of what New York Hip-Hop is. He even goes to call The Darkside a classic. While it’s hard to say if these statements are promotion or sincerity, we’ll let the music speak for itself.

1. Intro
Produced by Scram Jones
The mood is automatically set with the Scram Jones production; the ominous chorus singing sampled here over a hard nosed beat adds to this. Joe keeps his side of the deal with fitting rhymes:

“It’s the reaper man/That’ll still rob the refer man /And rap music ain’t the only thing we deeper than”.

He even throws in a quick diss about 50 Cent’s funeral for good measure.

We’re off to a nice start.

2. Valley Of Death
Produced by Cool & Dre
So far Joe is keeping his promise as he keeps it street here over a Cool & Dre beat. The production duo proves they can still keep in gangster too as the beat here is exactly that. I can see a lotta rappers getting there 16’s ready for this track. Joe does it’s justice though and all in all it’s a standout on the album.

3. I Am Crack
Produced by Just Blaze
This was one that jumped out at me on the tracklist especially since the last time Joe and Just Blaze collabo produced “Safe 2 Say (The Incredible)”. For Just’s part he delivers his signature sound with excellent drums as well as  sound clips to add to the dark ambiance. Joe Crack takes the role of the drug he got his nickname like it was the 80’s:

Yea. Check for this one too.

4. Kilo
Featuring Clipse & Cam’ron; Produced by DJ Infamous
This song is about helping out your community. Whatever. With all the rappesr involved plus a track called “Kilo”, you know what to expect here (If not, wait till you here the hook). This is one of those cases where the billing and expectations are too high and to me the track was a little of a let down. But what did I expect; cocaine to come out the speakers? Actually yes.

5. Rappers Are In Danger
Produced by DJ Infamous
This one keeps up with the album’s theme but it’s not really anything here to make you take notice. I was feeling the scratching on the hook but the rest is average and that includes the beat and Joey’s rhymes.

6. Slow Down (Ha Ha)
Featuring Young Jeezy; Produced by Scoop DeVille
The first single off the album. Yes, I know it flips Soul II Soul’s “Back To Life” but after you get past that, it’s wrap. It’s almost exactly what Scoop DeVille did with “It Takes Two” for Snoop’s “I Wanna Rock”. Even for a club song it’s kinda lazy.

7. If It Ain’t About Money
Featuring Trey Songz; Produced by Cool & Dre
Like the previous one, this is a track aimed at the dance floors and the radio. Trey Songz does his part but it’s really a paint by numbers affair. I guess Fat Joe couldn’t make an album that’s all dark. More proof of that with this being the second single off The Darkside Vol. 1.

8. No Problems
Featuring Rico Love; Produced by Scoop DeVille
I’ve already referenced Snoop’s “I Wanna Rock” earlier n the review, but this REALLY sounds like “I Wanna Rock”. Watch for the Diddy’s quick cameo (“Slow down son, you killing them”) but other than that, it’s better to just move along.

9. How Did We Get Here
Featuring R. Kelly; Produced by Raw Uncut
I guess Joe wanted to put all his “non-Darkside” tracks together huh? Seeing that R. Kelly helped give Joe one of the biggest hits of his career, I can understand why he gets him for the assist here. The track is introspective about overcoming the street life to achieve things greater:

It guess it works.

10. Money Over Bitches
Featuring Too $hort & TA; Produced by Raw Uncut
Most of time seeing Too Short on a song, it’s pretty safe to assume the subject matter. Well, this one isn’t really a “fuck freak bitches” song but you get my point. It is a “probably should have left it off the album” song. It’s not bad but it seems out of place here. The beat and subject matter also seem dated.

11. Heavenly Father
Featuring Lil’ Wayne; Produced by Streetrunner
I don’t know who had it first, but I heard the same beat on Young Chris’ The Network 2 (Even with the Weezy hook). Joe still drops some of the most personal lines on this song:

“I paid niggas’ rent, even paid nigga’s bails/Gave niggas jobs so they wouldn’t go to jail/Did so much dirt niggas knew I wouldn’t tell/Paid for some funerals, they probably went to Hell/I don’t owe nobody nothing, man I gave that bitch a mil/I ain’t beatin’ round the bush, I’m just speaking on what’s real/I ain’t talkin’ on no bullshit, man I’m talkin’ bout what’s real/I ain’t justifying beatings but she cheated on my nilz/Cheated with his brother, god damn this bitch ill/Probably the reason my nigga never left a will/Things you’ll never know/Have mercy on his soul/Big Pun/One of the most realest I’ve ever known”

Now if you know about Fat Joe’s beef with Big Pun’s wife as well as former friends, you know these rhymes deal with that. This is one to listen to.

12. I’m Gone
Produced by DJ Premier
This is by far the best track off the album. On recent albums, Joe has made it a priority to get a beat from Premier and it’s been for a reason; Primo still gets busy. The fact that this could be taken as a semi Guru tribute also makes this a great track:

“Primo on the beat yeah I know it sound different/But his mans just past yeah his souls just risen/Cold cold world is the word that was given/As he see fithteen with the burner out of prison/Gangsta, fuck that I’m Gang Starr/Tell Nas Hip-Hop’s dead now my mans gone…”

Over great signature production by DJ Premier, this song could also be called Fat Joe’s version of “Last Call” or “My First Song” as he spends a good amount time talking and reminiscing about his rise as a rapper. It gives you his history and makes you appreciate it. If you only hear one song off this album, it should be this one.

13. At Last Supremacy
Featuring Busta Rhymes; Produced by Cool & Dre
Okay, “I’m Gone” should have been the last track. Period. But this track isn’t bad and gives you the same tone the album was originally shooting for. Busta Rhymes handles the hook which is Vincent Price like spoken word that fits over a horror movie inspired beat. Joe takes times to fuse lyrics with his musical catalog:

“I had to Represent because I’m Jealous Ones Envy/Bossed up to king Don Cartagena, don’t tempt me/Dared niggas to jump at he pump, they call me crazy/But where was all the Loyalty at? Niggas betray me/It’s All Or Nothing, just load the clips up and ride/Can’t tell a nigga nothing it’s just Me, Myself & I…”

Bottom Line:
I’ll give Joe props for trying to go back to his roots and make a hardcore gangsta rap album. I’ll also take points away from him for not sticking closely to that script. The start of this album had me hype as it had three straight tracks that not only kept with the original theme but were also good. Then it fizzled from there.  I do understand that in today’s music market most feel that you have to make a few tracks for the radio to sale records, but in Fat Joe I think he should stuck to his guns (It worked for Raekwon last year). The lyrics on this album are also good but it barely extends beyonds that; they’re sometimes clever but not as a Rick Ross or witty as a Young Jeezy or Cam’ron (Who at this time make the same kinda music as Joe does).  Joe was one to something here; the best tracks here have the making of something special. Maybe on Vol. 2 well get the real tale from The Darkside.