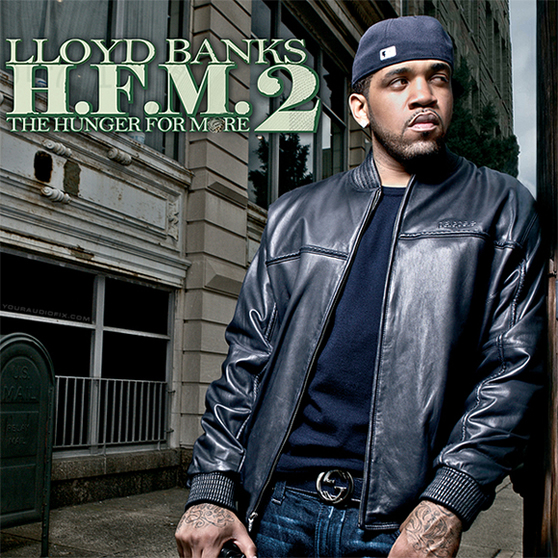 It’s funny what one song can do for a career. That one song for Lloyd Banks is “Beamer, Benz, Or Bentley”. While a talented rapper, it seemed like Banks’ career was on a downward spiral. Not only that, but his mentor 50 Cent’s rap career as well as the popularity of his crew is definitely not what it used to be (When thelast time you heard somebody say “G-G-G-Unit”).

Then “Beamer, Benz, Or Bentley” dropped, sold over 500,000 copies, allowed Banks to ink a shiny new record deal, and gave him a new lease on his rap life. This is visble in the title of his new album H.F.M 2 (The Hunger For More 2). Not only is he trying to prove he still has the same fire as he had earlier in his career, he also wants to get back to the level as he was with his platinum selling debut, The Hunger For More. Let’s see if he accomplished this.

1. Take ‘Em To War
Featuring Tony Yayo; Produced by Cardiak
The album starts of great with Banks sounding as hungry as ever over hard drums and sweeping violins. He has some memorable lines here but it’s the hook that pushes this song over the top:

Fuck talking, let’s take ’em to war/Drama after drama ’til they laying on the floor/What the fuck do you take me for/Eye for and eye time to even up the score/I rather be not here than hungry/I’m sick when I’m not near my money/They want me to lose but I’m a win/I’ made it there before and I’m a make it there again

As you may notice from the credits, Yayo is a guest on the track also. And surprisingly the track quality doesn’t go down when the song gets to his verse. It’s not his best verse (That’s on “Runnin'”), but it’ll do.

2. Unexplainable
Featuring Styles P; Produced by Cardiak
Here Banks keeps the mood going and has even more menacing production (The last track and this one were both produced by Cardiak). But even with that, I couldn’t get into this one. For one, the cadence of the hook matched with the beat make the song tedious. And while Styles P is a good rapper, for some reason this year he has brought down a few songs (*cough “B.M.F.” cough*).

3. Payback (P’s And Q’s)
Featuring 50 Cent; Produced by Grandz Muzik & Bliz Money
Seeing 50 Cent’s name here, I was curious to hear him and Loyd Banks on the track together (Remember those old G-Unit mixtapes?). But Curtis only has chorus duties on this one (Soulja Boy deserve verses but not Banks?). Either way, this track is a good example of a grimy New York street record. Actually, this kinda sound like something that would be on 50’s album The Massacre. Banks makes it his own though:

I made my flow up at the corner store/ You hear niggas rapping out here, I just want it more/Turn the music down, you can hear my stomach roar/Bagged a hundred bitches last years just bagged a hundred more.

4. Home Sweet Home
Featuring Pusha T; Produced by Nick Speed
For some reason, I would have rather heard Pusha and Lloyd on something with a faster tempo. Not to say that the track isn’t good; it’s a well produced slow tempoed track by Nick Speed. If we’re playing the “Who Had The Better Verse” game, the winner is Pusha (Who’s been on a tear lately):

Throughout history they thrown shots at the great/But I shoot back, the lord ain’t design me for hate/I never understood Martin Luther with is speech/With the whole world watching, me turn the other cheek? Never.

5. Beamer, Benz, Or Bentley
Featuring Juelz Santana; Produced by Prime
This song marks Banks’ career going into the upswing. Almost a year after it’s release it still holds up; especially on a nice sound system. I wonder how many times this song has actually been played on a system inside an actual Mercedes Benz, Bentley, and BMW; never when I played it.

Sidenote: Was I the only who liked the remix?

6. So Forgetful
Featuring & Produced by Ryan Leslie
Of course when you see a R&B singer on a song, it’s safe to assume it’s a song for the ladies. Surprisingly, I like this one. Ryan Leslie shows his talent as he not only kills the hook but provides the production. The beat is a good backdrop for Banks as he describes how it’s hard to keep up with all the women in his life. This one is ripe for the radio.

7. Father Time
Produced by Greg “G’Sparkz” Ford, Jr.
This sounds like it could have fit easily on the first Hunger For More (It’s sounds like Eminem could have been behind the boards too). One funny thing is that I thought the song was about “sonning” niggas but of course it’s loosely about the passing of time. The hook does this weird thing where Banks starts singing and the beats get soft but it’s not enough to take down the song (And you get used to it pretty quick).

8. Start It Up
Featuring Kanye West, Swizz Beatz, Ryan Leslie, & Fabolous’ Produced by Cardiak
In a year that saw posse cuts become a standard (again) in Hip-Hop, this one could be easily listed in the top 5 of 2010 (Even though it seems like this group recorded either before or after “Christian Dior Denim Flow”). While there are some prominent rhymers on this track, the most memorable thing that comes out here is the hook provided by Swizz Beatz. I can picture fans from the club to the concert chanting along with this.

9. Celebrity
Featuring Akon; Produced by Dirk Pate
As soon as the track come on, it immediately feels like something Akon would be on the hook for. Unfortunately, I think that Akon brought down the song. If you can get past that though, you can catch some good lines from Lloyd Banks:

The loses I took in the gut yo/The work still here, I’m just cooking it up slow/Clearing my mind and whipping the truck low/My pop dead, but he live through his son though/If rap ain’t work, I’d be pimping on some hoe/Still eating lobster and shrimp in the bungalow/And back like crack, over the drum roll/You know, wherever I go the gun go

There was an early version of this song that leaked that had Eminem on it. Why did they take him off this song and downgrade him to bonus track status, I don’t know (Didn’t 50 Cent and Eminem prank Banks about Em doing this particular song?).

10. On The Double
Produced by The WatcherZ
I had to look at the credits again to make sure that Swizz Beatz didn’t produced this one (It sounds a lot like his style). While there are times on this album where Banks succeeds in making club records, here it sounds forced. It could be one of those songs that sound great at the right location, but for now, I’ll pass.

11. Any Girl
Featuring Lloyd; Produced by Dready
This was the second single released off H.F.M. 2. It was coming of the buzz of “Beamer, Benz, Or Bentley” and while I didn’t think it had the same level of quality, I didn’t think it was a bad track. It is unoriginal. Lloyd does a good job in the R&B singer on a rap record role while Banks talks about the usual money, women, and money subject. It does what it’s suppose to.

12. I Don’t Deserve You
Featuring Jeremih; Produced by J.U.S.T.I.C.E. League
Even though this marks the third radio friendly track in a row, what makes this one different from the others is that the production is provided by the J.U.S.T.I.C.E. League. A smooth laid back beat is provided while Banks explain why this certain chicks he deals with may need to move one. This song may be a future single for The Hunger For More 2 and I could see why.

13. Sooner Or Later (Die 1 Day)
Featuring Raekwon; Produced by Frank Dukes
Lloyd Banks gets The Chef to help close out the official ending of the album (“Official” because there are four bonus tracks for The Hunger For More 2). While the combination of these two rappers didn’t seem to fit when I first heard about this track, it works. Frank Dukes use of soul samples here also make it work as a good finale.

Either kill me or get killed worse.

Bottom Line:
While Lloyd Banks didn’t exactly reinvent the wheel on this album, he is in fine form and seems like he is in his element on most of The Hunger For More 2. Banks does a good job of mixing the album with radio friendly songs and street records. But that may be the problem. A lot of the material is just good and doesn’t elevate Banks to the next level of rapper royalty. Even so, if the motivation of Lloyd Banks was up for questions, this album proves that he’s still hungry. Hopefully, he continues to push his self and continue to be hungry for more success.