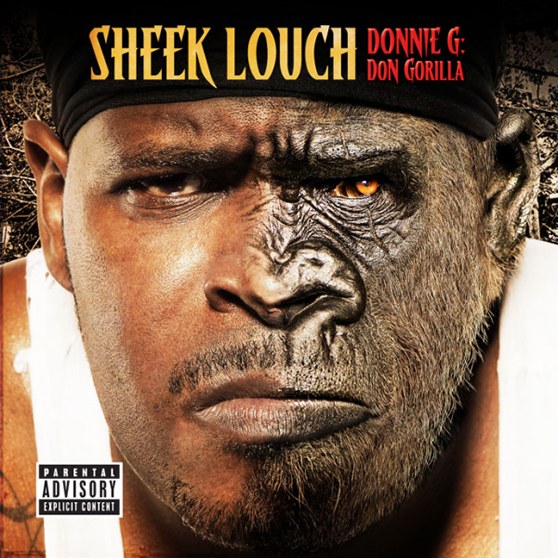 No disrespect to Sheek Louch, but it wouldn’t be a bad assumption to say that he is the least popular member of The LOX. He never was fun or fly like Jadakiss nor was he as deep or as gutter like Styles P. This wasn’t for lack of talent and may be more based number of notable songs produced by his fellow partners from Yonkers. So when I heard that Sheek had made the jump over to Def Jam, I was intrigued. Would his career get a boost like his LOX brethren and now labelmate Jadakiss? Would his next album finally be the one that will remove that “of the LOX” tag when he’s featured on songs?

Then Def Jam stuck his album release date in December with little promotion with the rest of the overlooked Def Jam veterans . Did I mention the shitty ass album art used for Donnie G: Don Gorilla? Do I need to?

Needless to say, my expectations immediately fell for this album. Well, maybe the music will save this project…

1. Rhyme Animal (Intro)
Produced by Big H
The album starts off with Sheek spitting his usually abrasive style over an energetic beat (Which uses a familiar Public Enemy “Bring The Noise” sample):

“You know how the don be/Sheek Louch. Where he at?/Under the palm tree/Little monkey niggas run around. Jumanji./Legend in this game like Pimp and Bun B”.

Nothing really notable here but it works as a functional intro.

2. Get It Poppin’
Produced by The Futuristiks & Team Ready
Is the term “Get it poppin’” still used these days? Well Sheek is still using it and that should be a sign that this track sounds a little dated. And that goes for the beat and the lyrics. Matter of fact, if you were to put this on the LOX’s 1998 debut Money, Power & Respect, I don’t think many people would notice. Its also would be a track you’d forget pretty easily.

3. Club Jam Packed
Featuring & Produced by DJ Webstar
Okay, I see what Sheek is tryng to do here. It’s obviously he’s trying to get radio play. So he goes and gets Webstar? I gave it an honest listen and I hope he Sheek didn’t pay for this beat. Not to say Sheek is in the clear because his lyrics aren’t that good either. This sucks. SKIP! Sidenote: Listen closely to hear DJ Webstar do a pretty good Lil’ Jon impersonation.

4. Out Of The Ghetto
Featuring Kobe Honeycutt; Produced by Don Cannon
CANNON! Leave it to Don Cannon to break the streak of terrible tracks. And what’s good here is that this could be played on the radio. The difference here and the previous tacks is that it doesn’t sound like Sheek is trying too hard. It’s gritty, has a nice hook, and Sheek sounds good over it:

“Never given nothing, always had to go and get it/Bandana on my face; Yankee fitted/So now you understand where I’m coming from..”

5. Make Some Noise
Featuring Fabolous; Produced by Pree-Recorded & Red Spyda
When I saw Fabolous name here I’ll admit I was kinda excited. But the results are mixed. I understand with today’s technology, you don’t have to be in the same room or even state when recording a song, but it’s really sounds like these verses were pasted next to each other. Sheek & Fab do average jobs here over average production. The results: Average.

6. Blood & Tears
Featuring Casely; Produced by Nemis
I had to reread the credits again to check out the feature here; Casely sounds a LOT like Ne-Yo here. We do get an inspirational song from Sheek though. Yea, it’s kinda sappy but you can’t hate too much on what Don Don is trying to convey:

“No father figure; just getting bigger/But I ain’t mad at you Pops, you still my nigga./Had my little jobs; sold my little cracks/But I really want my voice heard on wax”

7. Nite Falls
Produced by Statik Selektah
Here DJ/producer Statik Selektah flips Planet P Project’s “Armageddon”. It’s bass driven and the track is well produced. Sheek does his thing by letting the sample finshes his lines (See: “Good Love”) but for some reason, this track felt awkward; like it could have been better. It may need some more listens.

8. Party After 2
Featuring Jeremih; Produced by Darius “Phonix” Barnes
On the first single for Donnie G: Don Gorilla Sheek gets his labelmate Jeremih to add some R&B flavor to the track. What it lacks in originality, this song makes up with a nice beat. I wouldn’t ask for this song to be played in the club but I wouldn’t minds if it did. Check out the music video here.

9. Ol’ Skool
Featuring Bun B; Produced by J. Cardim
As well as Bun B is loved in the Hip-Hop community, he HAS to be charging a low fee for a feature (Seeing him on any rappers’ album never surprises me anymore). I surprised to hear this Houston inspired beat by J. Cardim; he doesn’t do a bad job either. The song is an oe to old school cars; it kinda works.

10. Picture Phone Foreplay
Featuring Kevin “KC” Cossom; Produced by Bangladesh
Don’t get too excited seeing Bangladesh name on the beat, he definitely didn’t give Sheek a “A Milli” or “Break Up” here. What do get here is mediocre Auto-Tunning and played out subject matter. SKIP!

11. Dinner Guest
Featuring Jadakiss, Bully, & Styles P; Produced by Red Spyda
I expected to see Styles & Jadakiss on Donnie G: Don Gorilla, just not so late in the album. I’ll give this to D-Block, they know how to incorporate their name into a chorus (“Guess who’s coming to dinner. Mighty D-Block“). While the songs won’t rank up there with previous LOX collabos, this reggae inspired one has the group in it’s element. The murder rate is boosted a little here.

12. Ready4War
Produced by Y-Not
To close out the album, Donnie G goes backs to his guns (He actually raps about making a sawed off shotgun). As you can probably tell by the title, Sheek is ready for war. For some reason the beat reminds me off Capone-N-Noreaga’s “Y’all Don’t Wanna” (*shrugs*). Doesn’t feel like a strong ending.

Bottom Line:
This album is all over the place and you don’t get a feeling of who Sheek is as an artist. I don’t mind that rappers feel the need to include songs that cater tho the radio. But I do have a problem with them making terrible cookie cutter songs for the radio. You get some of the gritty Sheek here that gained him fans in the past, but it’s very brief. Hopefully on the next album Sheek doesn’t try so hard to please everybody and just makes the album his fans want. Until then, the gorilla on this album stays cagged.