Travis Barker – Give The Drummer Some [Review] 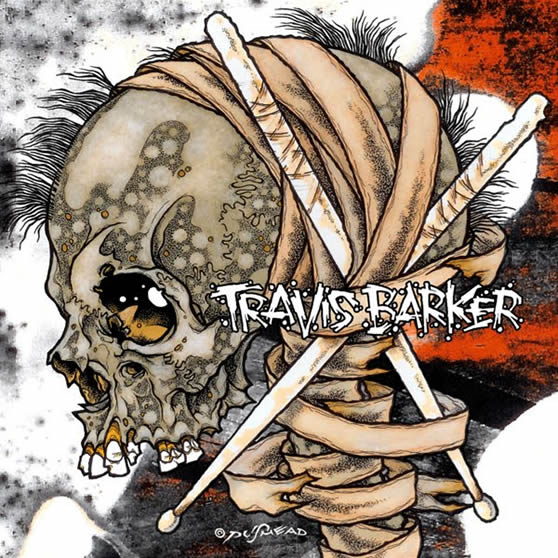 Even though Travis Barker’s roots started with Blink-182, over the years his Hip-Hop connections has grown immensely. From producing tracks for rappers like Game (“Dope Boyz”) & T.I. (“You Know Who”) to remixing popular Hip-Hop tracks like “H*A*M” & “Hard In Da Paint” to even forming groups with rappers & DJ’s like Paul Wall with Expensive Taste and DJ AM with TRV$DJAM (R.I.P. DJ AM). All of this culminates in the release of his debut album Give The Drummer Some. Well can the drummer get some?

1. Can A Drummer Get Some
Featuring Lil’ Wayne, Rick Ross, Swizz Beatz, & Game; Produced by Travis Barker & Swizz Beatz
I stated earlier that about not being that impressed with the album’s first official single “Can A Drummer Get Some”. A month or so after my initial listen and much hasn’t changed about my thoughts on this track. While it does boast okay guest verses from an heavy lineup with Weezy, Game, & Ross, the whole thing comes off as generic Rap/Rock. Plus Travis drumming isn’t really highlighted much.

2. If You Want To
Featuring Pharrell & Lupe Fiasco; Produced by The Neptunes
As soon as the track starts, you hear The Neptunes stamp on it. The duo of Pharrell & Chad aren’t what they used to be but they help deliver a good song here. Lupe handles the verses (That at times sounds like a freestyle) and Skateboard P does the hook. Travis (of course) handles the drums but this go around they don’t get too overshadowed. Note that the Lupe featured track on Let The Drummer Get Wicked was also one of faves there too. Also for some reason, this track felt like a good place for a CRS remix. Just saying.

3. Carry It
Feat. RZA, Raekwon, Tom Morello; Produced by Travis Barker & RZA
For some reason I thought RZA had stopped rapping. I guess I was wrong because here he unleashes a big dose of his Bobby Digital weirdness (*Makes Bobby Digital sound effect*). Both him and Tom Morello’s guitar sound at home here; The Chef not so much. Travis & Morello get a breakdown at the end to make sure we remember who’s album it is. Even after all that it’s still borderline basic in terms of style.

4. Knockin’
Featuring Snoop Dogg, Ludacris, E-40, Dev; Produced by Travis Barker
The beat here is simple but more anchored by Travis Barker’s drums (It sounds crazy on a good sound system). While I wasn’t that excited with the lineup of rappers here, the performances are only serviceable (Nothing special; Luda of course has the best verse). But with as good a drummer as Travis Barker is this track is kinda boring but that may be partially attributed to the extra mellow chorus.

5. Jump Down
Featuring The Cool Kids; Produced by Chuck Inglish & Travis Barker
This album could blend in on a Cool Kids’ album mixtape without any problem (Due to Chuck Inglish helping behind the boards). Even though I’m not the biggest fan of The Cool Kids’ music, I wil say that the track isn’t bad and probably better if you are a fan of Chuck & Mikey Rocks. It does have a cool 3D video; check that out here.

6. Devil’s Got A Hold
Featuring Slaughterhouse; Produced by Travis Barker
Excited to see Slaughterhouse here but not that excited when the track actually starts. But I was a bit hasty; the track starts out slow but picks up quick and turns out to be a keeper. All four members of SH turns in good verses about walking on the wrong side of righteousness. It’s also on this track where you can really hear the changes that Travis Barker makes in his drum patterns and shows the pluses of having a live drummer.

7. Let’s Go
Featuring Yelawolf, Twista, Busta Rhymes, & Lil’ Jon; Produced by Travis Barker
Almost all the things on this tracks works; the beat accommodates the fast rapping style that all rappers involved can deliver (And they do deliver). What’s the problem? Uh, Lil’ Jon. He’s on the hook and he makes the track sound dated. But don’t let that scare you off; besides that the track is okay.

8. Saturday Night
Featuring Transplants & Slash; Produced by Travis Barker
This song was performed on Conan and it didn’t really grab me and hearing the studio version didn’t really change that. I’ve never been a fan of Skinhead Rob but the vocals here really bring this song down; it’s really terrible if you wanna look at it as a rap song. The instrumentation of this song keep my hand off the skip button. Fuck it. SKIP!

9. Cool Head
Featuring Kid Cudi; Produced by Travis Barker
Remember when Kid Cudi said he was tired of rap and was gonna release a rock album? Well, something tells me that it won’t sound that different from this track. But that’s not a diss, it’s the good drug influenced music that fits Cudder’s style and props to Travis Barker for make a beat that does so. Watch out for the drum solo at the end.

10. Raw Shit
Featuring Tech N9Ne & Bun B; Produced by Travis Barker
This song can be labeled and album filler; it’s not bad, not great, and forgettable. Tech and Bun both do good jobs over the synthesized beat but nothing to make the song stand out. I also thought the hook was a little awkward.

11. Just Chill
Featuring Beanie Sigel, Bun B, & Kobe; Produced by Travis Barker
For some reason, a Beanie Sigel feature hear surprised me. I probably wouldn’t have sequence Bun B on back to back tracks though. The track itself is change up in pace from the previous and the introspective feel of the lyrics is well matched by the production (“My baby momma trippin’/My son need pampers…”). Most of the time I hate choruses done by Kobe but I can mess with this one.

12. Beat Goes On
Featuring Cypress Hill; Produced by Travis Barker
Now the Cypress Hill feature didn’t surprise me at all. While I earlier commented on a track having a generic Rap/Rock feel, I didn’t mind this one here. The reason the heavy guitar and drums work with Cypress here may be because this sounds like something that would be on some of their recent albums. And that ends the “non-bonus” portion of the album.

Bottom Line:
When this album was announced, Travis Barker said it would be a “no-genre” album. That’s not necessarily true. It’s mostly a rap album. Yes, it borrows from one or two other genres, but it’s full of well known rappers rapping over drum heavy production. It has some standout tracks but not enough to make it worthy of the all-star cast. That’s the problem with Give The Drummer Some, it most of the time doesn’t sound different from any other producer compilation. There are times that Travis make you remember that he is not working with MPC, but for the most part you’ll forget whose suppose to be the star of Give The Drummer Some.