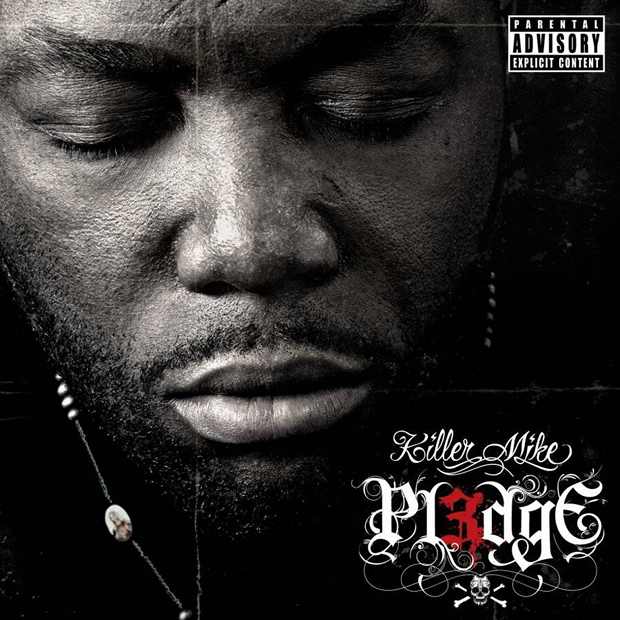 By this point, we’re all familiar with Mike Bigga and his legacy. He’s one of the illest rappers that people routinely forget to name when they talk about their faves, and I still don’t know why that is. He’s back with the 3rd in his Pledge Allegiance series and this one is simply titled, Pl3dge. I STILL even at the time of writing this album want to go back and give his last one that extra .5 because of the strength of the first half of the album…but I’ll refrain yet again. Anyway, I’m curious to see if we get that same sort of “filler” material to the back half of this one or if it’s heat from start to finish.

1. So Glourious
Produced by Smiff & Cash
I’ve never been a fan of those routine intro tracks to be honest. I think the first track is your chance to not only set the tone for the album, but with albums being routinely 12 tracks long, you’re giving me one less track with a wasted intro. Bigga takes this chance to kick the door in with “So Glorious.” When I put together my “Best of Killer Mike” album for my iPod, this is the first song, hands down. Want to know who Mike Bigga is, this song is the blueprint to his existence.

2. That’s Life 2
Produced by Smiff & Cash
Just like the first version of this song from the first CD in the series, he calls folks including Cosby, Oprah, Obama, Puffy, Forbes, Jason Whitlock, Religious Zealots, Bishop Long, mega churches, Bill O’Riley, Hannity, Limbaugh, and damn, pretty much everybody that seems to have forgotten what’s real out here.  Just like that first song as well, he’s using this song to take issue those that act under the guise of giving back and taking care of their own, but do so while not even entering the hood. As well, he’s talking about those that teach Jesus’ way while rollin’ in Bentleys and private jets. I could go on and on about who/what he’s taking issue with on this song but I won’t even desecrate this song by trying to post lyrics. This may very well be my favorite Killer Mike song ever, bar none.

3. Ric Flair
Produced by Sweatbox Productions
Brother Jerm asked me if I liked this song before I heard it. I thought he meant another song because of my strategy for listening to this album. I didn’t check any of the features or names of the songs at all. I enjoy Killers music better that way on the first listen. Anyway, I replied that I wasn’t impressed…thinking I heard the song he meant. I was terribly mistaken. THIS “Ric F’lair” lives up to the name. Y’all know I’m a wrestling head and hail Ric Flair as the best to ever do it, so this song gotta be good for me to give it props like that. Complete with some Flair soundbytes and a dope track, this song is ill as hell. The attitude on this song is turn’t all the way up. Essentially, this is audio Scarface.

4. Ready Set Go
Featuring TI; Produced by No I.D.
When I heard this on the Bang 3x mixtape, I was sad because I figured that it wouldn’t be on the album. I love being wrong sometimes. The one on the mixtape is the Remix version (and that is included as well). This version sans Big Boi is still tough as hell.

5. Burn
Produced by Sweatbox Productions
“Burn” is another track in the seemingly endless catalog of Mike Bigga’s call to arms. This is about seeing the inadequacy’s and gaping holes in the philosophy and laws of the country. I can’t do this song any justice, check the lyrics:

“They say love Jesus and listen to your Pastor / but Jesus told the truth and the Pastor’s a lying bastard / all he talk about is economic elevation / and all Jesus talked about was soul salvation / Jesus sat with the sick and he walked with the poor / and if he gave blood for our sins why we givin’ more / I got some gangsta disciples in the church with me tonight / with $5 worth a gas and a matchbook to light / (burn, this mutha’fucka down).”

6. Go Out On The Town
Featuring Young Jeezy; Produced by Raz (of Beat Billionaire)
I wasn’t a fan of this song from the first key played on the track. It sounds like one of the beats you hear all over YouTube or Myspace. I had an aversion to it before even hearing the first part of the chorus or hearing Jeezy on it. Killer does his thing per usual, but I’m not a fan of this song at all…Jeezy being on it is just a coincidence.

7. God In The Building II
Produced by The Beat Bullies
If you read my review on Mike’s last album, then you know “God in the Building” was my fave on that album. As soon as I heard the singing on this track, I knew what this was, no JD. I’m not sure if the song is that dope or if it’s just because of the song it’s following, but either way, this song is literally, music to my ears. The Beat Bullies provide some serious neck break bass and keys (amongst other things) to give a sturdy foundation for Bigga to take us on another ride. Somebody needs to start the Church of Mike Bigga because he’s definitely preachin’ yet again.

8. Players Lullaby
Featuring D the Legend & Twista; Produced by Tha Bizness
This song took a few spins for me to start liking it. The bass hit seems to be a hair early and the track only slightly builds after a minute in, so it just feels off. It does have that UGK southern drawl to it so it entices you to keep listening no matter what your first opinion of it is. As far as the song itself, as we’ve learned, songs that Twista hops on always sound like Twista tracks, so you know what’s going on here without hearing it. It’s a cool song, but doesn’t take move me like other songs on the album do.

9. Animal
Featuring Gucci Mane; Produced by Lil’ Lody & Young Shun
I promise, I was hype on this song (even after hearing Gucci’s call at the beginning) up until the hook. This may be one of the most unfortunate hooks of 2011. If you have a loud system, you may want to turn it down just before the 55sec mark unless you want someone to call Peta. As a proud Gucci hater, I was expecting the worse…but he didn’t do bad on this one. I won’t say it was lyrical at all (…”I’m a dog, you’re a cat / you’re the ball I’m the bat…) but he rode the beat OK. He’s a bit off at the end of his verse, but he doesn’t derail the song…the hook does that for him.

10. American Dream Prelude
Produced by Sweatbox Productions
This intro isn’t phenomenal, but it definitely helped get my hype for the song. “We all say we love Martin Luther King, but we all want to live like Don King, don’t we?” This cat is a poet…and I’m serious. You gotta hear the rest of this. I think we need to start restructuring who we call conscious or at least start a category called conscious thuggary, cause this man is not a game.

11. American Dream
Produced by Sweatbox Productions
Seamlessly after the intro, the verse kicks in and Mike goes on to dissolve any belief that white collar crime is different than the crimes that most folks that look like Hip Hop are locked up for. The differences are largely the product and the color of the “perp”, but the schemes and plans are largely the same. Again, Mike is preaching on this joint over a very soulful track that sounds like it was left over from some blaxploitation movie (I’m sure that’s no accident either.)

12. Everything (Hold You Down)
Produced by Sweatbox Productions
Mike says, “…this song is not about all women, this song is about my woman.” Well, I’ll try and fast forward that part when I play it for my woman because this song works for me too. I don’t know much about Sweatbox Productions, but this album definitely put me on notice. The track is fantastic (I’m officially looking for an instrumental for this). This song talks about spending endlessly on his woman…HIS woman being the difference between trickin’ and taking care of home. A lot of songs out there talk about throwing some stuff at a chick because she’s pretty or to prove that they runnin’ things, this song perfectly illustrates that he wants to spoil his woman because she’s holds him down and has his back. Dedication should be rewarded no?

13. Follow Your Dreams
Produced by DJ Speedy
“Follow Your Dreams” has a great message. I don’t know who’s singing the hook, but I’m not sold and it’s mastered like it was added as an after thought…after it was recorded on a mic with the volume too high. You see the title, so you know what the song is on. It took a few spins for me to really dig this song over the patterned style, but I like it.

14. Swimming
Produced by Flying Lotus
We’re treated to a bit more syrupy slow melody on this one and some more production that I’m not a fan of. This is similar to what happened on his last album. As the album went on, it seems like the quality started to wane and we got fillers. Killer Mike is one of the few dudes that can put out a 10 track album and leave you completely satisfied, I almost want him to try doing that. This song sounds like Castelvania with bass, and I’m not really feeling that. Y’all have heard me talk about sex rap so I’m not really a fan of this one.

15. Ready Set Go (Remix)
Featuring TI& Big Boi; Produced by NO I.D.
This is the version from the mixtape, you’ve heard it and if not, you need to slap yo’self to sleep.

Bottom Line:
I Pledge Allegiance to the Grind parts I and II had the same pitfalls, that being that there is some strong material in the front half, and then an lot of questionable songs after that. This album is similar in that way. Like I said, Mike could easily cut a 10 track album and routinely be mentioned as album of the year. When you take out the Prelude and Remix, you get 13 tracks. Remove 3 and you have damn near a 5star album. Combine the top 7 from this album and the top 7 from the last, and you’d have one of the illest albums released in hip hop, PERIOD. Let’s get focused though, the real thing that separates this album from the last is that even on the lesser songs, they still help construct a complete idea of who Killer Mike is and just how dope he is as a rapper. As I stated earlier, I think it’s time we start mentioning Mike’s name with Common, Talib, Mos Def, and other emcees commonly called conscious. Where they may be the Dr. Martin Luther King’s of this, Mike Bigga is Malcolm X. His methods may be different, but his message is just as relevant and real. Keep sleeping if you want to, but this dude is not a game.

nappyPicks: It would be easier to say what songs to ignore, but even then, I wouldn’t say skip them, they may be your thing. Pick up this album, you won’t be sorry. I promise.