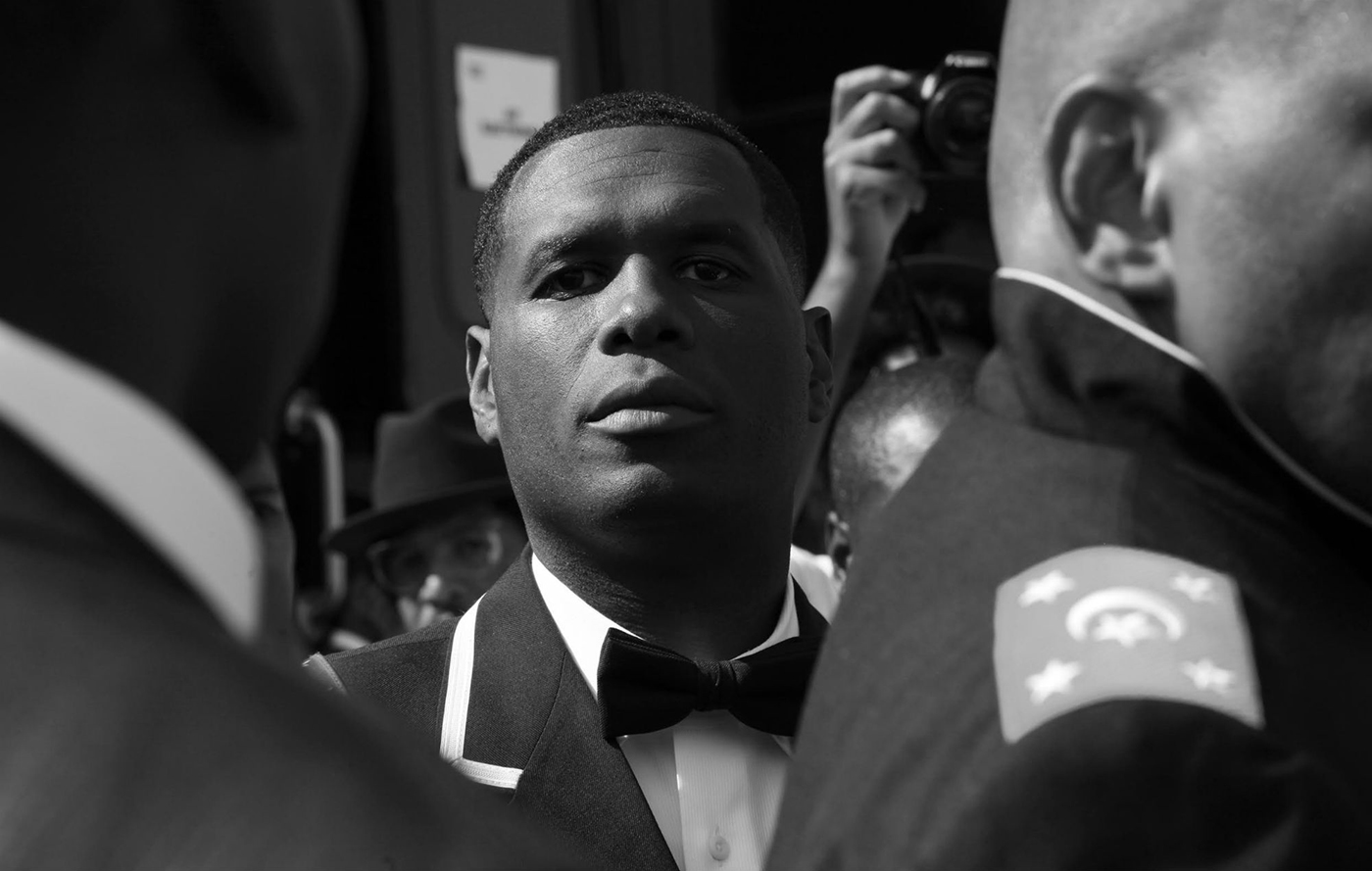 It’s been a lot of jokes about the amount of time it took Jay Electronica to release an album. For example, his most well-known song, “Exhibit C,” dropped in 2009. The announcement of his Roc Nation signing was in 2010. Hell, the first time I actually wrote about Jay Elect was in 2008. But after all the random tracks, random appearances, and the memes about the rapper never dropping an album, we finally have a proper debut album from Jay Electronica that in the form of A Written Testimony (Which was reportedly recorded over 40 days and 40 nights).

The biggest surprise to come out of this album (Besides finding out that was Beyoncé’s pool being on the cover) is that A Written Testimony is a joint project with Jay-Z. This is not mentioned on the album cover or even the tracklist (To be honest, the tracklist on the back cover is written in Arabic but still). I guess the best way to compare this to is when Ghostface Killah was featured on Raekwon’s Only Built 4 Cuban Linx…, as Jay-Z appears on every song except for one.

Either way, let’s finally get into the very long-awaited debut from Jay Electronica.

1. The Overwhelming Event
Produced by Jay Electronica
The intro is an excerpt from a speech by Louis Farrakhan. It’s backed by sweeping pianos and that makes it feel like the beginning something big.

The intro fits right in line with the music that Jay Electronica has done in the past. Where he would use lines from movies like Willy Wonka & the Chocolate Factory, this it time he uses Farrakhan talking about how “the Black people of America are the real Children of Israel.” Which makes sense seeing that Electronica is Muslim. Now for the first song.

2. Ghost of Soulja Slim
Featuring Jay-Z; Produced by Jay Electronica
I was worried that the version of Jay Electronica that we get with he finally puts out an album was not gonna be the same one that put out “Act 1: Eternal Sunshine.” It’s basically the same person and that’s not a bad thing.

Oh. And Jay-Z is here too. Speaking of changes, is it me or when Jay-Z links with Jay Electronica, shits get real Black and woke. That’s also not a bad thing as I like this older and more mature version Jay-Z that raps about civilizations destroying themselves while shouting out Magnolia Slim.

As for Electronica, he carries his weight besides Hov:

Jay Elect also handles the production and the melodies as well the trademark drop of children cheer are all here. This all works and I am relieved.

3. The Blinding
Featuring Jay-Z & Travis Scott; Produced by G. Ry, AraabMUZIK, Hit-Boy, & Swizz Beatz
The feeling of this song has a more sonic feel and I immediately know that Jay Electronica didn’t produce this one. AraabMUZIK, Hit-Boy, & Swizz Beatz all had a hand on the production so that make sense (Sidenote: You know Swizz produced a track because he will probably be the first voice you hear on it).

The two Jay rappers go back and forth over varying synths and African chants with Travis Scott providing a quick hook. I’m not the biggest Travis Scott fan but by the second time the chorus comes around I’m kinda into it.

4. The Neverending Story
Featuring Jay-Z & The-Dream; Produced by The Alchemist
When I saw an image of The Alchemist in the studio with Jay Elect and Hov, I was excited to see what they would cook up. This is it and I approve. I have always been a big ALC fan and him linking with Electronica makes so much sense. “The Neverending Story” sounds like something Elect would have put out in the late 2000s and I appreciate that.

Jay-Z over an Alchemist beat is something I didn’t realize that never happened until now. And I also appreciate that.

The song, that technically has no beat (Which samples Litto Nebbia’s “La Caida”) feels like the two rappers each in the middle of a train of thought with things like Eygpt, Orishas, Beyoncé’s mother, and Glenn Quagmire being brought up. I’m all for it.

And props to The-Dream for being able to jump from Kanye albums to a Jay-Z album effortlessly.

Even if Jay Electronica‘s Roc Nation deal ends up not being a success, we’re still getting way more new music from him than before (Even though The-Dream feature still throws me off). It’s also nice to hear Hova over signature Jay Elec sound effects. Diddy is still a little salty about the situation.

Yeah. Let’s just stick with those words. Plus I still like this song.

I’m gonna take points off for the song because called “Universal Soldier” though. I hoping that it’s referencing something with Nation of Islam or something and not that 1992 Jean-Claude Van Damme movie.

Still not sure what Travis Scott did on this song. I can kinda (and barely) hear James Blake’s contribution in the background and briefly towards the end. And Jay Electronica is credited as the sole producer on this song so it can’t be that.

7. Flux Capacitor
Featuring Jay-Z; Produced by Jay Electronica
There are a lot of things to take in on this song.

The chorus is Jay-Z interpolating Big Elt’s “Get The Gat” which was recently popularized by the LSU college football team (We see you Gemi Bordelon!) and the “Get The Gat Challenge.” I heard a few people saying they didn’t like Hov doing this part but I don’t mind it. It blends the style of the rappers here; New Orleans lyrics rapped by a New York rapper.

Speaking of Jigga, this is the song that made some headlines because he addresses the criticism he received when he entered a multiyear partnership with the NFL:

Why would I sell out? I’m already rich, don’t make no sense
Got more money than Goodell, a whole NFL bench
Did it one-handed like Odell handcuffed to a jail
I would’ve stayed on the sidelines if they could’ve tackled the shit themselves

Go on over and read Short-T’s article basically saying Jay-Z was gonna do this very thing on this album.

Props to the productions as Electronica masterfully chops up Rihanna’s “Higher” to the point that I didn’t even recognize it.

All in all, a standout track

8. Fruits of the Spirit
Produced by No I.D.
This is simple but it works.

No I.D. samples and loops up The Imaginations’ “Because I Love You” with Jay Electronica rapping a verse with no hook. This is also the only song on the album without a feature (Not counting the intro track of course):

Like Vince Staples said, we just wadin’ in the water
My people out in Flint still bathin’ in the slaughter
ICE out here rippin’ families apart at the border
Satan struck Palestine with yet another mortar
Lies from the reporters
Ass shots and stripper poles for the eyes of my daughter

9. Ezekiel’s Wheel
Featuring Jay-Z & The-Dream; Produced by Jay Electronica
Am I the only one who feels Nina Simone vibes from The-Dream vocals?

I think The-Dream’s part is maybe the best part of this song. Jigga is also just on the hook with Elect giving us two verses. It’s an okay song and the minimalist production is fine but it feels like it drags too. I guess I’m trying not to say it’s boring.

And for some reason, James Fauntleroy shows up at the end to do some quick “Oh-oh-oh, hm-hm, hm” ad-libs. Okay.

10. A.P.I.D.T.A.
Featuring Jay-Z; Produced by Khruangbin
This is the best song on the album. “A.P.I.D.T.A.” (Which an acronym for “All Praise Is Due To Allah”) is a somber song that talks about the loss of love ones. Before I listened to this song I heard people saying that they shed a tear on their first listen. I thought they were being dramatic, but when Jay-Z says “I got numbers in my phone that’ll never ring again,” I felt that shit.

The melancholy feeling on the track is projected mainly due to sampling Khruangbin’s “A Hymn” but also through the hushed tones paces of the rappers’ voices. Jay Electronica joins in:

Sometimes I wonder do the trees get sad when they see leaves fell
Sleep well
The last time that I kissed you, you felt cold but you looked peaceful
I read our message thread when I get low and need a refill
Sleep well

The album ends on the somber highlight but it’s still a highlight.

And that’s the end of A Written Testimony.

As stated in the review, I glad that Jay Electronica stuck to his guns on his debut album. I was worried that we’d get a made for radio song with a Ty Dolla $ign feature or something. While “Act 1: Eternal Sunshine (The Pledge”) came out all the way back in 2007, A Written Testimony feels like a worthy progression. You still hear the trademark Jay Elect production as well as the thoughtful lyrics that made the world take notice.

Speaking of production, I’m sad that we didn’t get any Just Blaze contribution on this album. He was an early collaborator with Jay Electronica as well as the producer of “Exhibit A” and “Exhibit C.” That would have been epic.

What we did get is a lot of Jay-Z on this album. I heard some call this version of Jigga “Woke Jay-Z” or “5% Jay-Z” but I’m just happy we got him. Was it cheating by Jay Electronica to have arguably the best rapper alive on his first album to trade bars with? Of course, but it’s a trick you have to use if it’s available to you. Some critics have even said that Hov outclassed and out rapped Jay Elect on his own album (Most notable Joe Budden). I don’t think that is true but I can see how people could think that. Jay-Z rhymes are mostly effortlessly on this project but Jay Electronica holds his own for the most part on A Written Testimony.

While listening to this project, I was thinking maybe I’m just happy to hear a Jay Electronica album and that clouded my judgment. Maybe. But to me, A Written Testimony was worth the wait. If you are a Jay Electronica fan that was waiting for the day he released this project, you will probably be happy with the results. Plus, you get the bonus of it being a Jay-Z joint album. All praise.