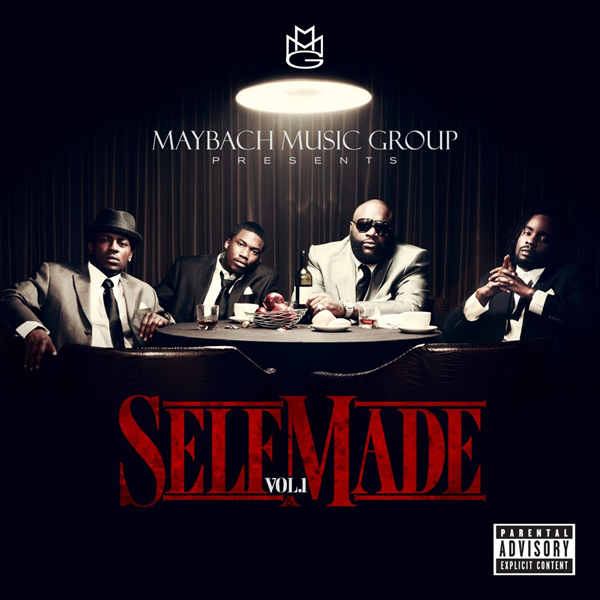 When Rick Ross put together the team of Pill, Meek Mill, Wale, Triple C’s, Stalley, and Teedra Moses…some people looked at the big homie sideways. Now that they have seen the vision and heard a few singles off the label’s compilation album Self Made Vol. 1, they see what he was trying to do over there. One thing you have to love about MMG is that they drop music/videos whenever they like. Remember Maybach Music Week? They gave you a new song just about every day, AND the music was HOT! We all know that Ross is a good player, but how is he managing his own team? Let’s find out!

Self Made
Performed by Wale, Meek Mill, Pill, Rick Ross & Teedra Moses; Produced by Just Blaze
The album starts off with some DOPE production by Just Blaze and Wale came out the gate swinging. Ross picks beats better than ANYONE in the game and that consistently helps him and his squad. Everybody on the team made a contribution on this track and it got you hype for the rest of the album.

Tupac Back
Performed by Meek Mill & Rick Ross; Produced by Mike Will Eardrummers
One of the first songs released off the album that has the streets going bananas! I can’t front..I don’t know what he meant by “Tupac Back” but I say it all the time when I’m playing the game or when I walk in the door when I come home. Ross is making 2Pac relevant again.

600 Benz
Performed by Wale, Rick Ross, & Jadakiss; Produced by Cardiak
The person that has the most to gain from this partnership is Wale and he is making the most out of it too. I would have never heard Wale over a track like this. Now that he is with Rozay…you get these D-Boy anthems with Wale and Jadakiss on them that have you nodding your head.

Pacman
Performed by Rick Ross & Pill; Produced by Young Shun & DJ Spinz
This is the song that the streets will LOVE! I mean how can you go wrong with Pill and Rozay on a track talking that dope shit? You can’t. This song goes EXTRA HARD! Listen to this at ignorant levels!

By Any Means
Performed by Rick Ross, Meek Mill, Wale & Pill; Produced by Lil’ Lody
Ross continue to give us dope production that makes it EASY for Meek, Wale, and Pill to rap over. Nothing deep here..just street cats giving you STREET music. If you looking for that deep stuff…you better go wait on that Nas and Common album.

Fitted Cap
Performed by Wale, Meek Mill, Rick Ross & J. Cole; Produced by Raz (of Beat Billionaire)
This might be my favorite song on the album. “My Jordans high top snap back fitted cap” is the hook, but this is ultimate D-Boy music. This song makes you want to go to the mall and jump fresh! Oh..the homie J. Cole KILLED IT!

Rise
Performed by Pill, Wale, Teedra Moses, Curren$y & Cyhi Da Prynce; Produced by Cardiak
Time to grab the LOUD and smoke to this one. This isn’t a smoker song, it’s just so smooth that you might want to ride and smoke while you listening to this one. The boy Curren$y did his thing on the hook and that complimented the track pretty well.

That Way
Performed by Wale, Rick Ross, & Jeremih; Performed by Lex Luger
I love the beat on this one…I just don’t like Jeremih’s singing on this track. He sounds like a girl to keep it 100. I’m not mad at Ross for this one, you can’t have an album driven off testosterone alone, you have to smooth it out at some point. This was it.

I’m A Boss
Performed by Meek Mill & Rick Ross; Performed by Jahlil Beats
Back to the streets..and Meek Mill dropped my favorite verse I have ever heard him spit. This is the kind of music that I want to hear from Ross and the squad. This song fits the whole image they are trying to get across. DOPE.

Don’t Let Me Go
Performed by Pill & Gunplay; Performed by The Inkredibles
This is another one that will have the street dudes pressing repeat on. Only the real will feel this. If you ain’t real…don’t even bother with this album. Pill carried the song and Gunplay did his thing on the track too.

Pandemonium
Performed by Wale, Meek Mill, & Rick Ross; Performed by The Inkredibles
This is another one of my favorites on the album strictly off the production alone. It doesn’t hurt to have one of the best doing it rapping over the beat either. The production is commanding and Ross takes the beat by the horns and delivers. WHOOP! Meek Mill really is showing why he was picked as one of the freshman for 2011. I’m impressed by the young cat from Philly.

Play Your Part
Performed by Rick Ross, Meek Mill, Wale & D.A. from Chester French; Produced by The Inkredibles
This was on Ashes 2 Ashes and it was so good that they decided to put it on the album. I can’t be mad at that at all. Ross has the midas touch right now.

Ridin’ On Dat Pole
Performed by Pill; Produced by Raz (of Beat Billionaire)
Do we have a strip club song from MMG? Why yes we do! I mean Pill is from Atlanta and we know how serious they are about their strip club game.

Big Bank
Performed by Pill, Meek Mill, Torch, Rick Ross & French Montana; Produced by Young Shun & Lex Luger
“Big bank take lil bank,/drop a  X pill in the fish tank/got the sharks on leeeean” I have no idea what that means, but it makes me laugh. This song must be played at ignorant levels also.

Running Rebels
Performed by Wale, Meek Mill, Stalley & Teedra Moses; Produced by Tone P.
Last track off the album and the good production doesn’t stop! On this one the team shows how strong they are without the Boss on this one and it still makes for a good song. They got a SOLID squad over there and it shows that they can do it with him chilling in the owners box.