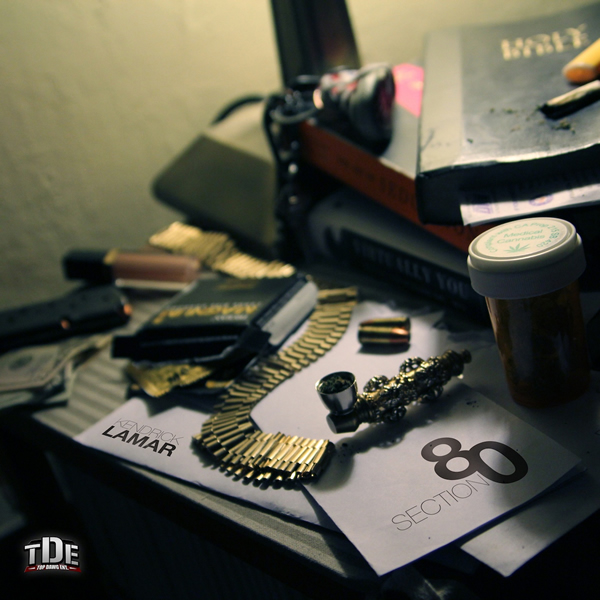 While most of us were waiting on Dr. Dre to release Detox, a change was happening for West Coast Hip-Hop. In the past fews years, new artists such as Odd Future, Dom Kennedy, Jay Rock, & Nipsey Hussle have lead the New West movement. One rapper who has a valid claim to being on the cusp of that movement is Kendrick Lamar (He even received a cosign from the aforementioned Doctor).

After releasing last year’s critically acclaimed mixtape O(verly) D(edicated), the artist formally known as K.Dot returns with Section.80 (The title of the album combines the decade Kendrick Lamar was born as well as the Section 8 Program). Will this release further prove that the Compton MC is the real deal? Let’s find out…

1. Fuck Your Ethnicity
Produced by THC
Kendrick makes sure that he connects with his fan regardless of race. He also addresses other things like his status as a rapper and how true his words are:

Matter of fact, don’t mistake me
For no fucking rapper
They sit backstage and hide
Behind the fucking cameras
I mosh pit
Had a microphone and I tossed it
Had a brain, then I lost it
I’m out of my mind, so don’t
You mind how much the cost is
Penny for my thoughts
Everybody, please hold up your wallets

He also foreshadows songs in the album (You’ll hear more about Keisha & Tammy later). Great intro not only for the album but to people new to Kendrick Lamar’s music.

2. Hol’ Up
Produced by Sounwave
Even though “Hol’ Up” is less than three minutes, it’s probably my favorite track on Section.80. The horns used by producer Sounwave helps creates the feel of the tracks as well as match Lamar’s lyrics (“Just bury me with 20 bitches/20 million, and a Comptown fitted”). It almost sounds like something Curren$y would jump on but this is definitely a Kendrick Lamar song.

3. A.D.H.D.
Produced by Sounwave
Here Kendrick Lamar talks the about the increasing over medication of his generation. It’s pretty intricate as he just doesn’t say these things but it shown through his interaction with a girl constantly looking for the next high. More points because Kendrick supposedly doesn’t even smoke weed.

4. No Make-Up (Her Vice)
Featuring Colin Monroe; Produced by Sounwave
Lamar gets helps from Colin Monroe to explain to ladies that their smile is beautiful without the makeup. Now, it’s been songs like this made before but Kendrick adds his own twists. On the second verse, a girl partially raps the track to explain the reason for the eyeliner and lipstick. As for the ending? We’ll see that on track 11.

5. Tammy’s Song (Her Evils)
Produced by THC
Here we here the story of women putting their love and trust in men but only to get lies and cheating. So much in fact that they turn to other women instead. It’s not a long song, not even three minutes, but the point gets across. Some people may be put off by the spacey beat though.

6. Chapter Six
Produced by Tommy Black
This is basically an interlude for the “Ronald Reagan Era”. It has Kendrick singing about having fun with his friends and hoping to make it to the age 21. Real mellow.

7. Ronald Reagan Era
Featuring RZA; Produced by Tae Beast
Lamar once again gives up artful description of Compton and the way the city was left after the 80’s after the crack epidemic (aka The “Ronald Reagan Era”). The heavy drums on the beat gives Lamar room to go off:

I tell you motherfuckers that life is full of hydraulics
Up down, get a 64, better know how to drive it
I’m driving on E with no license or registration
Heart racing, racing past Johnny because he’s racist
1987, the children of Ronald Reagan raked the leaves off
Your front porch with a machine blowtorch

If your having a hard time finding RZA on the song, he only says the “California dungeons” line (Yea, he got featured on the artwork for that too).

8. Poe Mans Dreams (His Vice)
Featuring GLC; Produced by Willie B
This track could be taken as a dedication to Kendrick’s father and institutionalized uncles and wanting them live well (“Smoke good, eat good”). I’m usually not really a GLC fan but his appearance is put to good use here as he does only the bridge and the talking at the end. The track goes with the lyrics as it’s light and gives a since of hope (Ad yea, there is a some “Top Billin'” in there too).

9. The Spiteful Chant
Featuring Schoolboy Q; Produced by Sounwave & Dave Free
A perfect title for this song because for most of it is actually a chant (“Too many niggas, and not enough hoes/And most of you niggas, acting like hoes”). It isn’t until the second and third verse where the rapping starts and they deal with backstabbing people. Lamar’s Black Hippy homie Schoolboy Q gets some shine towers the end. The horns really help this songs come alive. I can see this one being a theme song to my future disagreements.

10. Chapter Ten
Produced by THC
Same as “Chapter Six” but with an uptempo beat. Kendrick kicks a few quick bars buts it’s basically an intro for “Keisha’s Song (Her Pain)”.

11. Keisha’s Song (Her Pain)
Produced by Ashtro Bot; Produced by Tae Beast
Lamar gives a detail description of Keisha’s pain which is her dealing with being a prostitute and the dangers and evils that comes with that. At the end of the song, Kendrick says that he basically wrote this song for his 11 year old sister. And after listening to this song you’ll understand why it wouldn’t hurt for and young girl to hear this.

12. Rigamortus
Produced by Willie B
Over crazy horns and bass, Kendrick Lamar goes on a killing spree hunting for your favorite rappers and uses rapid fire to do so:

Just buckle up before the ride
Or knuckle up if you could fight
We always making them duck or die
A suit and tie is suitable and usual in suicide
CSI, just might investigate
This fucking parasite

13. Kush & Corinthians
Produced by Wyldfyer
This may be sacrilegious, but this song has an Outkast feel to it. It’s another introspective song and deals with the warring sides of a person. It also once again shows Kendrick ability to paint a picture with few words (Here sitting in the back seat of a impending drive by).

It go 1, 2, 3
Two in the front
One in the back seat
Seat, seat, seat
Looking for a victim of an AK-47
100 round each, each, each
But why must we retaliate?
Is it human nature?
I don’t know
I look for the answers later
Make a right, there they go!
Some times gotta

The addition of BJ The Chicago Kid finishes off the track nicely. Great production here provided by Wyldfyer who also produced songs like “Black Republican” (Nas feat. Jay-Z) & “I Do It For Hip Hop” (Ludacris feat. Jay-Z & Nas).

14. Blow My High (Members Only)
Produced by Tommy Black
On this track we have a weird combination of Pimp C lyrics (From “Big Pimpin'” to be exact) with an interpretation of Aaliyah “4 Page Letter” that then turns into a Aaliyah (“RIP Aaliyah … RIP”). I’m not complaining because the end result comes out great. I guess Drake’s not the only rapper showing love to Baby Girl lately.

15. Ab-Soul’s Outro
Produced by Terrace Martin
Lamar lets his homie Ab-Soul gets some shine over Terrace Martin live instrumentation. Basically Ab-Soul summarizes the subjects Kendrick lamar covered on Section.80 (“Section.80’s babies, blame Ronald Reagan, we raising hell”) You may spot some uses of Tupac’s “Life Is Trafiic Jam” too. The ending of the song also serves as an outro and revisits elements from “Fuck Your Ethnicity” (Track 1) .

16. HiiiPower
Produced by J. Cole
The lead single off Section.80. J. Cole not only gave Kendrick a awesome beat, but maybe his best beat ever. The song talks about the meaning of Lamar’s HiiiPower movement (The three i’s stand for Heart, Honor, and Respect and relate to how people should carry themselves). The first lines brings listeners in immediately:

Visions of Martin Luther staring at me
Malcolm X put a hex on my future, someone catch me
I’m falling victim to a revolutionary song
The Serengeti’s clone
Back to put you backstabbers back on your spinal bone.

Seeing that the last song felt like an outro, I don’t know why it was decided to end the album with “HiiiPower”. Odd ending but still a great song.

Bottom Line:
When I first got the assignment of reviewing Section.80, I knew about Kendrick Lamar but wasn’t necessary a fan. After listening to this album, I can say I’m a fan now. One thing this album shows well is that there is a lot to Kendrick Lamar. He not only is he a great rapper but a rapper that has a lot to say and has the ability to articulate those ideas. I spoke about the New West Coast movement in the intro of this review but this shouldn’t be just categorized as good music coming out of West but just good music period; Section.80 is a definite “Album of the Year” contender. A great introduction for listeners curious about Kendrick Lamar or anybody that wants to hear good Hip-Hop.