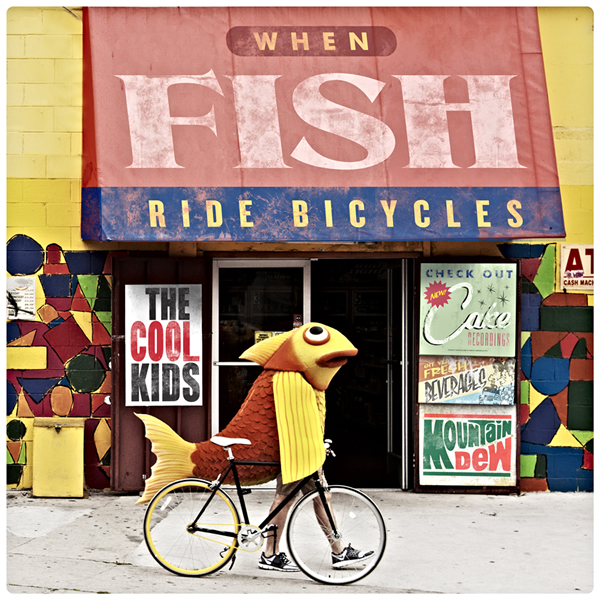 I’ve personally been a fan of these guys for awhile now. I’ve always thought Sir Michael Rocks (Mikey to y’all) and Chuck Inglish were talented cats. They met back in 2005, they released most of their songs for free on Myspace (remember “My_”?). They both rap and Chuck did all their beats, at least at first. They did shows, they released some mixtapes, an EP and some more mixtapes. They promised us this album here would be out back in 2008. It didn’t happen for label reasons.

But y’know…I never understood was why they didn’t go harder to be in the spotlight. I actually never thought I’d never see this album.

At this point, a lot of y’all might not even know who they are cause it took ’em 6 yrs to release a “real” album.

But they seem to have fun with what they do. Just go watch some interviews to see what I mean. They don’t care if they make it huge, they don’t care who likes ’em or hates ’em, and for that I can’t complain. If they had to sacrifice the glitter and bigger fame for having more normal lives and enjoying making music, then I can’t knock them.

So the album is finally here, lets check it out and see if it was worth all those years of waiting (All tracks produced by Chuck Inglish unless stated otherwise):

1. Rush Hour Traffic
Right off this one comes out bangin’ the speakers. This is a great intro track, and it definitely sounds like the Kids kinda stuff, think “Pump Up The Volume” or “88” from The Bake Sale. Its a good start-off with a dope chorus:

This is for them Regals, Granddaddy’s Cutlass’s
Lincoln Town vehicles, the speakers gon’ love it
The trucks is all low, like I talked about its Mother
Drive around slow like its an accident or somethin’…

I dig this one and its a keeper, if only for the beat and chorus

2. GMC
This ones got a great beat too, and the song is really good….until the chorus. Chuck does something there I don’t like and it makes the chorus kinda messy.
But this still has some great lyrics:

They’re mostly talkin’ shit and throwing out old school references (I’m older than these guys and sometimes I have NO idea what they’re referencing. How do they know this stuff?). With a different chorus (or even just without the loud synth sound. they actually drop it at the end and if they’d kept it like that the whole song, It’d be much better) this one would be a winner. As it is, its just kinda hot, but def not a skip.

3. Boomin
Featuring Tennille
I cant lie, I don’t dig this track. The lyrics are fine, but the beat is lackluster, Chuck brings back that “synth sound” I didn’t like on the last track, and Tennille doesn’t really fit the song to me (Sorry sweetheart). I hate to say it, but if I’m playing this one in the whip… this is a SKIP

4. Sour Apples
Featuring & Produced by Travis Barker
This one took me awhile to vibe with. I’m really not a fan of Travis Barker’s beats. I feel like since he was a Rock/Punk dude so long, that his beats never sound quite right (kinda “like a whiteboy sayin’ nigga”, shout out to The Forums). Its actually not too bad until the chorus, the beat is pretty basic and boomin’, lyrics are good….but then the chorus comes in and the whole thing just sounds messy. Not a total SKIP, but close. Travis should just stick to drumming (He even does some towards the end). He’s great at that. But beats? Not so much.

5. Penny Hardaway
Featuring Ghostface Killah
I’m not really a fan of this beat either. Chuck sampled an orchestra or something and again it’s too much. I think he was trying to make an epic sounding beat for Ghostface, which I cant blame him for. But as always, ‘Face does do his thing:

They shootin’ stars, these ruthless bars
Got white girls holding they mouth like “OH MY GAWD!”
No he di’innt, give him a bib cause he keep spittin’
Lines thats so cold, where every words frostbitten

This one is worth hearing for the Ghostface cameo and a few of the Kids lines about old clothes that I don’t even remember. But I don’t think this will get constant spins.

6. Bundle Up
This one has a good beat that sounds like Chucky sampled some troops marching. And as always, they spit some funny lines:

[Mikey]
You got designs on the back of ya jeans/ man they steam and I’m cold as a Lean Cuisine
Comin’ fresh out the freezer, I’m clean to the Ceaser/ the only 3rd Grader in the school with a beeper
Clipped to the seams, front pocket of the Wranglers/ my Teacher took if from it, it was funny how she snatched it…

The chorus is basic, just telling you to “bundle up” cause its cold where they come from. But with a nice beat, nice chorus and verses, this one is a winner.

7. Gas Station
Featuring Bun B
This was the one I was most looking forward to when I wrote an article about this album earlier. Its known around here that I’m a Bun “Stan” and after hearing the dope “Pennies (remix)” featuring Ludacris & Bun B last year, I was REALLY lookin’ forward to this one. So how did I like it?

Well…I like the beat, I love the chorus (Which is just someone singing “bah-bah-bah-bah’buddammn-bah-baaahhhhh” which Okayplayer described as “Nate Dogg-ish” and I’d say that about right) and the Kids do their thing well. But what I didn’t like was…Bun.

I KNOW…I was surprised too. He just doesn’t sound comfortable on this beat at first and by the time he DOES start to go at it, his verse is over.

So if you kinda excuse Bun’s weird appearance at the front, then this song is real smoove and it’s a rider for sure. You’re GONNA be singin’ the chorus, trust.

8. Get Right
Produced by The Neptunes
Here’s the first of two Neptunes appearances. And I do not like it. It sounds like a throwaway beat, the chorus gets even worse….I dunno, maybe some will like this.
I see what they were trying to do, but it comes off much better later. Their other appearance is really ill….For me, this is a SKIP

9. Swimsuits
Featuring Mayer Hawthorne
This was their first single, and I can see why. The beat is really dope (If you can ignore the “Go” jerkin’-ish sample) and you can tell Chuck had fun crafting this one.
The lyrics are straight, with good verses, but the right highlight is Mr. Mayer Hawthorne (Who me, B-Easy and others on here are already fans of). He really lifts this one up to a different level and makes me excited to hear him over this kinda beats in the future. He might overtake Mr.Hudson as the most soulful cracker if he keeps doin’ stuff like this.

This is NOT a SKIP

Also on this track are 3 of the newer emcees currently in the game.

With an old-school sing-along chorus (That actually reminds me of Ed Lover and Dr.Dre’s HOT 97 Roll Call from back in the day), this one will appeal to old-heads as well as the new school. It’s got something for everyone. The Cool Kids do their thing, Chip and Boldy do their thing, but to me Asher (As he often does) shines the brightest on this track cause it sounds like something he’d normally rap over. I’d write out his verse here, but I think you should just go listen, cause I can’t imagine anyone not liking this track.

Shout out to the Weeds reference too, that made me smile. Also, shout out to Chuck saying “wellness” instead of “health”. It’s the little things like that, that I dig heavy tough.

11. Summer Jam
Featuring Maxine Ashley; Produced by Pharrell Williams
When this came on, I gotta say, I was skeptical. This does NOT sound like the kind of beat The Cool Kids usually rhyme over.

But after a few spins, this MIGHT be the best track on the album. Chuck and Mikey serve up some simple, but effective summertime lyrics:

[Mikey]
And I got a lot on my plate/ but I can make some time for you if you wanna escape, its OK
By the poolside is where we should lay/ you gotta lose your inhibition and get carried away

The things that really make this one a winner are the beat (Pharrell did a great job making a beat that sounds like summer. I even love the strange gibberish sample he used)
and Maxine Ashey. She made this sound like sunshine and flip-flops. Our homie Saule should really look into this songstress for us, cause I’d love to hear more of her voice.

nappyPicks: The last 3 tracks. I dunno if they meant to put the best tracks at the end, but thats how it ended up as I see it.
Maybe “Gas Station” too, just skip Bun’s verse *sigh*

Bottom Line:
I was looking forward to this and had hopes that every song was a banger, but as it turned out, it’s real hit and miss. I only like about half the album to be honest.

I think its because these guys are young (Chuck in his mid 20’s, Mikey a few years younger) and they dont really know who they are yet, so they experiment too much and it just doesn’t always work. A reviewer for Sound In The Signals Magazine said of their last mixtape:

When I listen to this mixtape I do feel that it lacks some things The Bake Sale had, and I miss those things, but in many ways I see new ideas developing and coming to fruition that make this group an undeniable force in hip hop. Nobody wants to hear the same thing twice and if there are hundreds of copycat groups, the best way to combat that is staying creative and I definitely won’t take down a group for experimenting with ideas and trying to create a unique product.

That’s pretty much how I feel about When Fish Ride Bicycles. I can’t hate on them for trying new things because sometimes it works (see “Roll Call” and “Summer Jam”) but when it doesn’t work, it really doesn’t work for me. I’m still a fan, I’m just hoping the next album is a fully realized idea as a whole, they figure out exactly what works for them and its not so much this-n-that like this one. But the tracks that DO work, you’re gonna love, trust me.

I wish I could give them a higher score. But as I only liked about half the album, they get a halfway score of: