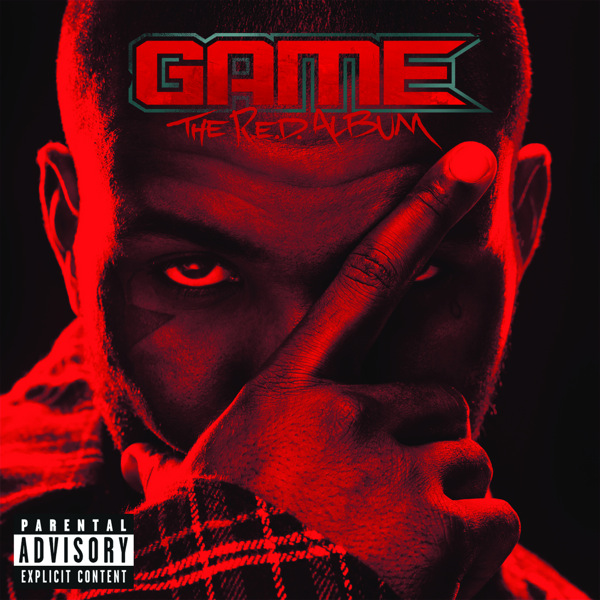 It’s been over five years since Game and Dr. Dre have been linked together. Game departed from Aftermath records when he dropped the Doctor’s Advocate in 2006 through Geffen records. The album was good but didn’t reach the success he had with The Documentary. Two year later, he released L.A.X. and it certainly looked like Game was nowhere near his peak, and maybe he should get back to recording with Dre. Well now it’s 2011, and Game has finally returned to Aftermath records. There might not be any Dre beats, but Aftermath certainly hooked him up with some top-notch producers. Now that Game has wised up, will he return to the success he once had with Aftermath or is it too little too late?

1. Dr. Dre Intro
Dre starts The R.E.D. Album with a short interlude about being born in Compton.

2. The City
Featuring Kendrick Lamar; Produced by Cool & Dre
Cool & Dre do a great job making the beat standout with a sample that gives the track a LA state of mind. Game clears up a few questions about his return to Aftermath while also naming himself a top 5 rapper of all time. Game does a good job on his verses, but Kendrick Lamar steals the show. K Dot’s verse was too long that Game cut the first 8 bars into the hook, and made the last 16 bars the final verse:

This is me, Kendrick
And I wear pendant on my shoulder, soldier
Like a lieutenant, and the coupe tinted got pulled over
Johnny always lock a nigga down
Knowing damn well we don’t wanna see the box like Manny Pacquiao
Little nigga Mayweather size, ride like Pac
In his prime, thug life is now on radar
Til the federal come through and raid ours
Reminiscing when the LA Raiders
Was in my home, snapback fitted on my uncle’s dome
And I don’t condone dickriding, I’m addicted to
Westsiding, living in a city where the skinny niggas die
And the semi bullets fly, but it turn me to a lion
Trying (trying), and I mean that shit
Game came through, put the city on his back
I was in the city with a nigga, had seen that shit
“Compton!”, a nigga gotta scream that shit
Never went commercial, never T.V. screened that shit
Can’t block or screen that shit, now everybody sing that shit

3. Drug Test
Featuring Dr. Dre, Snoop Dogg, & Sly; Produced by DJ Khalil
This is the latest single off the album. I’ll have to be honest; I wasn’t expecting the best verses, but this beat is nothing new. Sounds like Khalil took the drums from Dre. The hook gets repetitive and sounds generic too. Plus, Snoop isn’t really featured; you hear a recycled verse on the chorus. This is a very average track for me.

4. Martians vs. Goblins
Featuring Lil’ Wayne & Tyler The Creator; Produced by Larrance Dopson, Brody, & Mars
We have Lil’ Wayne (the Martian) and Tyler (the Goblin) here. The only problem… Wayne is only on the hook. Game and Tyler rhyme in their name-dropping form (Even when Tyler goes at Game for it). Lyrically, this could’ve been better, but still not bad.

5. Red Nation
Featuring Lil’ Wayne; Produced by Cool & Dre
This is the controversy single that had the video banned from MTV & BET (surprised?). Wayne and Game ride out to the Zombie Nation sample as they rhyme about their gang affiliation with the Bloods. I’m not the biggest Weezy fan, but he should’ve had verses on the last two songs. Still a standout for me though.

6. Dr. Dre 1
This is another short interlude about growing up in Compton. Here, Dre talks about Game watching Boyz N the Hood for the first time and how much it influenced him.

7. Good Girls Gone Bad
Featuring Drake; Produced by Cool & Dre
This song is dedicated to Game’s parents. He tells a story about how abusive his father used to be towards his mother. Drake gets on next, and rhymes about a girl he used to love and why he likes good girls over bad girls. I’ll be the first to say Drake is overrated, but he drops a hot verse here. Game’s third verse is okay, it sounds similar to Drake’s style and doesn’t really go along with the first verse.

8. Ricky
Produced by DJ Khalil
This track is about the scene in Boyz N the Hood where Ricky gets murdered. Game keeps the same mentality as he rhymes about the crime in Compton. Game goes deep on the track from when he was shot to when his brother was killed. DJ Khalil samples the scene from the movie, and fits it in perfect with the song’s theme. This is one of the deepest songs on the album and supposedly Game freestyled the whole thing.

9. The Good, The Bad, The Ugly
Produced by Hit-Boy
Game keeps his storytelling form as he rhymes about a time when he was brought in by the police for questioning. Game does a creative job by telling us the story as if he’s telling it to the LAPD. In the end, I basically get the idea that he’s not snitching.

Beef, I cook it fully with the fifth
And I ain’t got no pets, I put a bullet in ya bitch
A nigga with a gun in his hand who won’t bust it?
Like a bitch with a dick in her hand who won’t suck it

11. Paramedics
Featuring Young Jeezy; Produced by Maestro
I’m a little confused with this track. Jeezy spits the first verse and Game spits the next two verses. However, Game sounds exactly like Jeezy. Not only did he find a way to make his voice raspy like Jeezy, but also managed to jack his style too. It still came off good though.

12. Speakers On Blast
Featuring Big Boi & E-40; Produced by Mars
Game wanted a track for the whip so he got Big Boi & E-40 here. I’m really starting to like most guest features on the album. Big Boi & E-40 were the perfect choices for a track like this. I really like E-40’s verse, but I’d say Big Boi took this one:

My mojo is never fadin’, I’m in my Optimus Prime transform
Switch it up, heat it up, speed it up, that means I’m gone
Light years, ahead of your Buzz, Toy Story and club songs
Boy, gone, the A-T-L-iens are phoning home
But I feel like a librarian, cause style’s are being’ loaned out like books
A castle full of crooks, rape and pillage
They’ll do anything for money, I bet misleading the village

13. Hello
Featuring Lloyd; Produced by Brody, Larrance Dopson, & Mars
The R.E.D. Album takes a different turn on the slowed down “Hello”. Game makes a track for the ladies as he rhymes about his queen. Lloyd handles the chorus. This is not a bad track, but doesn’t fit the album’s concept at all.

14. All The Way Gone
Featuring Mario & Wale; Produced by Don Cannon & Mars
We got another track for women. Mario is on the hook and Wale does a verse. Wale’s verse is decent, but Game really came weak on his. Haven’t heard Mario for a minute, but it sounds like he hasn’t lost his step. This is not bad, but doesn’t stand out.

15. Pot Of Gold
Featuring Chris Brown; Produced by The Futuristics
We have Chris Brown on the hook talking about how life is so hard. Game is on his average shit behind the mic. I don’t understand how you going to name your record The R.E.D. Album then come with three weak R&B tracks in a row.

16. Dr. Dre 2
Dre speaks on how Game decided to be a Blood rather than a Crip.

17. All I Know
Featuring LuBreez; Produced by Boi-1da
Boi-1da delivers a beat that sounds like the album is coming to a close. Lu Breeze does an average job on the hook. To me it sounds like it was already done before. Here, Game rhymes a little more freely without having to worry about a concept.

18. Born In The Trap
Produced by DJ Premier
Yes, you’ve read right, Premo finally produced a track for Game. It’s definitely not the same Premo from the early 90’s, but the beat still bangs. Game takes Nas’ rhyme pattern to construct a song about being born in the trap. There really isn’t any concept here, but it feels like Game has really matured:

I used to run around like you, run the town like you
Walk my red nose and clown like you
But it got old like Betty White
This rap shit real deep like Barry White
Reminiscing on the days I used to carry white
Walking though them Crip hoods in the Cherry Nikes
Now I live a married life, walking in the house, to them home-cooked meals
Joint American Express accounts and less dollar bills

19. Mama Knows
Featuring Nelly Furtado; Produced by Pharrell Williams
This song is dedicated to Game’s mother. Pharrell Williams gives the song a real easy listening feel with a smooth laid-back beat. Some people are disappointed that Nelly Furtado is on the hook, but I have no problem with it. The chorus is not overdone and it goes along with Game’s personal lyrics.

20. California Dream
Produced by Mars
This is Game’s ode to his newborn daughter, California Dream Taylor. This song is very similar to “Like Father, Like Son”. However, Game takes us through his thoughts and feelings on the day his daughter was born. You don’t get many Hip-Hop songs this creative and original. This is one of my favorite tracks.

21. Dr. Dre Outro
Dre ends the album on how Game kept it gangster off the streets.

Bottom Line:
I didn’t know what to expect from Game before hearing this album. One minute he’s dropping heat, the other minute he’s dropping names for attention. All in all, I’ll have to say that I’m pleased with The R.E.D. Album. The name calling wasn’t bad and he got back to making those West Coast classics. I would’ve given the album a higher score, but I’m not feeling those R&B tracks. To me, I feel like they fucked up the album’s whole vibe. Some of the production was so-so, but for the most part the beats were nice. The guest features did their thing as well. For the next album, I’m asking for more beats by Dr. Dre. The narration was cool, but that’s just not enough from one of the best producers of all time.