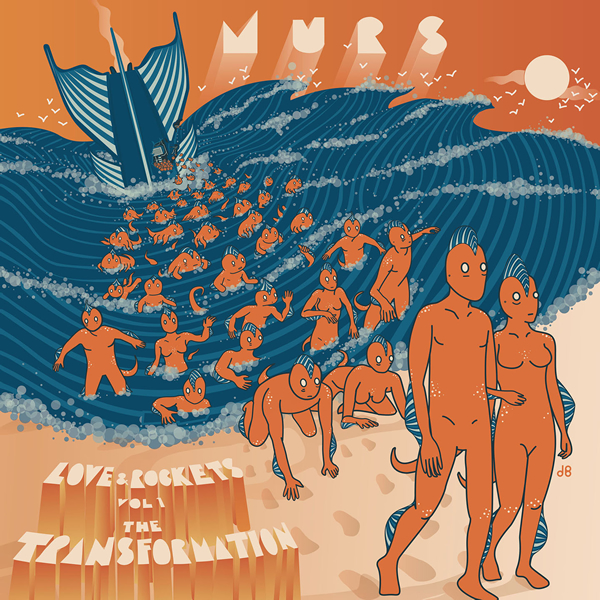 During his 15 year career, Murs has created a eclectic catalog that includes his work with the Living Legends, 3 Melancholy Gypsys, his Felt projects with Slug, his 4 albums with 9th Wonder, and his solo albums that includes his try at the majors with Murs For President. Now he has hooked up with Dame Dash’s BluRoc Records to release his latest project, Love & Rockets, Volume 1: The Transformation. The album title marks a change in Murs in terms of business, looks, (He recently cut off the trademark dreads), and life (He recently got married). Also for Love & Rockets Volume 1, Murs has Ski Beatz handling 12 out of 13 of the tracks. Will this be a good transformation? Let’s find out

1. Epic Salutations
Produced by Ski Beatz
The opener of Love & Rockets Vol. 1 feels like it’s introducing the listeners to hearing Murs over Ski Beatz signature production. Actually, the laid back bass anchored beat sounds like something that would be on Pilot Talk, but Murs makes it his own as he uses rocket and space metaphors in his rhymes. This works as a pretty good intro for the album.

2. Remember 2 Forget
Produced by Ski Beatz
I always thought Murs was at his best when rapping about relationships with women and he shows why here. The basic theme of the song here is about reminiscing about past relationships but remembering that it wasn’t all good. The live instrumentation that Ski provides a good backdrop for Murs to talk about the failed relationship. You can even look at this song as the unofficial sequel to “Break Up (The OJ Song)”; Murs even makes note of it.

3. 67 Cutlass
Produced by Ski Beatz
Murs is in full storytelling mode here which is refreshing since it isn’t done very much in Hip-Hop these days. The set up here has Murs and a friend riding around in a Cutlass, smoking weed, and getting pulled over by the police. I’ll admit that the story here is predictable, but you can go back and listens to songs like “Trevor An’ Them” or “Walk Like A Man” and see that Murs may be one of the best rapping storytellers out.

4. Eazy-E
Produced by Ski Beatz
Murs has always been one to pay homage to his West coast Hip-Hop influences and here he does it again. The title of the song may be after Eric “Eazy-E” Wright, but the song pays respect to a lot of Left Coast legends:

Growing up they said the West had no lyricist
Can you imagine growing up hearing this?
So I took my Hip-Hop serious
Years later now the pen game is furious

As for the beat, I had to check the album credits again to make sure Ski Beatz actually produced this one; Ski definitely shows versatility here and makes something that matches the retrospective rhymes from Murs.

5. Hip Hop & Love
Featuring Tabi Bonney; Produced by Ski Beatz
I’ll be honest here, I didn’t like this track when I first heard it, but after seeing it performed at A3C this year, I kinda warmed up to it. It definitely one of those songs that has a chill vibe to it. There have been a lotta songs where Hip-Hop is personified as a woman but Tabi Bonney & Murs still do a good job of using the metaphor to show their history with the culture. This one may not be everyone’s pace, but give it a few plays.

6. International
Produced by Ski Beatz
On “International” we hear Murs talking about his travels around world and performing in different countries. On the production side, the horn takes the lead with the rest of the beat building off of it. The song is okay, but it can come of a bit boring since the previous song’s tempo is about the same. I could see it being good background music.

7. S-K-I-B-E-A-T-Z
Featuring Locksmith; Produced by Ski Beatz
You’d think that from the name that this song would be a tribute to the producer (Now that I think about, I guess that is tribute). The song is basically Murs going hard at MC’s and explaining why he does what he does. The songs reminds of Ski Beatz & Stalley’s “S.T.A.L.L.E.Y.”, but for some reason the hook here sounds awkward. 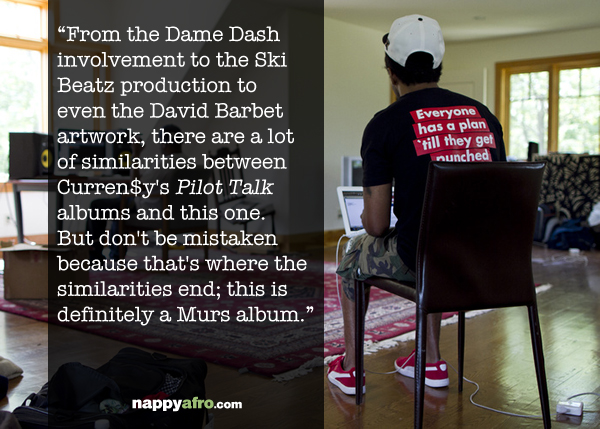 8. Westside Love
Produced by Ski Beatz
From the title I thought Murs was gonna show more love to the West Coast Hip-Hop. Well, he does but instead of rappers, this time he gives love to past women he’s met out on the West. Ski matches the mood with a West coast/G-Fuck sounding beat. The song does it’s job but Murs has covered the subject matter much better on previous tracks like “Freak These Tales”.

9. Life & Time
Featuring Ab-Soul & O.C.; Produced by Ski Beatz
While the combination of Murs, Black Hippy’s Ab-Soul, & Brooklyn veteran rapper O.C. may look weird on paper, it works well here. While every MC here turns in good performances while keeping on the subject of fake MC’s, some of the success of the track may be due to the horn heavy beat that sets the mood. This is one of the standout tracks on the album.

10. Reach Hire
Produced by Ski Beatz
Murs gives us some inspiration as he tells the story of his trails and eventual come up in the rap game. There’s a message here but “Reach Hire” sounds like an album track that wouldn’t have been missed if it was left off. It’s not bad but just nothing memorable.

11. Dream On
Featuring Dee-1; Produced by Ski Beatz
More inspiration rap here, but Murs gets Dee-1 to ride shotgun on this one. Other being from New Orleans, I didn’t know much about Dee-1 but his verse still made an impact:

Beside the fact that you don’t hear many rappers rhyme about marriage in a good light, the song deals with all dreams people have be it rap or just life. Real rap.

12. 316 Ways
Produced by Ski Beatz
On the first listen of this album, “316 Ways” was probably the first song off Love & Rockets Vol. 1 that drew me in. Maybe because it’s the amped up Murs that I usually like. Ski Beatz gives him an uptempo track for Murs to rock over and explain to rappers that he didn’t have to lose his soul to do well in the rap game:

And I never fired one shot
Ain’t no higher power than the one that I got
No napalm necessary, the rap game’s now a cemetery
And I’m dancin’ on your grave
You was born a free man, but died a industry slave
These 360 deals is craze
They call it 360 cause you trapped in a maze

One of the best tracks on the album.

13. Animal Style
Produced by Embassy The Hitmaker & Royal P
You remember on track 3 when I said that Murs may be one of the best rapping storytellers out? This song is more proof of that. Not many rappers would have the talent or guts to tackle the taboo subjects of homophobia, hate crimes, closeted denial, self hate, or teen suicide, but Murs does it with ease while given the topics much needed light. This is easily the most powerful song off this album if not of the whole 2011 and should be a highlight for Murs’ career (Ironically, Love & Rockets Vol. 1 came out Oct. 11th which is also National Coming Out Day). This is the only song on the album not produced by Ski Beatz but Embassy The Hitmaker & Royal P do a great job here.

Bottom Line:
Most of the time when Murs works on an album with one producer handling most of the beats, he turns out a cohesive album and Love & Rockets Volume 1 is one of those albums. When this album was announced, there was a lot of comparisons to Curren$y’s Pilot Talk albums. And to be honest, from the Dame Dash involvement to the Ski Beatz production to even the David Barbet album artwork, there are indeed a lot of similarities. But don’t be mistaken because that’s where the similarities end; this is definitely a Murs album. He still deals with subject matters most rappers don’t while using well placed lyrics to describe them. Ski also does a good job for the most part by given Murs a good soundscape and live instrumentation to display his talents.

There are some drawbacks here in terms of sequencing and tempo not to mention that Murs has done better work with producers like 9th Wonder. But this project is still one Murs should be proud of. And to think, Love & Rockets Vol. 1 is his first outing with Ski Beatz so there’s a good chance that their upcoming followup, Love & Rockets, Vol. 2: The Declaration, improves even more on the chemistry.