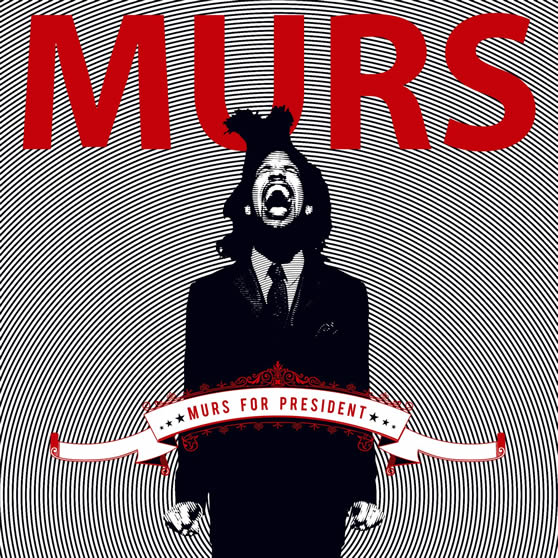 After years grinding it out as a mainstay on the independent scene, Murs returns with his 7th album (Or 20th, depending on who you ask). What makes this album different from previous outings? This album, Murs For President, officially marks Murs first trek into a bigger arena since this is his first album on a major label (Warner Bros.). After being a poster boy for Hip-Hop’s indie scene, a lot are wondering can the L.A. native make the successful transition. Well, as the name of his new album states, Murs is looking to lead the Hip-Hop nation and save it from senseless corruption. And like a certain presidential candidate from Chi-town, Murs is definitely looking for change.

1. Intro
Produced by Wild Animals
The intro has an obvious presidential theme as a reporter covers Murs on the campaign trail. It has a reporter asking him how he is going take his grass roots campaign to cover the “demands for the majority”. It’s actually a good metaphor for his indie to major move. His answer…

2. I’m Innocent
Produced by 9th Wonder
This track sounds like something straight off Murrays’ Revenge, and that’s not a bad thing. I always said that out of all the collaborative albums by 9th Wonder, the one with him and Murs are by far his best. Over a chopped up soul sample, Murs shows easily why he’s nice with the words; “You gotta move with urgency/Assert with certainty/Ask me if I’m set to serve I say certainly”. He even drops gems for long time fans of his past 9th Wonder produced albums. Nice way to start out.

3. Lookin’ Fly
Featuring will.i.am; Produced by Keith Harris & will.i.am
When this song starts out, I instantly recognize the sample as the Green Hornet’s theme (A lot of you may have heard it from Kill Bill). It reminds me a lot of what Needlz did with Nancy Sinatra’s “Bang Bang (My Baby Shot Me Down)” for Young Buck. Even though the song is not bad, I think will.i.am could have brought more to the beat (Kinda like what he did for Common or The Game). The hook sounds like it lacks something too. Like I said, it’s not a bad track and Murs doesn’t sound bad as he raps about looking fly. I guess you gotta do these things when dealing with the majors.

4. The Science
Produced by Scoop Deville
Here, Murs successfully breaks down the problems in Hip-Hop as well as within the Black community. He shows his intelligence as well as knowledge as he breaks down everything from “Freeway” Ricky Ross to welfare dependence to even the original position of the Hip-Hop DJ. There’s no hook, just Murs droppin’ science all the way through over a flute driven mid tempo beat. It’s funny; Murs knows more about the history of the drug trade than most dope boy rappers.

5. Can It Be (Half a Million Dollars and 18 Months Later)
Produced by Scoop Deville
I’m really surprised that Murs got sample clearance of the Jackson 5’s “I Wanna Be Where You Are” (Could that be the “Half a Million Dollars” in the title?). Since this is one of my favorite songs of all time, I guess I might be a little biased. Yeah, I’ve heard a few other rappers flip this sample on mixtapes, but Murs does it justice with lines like; “From the independent Hip-Hop scene/Now they talking like how I’m not a Hip-Hop fiend/Needle in my arm; can’t they see that I’m OD’n?/Never take the strips from this triple OG’n”.

6. Everything
Produced by LT Moe
Murs gets introspective on this as he relives his younger hardships as well choosing to stay true to himself. The production on the track has an inspiring feel and serves as a good backdrop. I’m trying to place the sample but don’t kill me if it doesn’t come to mind (It sounds like Bryan Adams but I know I’m wrong).

7. Road Is My Religion
Produced by Khalil
In the beginning of this song, Murs dedicates this song to anyone who has to make their money on the road; that’s exactly what the song is. Don’t get it twisted though, this is not about touring like Jay-Z or 50 Cent; this is about the indie circuit (Performing at small venues, forgetting to pay the cable bill, etc.). It’s not a subject most can relate to, but over a clap and bass beat heavy track, Murs lets us into this world.

8. Sooo Comfortable
Produced by Josef Leimberg
This is the first song I’m not feeling off the bat. I know that it’s you standard California-like beat, but I don’t think this sounds like Murs. I guess this is the “chill out” song. It’s basically a song about Murs in his comfort zone but to me it’s boring (Sounds like that’s Kokane on the hook too).

9. Time Is Now
Featuring Snoop Dogg & LaToiya Williams; Produced by Niggaracci
I probably would have taken a Little Brother or Living Legends feature instead of Snoop Dogg, but in the end the song turned out good. The production is not something you would hear on the Tha Eastsidaz or anything, its piano heavy and sounds well thought out. Murs doesn’t turn down the lyricism and well Snoop does…Snoop. The slept on LaToiya Williams as always is awesome.

10. Think You Know Me
Produced by Nottz
Even though I find the production here dull at first, Murs lyrics about preconceived notions brought me back. He takes the role of three different gangster looking individuals who are not what they appear; “I’m a felon, don’ mean that I’m stupid…/I probably gotta higher IQ than you/These jobs not hiring, what should I do?” This is a good concept track that gets its point across (The hook could have been better).

11. Me & This Jawn
Produced by Nottz
I think everybody will recognize the Isley Brothers sample here. Even though “For The Love Of You” has been heavily used, Nottz flips it in a way I’ve never heard. Here Murs shows one of his strengths in making songs about relationships (And not in the LL Cool J way either). The way Murs does it; it makes it relatable to both men and women while also being funny. The track as a whole has a feeling that makes you wanna go sit back and just ride (If you can find the gas). I been feeling this song since it was leaked a while ago.

12. Love and Appreciate II
Featuring Tyler Woods; Produced by 9th Wonder
9th and Murs hook up to make a sequel to a track that appeared on 2006’s Murray Revenge. I actually like this one over the original. Murs talks to the men who have a cold heart to females; “Can’t live with ‘em, can’t live without ‘em/But I love a whole lot more than I hate about ‘em/They look good, smell good, feel even better/So why you acting like you momma didn’t use that leather?” Yea, it had to be said.

13. A Part Of Me
Produced by Terrace Martin
Murs keeps with the relationship themed songs and goes into what happens when you let “the one” get away. The production, as well as Murs’ tone, all sound emotional and help convey the mood of feeling like you fucked up a good thing. It even has Murs yelling towards the end in foolish frustration; “Forget what I did on tour/I said I love you. You needed more/Why you tripping? You need to understand/Sometimes a man’s gotta be a man!” A lot of people say Murs is sometimes too silly to be taken seriously; this proves them wrong.

14. Break Up (The OJ Song)
Produced by Knotch
Yeah, it seems like Murs has a lot of relationship problems; the last four songs deal with them. When I saw the title, I thought he was gonna be in Eminem “Kim” mode (He only cashes in on the OJ title at the end of the song). Even though he treads on the subject extensively (remorseful breakups with girlfriends), Murs turns in a great song. What really stands out in the production by Knotch; the sample use is sick and makes this track my favorite off the album (I hope I didn’t already say that). This one is a winner and very (very) relatable.

15. Breakthrough
Produced by 9th Wonder
Murs ends the album the same way it began; with 9th Wonder. This track almost has the same structure as “I’m Innocent”. He touches on a lot subjects like never wearing gold fronts and working at Target or Best Buy if this album doesn’t sale. The production gives Murs For President a good note to end on.

Bottom Line:
If the question is still whether on not Murs made a good transition for independent to commercial; that will have to wait until the album sale numbers come out. If the question is did he produce a good album, the answer is a big yes. While Murs did incorporate more mainstream elements in the mix (Snoop, will.i.am, DJ Quik mixing the album), he didn’t lose himself in the process. Murs still comes across the same as before with witty and humorous rhymes about the everyday man. All in all, I’m just happy he has a bigger platform; one (most of the time) not usually given to underdogs in Hip-Hop. The jury is still out on whether or not the nation will cast their vote for Murs, but Murs For President shows that he runs a very good campaign. What up though?

nappyPicks: This album needs support. If you downloaded Sweet Lord, you basically agreed to support him on Murs For President.