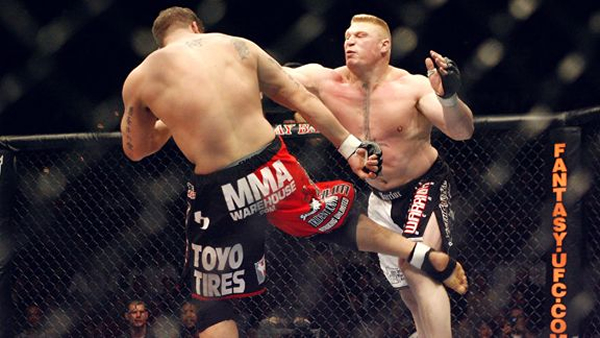 Although Brock Lesnar officially retired in December of 2011, I think there’s still more fight in him. There’s at least one more fight on his contract and a potential for possibly the biggest fight trilogy in UFC history.

In Brock’s UFC debut, he lost to Frank Mir by a knee bar and was furious at the referee for a questionable point deduction for striking Mir in the back of the head. This foul led to the fight being returned to the feet and possibly a change in the outcome. At the point of the foul, Brock was dominating Mir on the mat with powerful ‘ground and pound’ shots and was likely close to a technical knock out. The controversial call made by Steve Mazzagatti induced the fans’ uncertainty in his ability to referee a match. In most instances of strikes to the back of the head, the fighter is verbally warned. It didn’t appear that Steve gave Lesnar any warnings.

Their bout at UFC 81 led to a war of words that lasted over a year until they fought again at UFC 100 on July 11, 2009. Lesnar discredited Frank’s jiu-jitsu style while Frank mocked at Brock’s inability to defend it. Lesnar called Mir “a glorified Karate Kid” as Frank claimed to “enjoy poking at the bear”. Lesnar couldn’t wait to avenge his first and only loss and Frank wanted to silence any question of whether he could finish Brock without help from the official. When their next meeting was finally scheduled for UFC 100, it was to unify the UFC heavyweight championship. Brock had just won the belt against Randy Couture and Frank had won the interim title against Antonio Nogueira.

In their second fight, Brock turned Frank’s face into a bloody mess as he secured Mir’s head in his left arm and controlled his wrists. Brock continuously landed on Mir’s face with unbelievable power until Herb Dean was forced to stop the fight. It was not pretty and neither was their post fight confrontation. As Frank was being helped to his feet, Brock walked up to him and apparently yelled “talk all the shit you want now!”. He continued on to bash Frank on the microphone while also bashing one of the UFC’s primary advertisers and saying “I might even get on top of my wife tonight”. ‘Boo’s’ filled the stadium and Lesnar encouraged them. Brock is infamous for his post fight behavior at UFC 100 and has played the ‘bad guy’ ever since. He has many fans and possibly more who love to hate him. 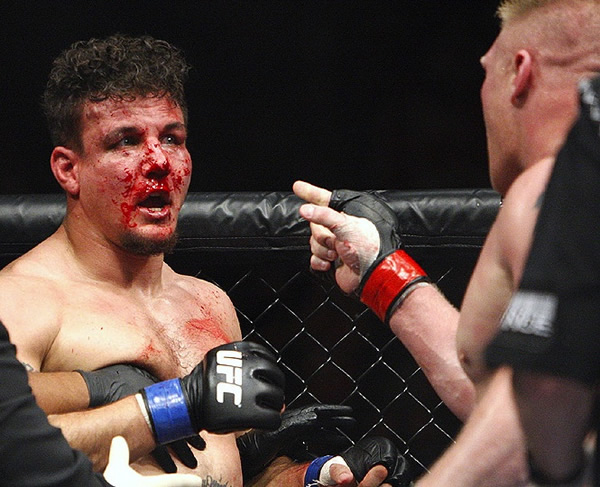 If Brock ever decides to return, he will have the perfect opportunity to take part in possibly the biggest event and maybe the biggest paycheck in MMA history while completing a trilogy with his rival. Frank would never pass up an opportunity like this and has stated the desire for a ‘rubber match’ in the past.

This is a great matchup specifically because they’ve fought twice before. Brock will be much more cautious of Frank’s submissions while Mir may avoid the ground completely. Mir knows how to beat Brock. Not only has he done it before but he’s seen Carwin come close and Velasquez and Overeem finish him. I don’t see either fighter making the same mistakes they made in their respective losses. For this reason I can imagine an unforgettable war that could be the perfect end to a great rivalry and a great career for Lesnar.

Despite Brock’s dominant performance in both previous meetings, I’d pick Mir in the finale. Mir should realize that Brock does have the wrestling ability, strength and size to smother him and most chances of a submission. Brock’s biggest weakness is his striking game and it’s been exposed in his last three fights. Frank’s striking skills have vastly improved since he joined the UFC and he possesses the speed and power to finish Brock. The only question is: Can he keep the fight standing? I believe it’s only a matter of time until we find out.