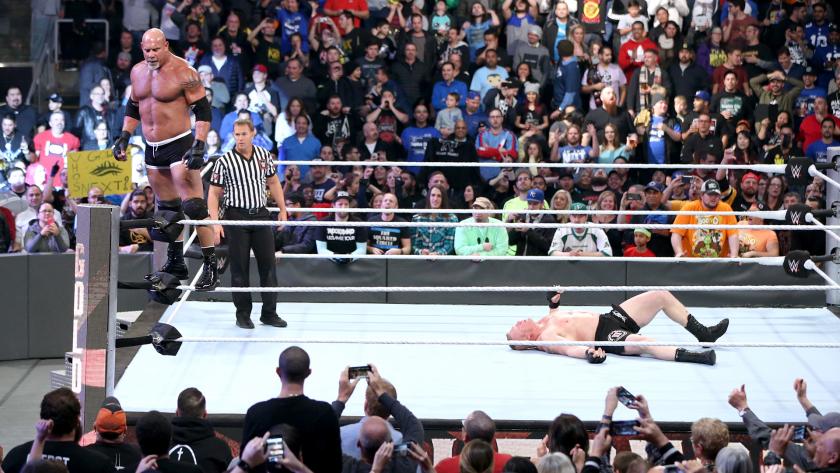 Before we get started, be sure to check out The FRO Horsemen Podcast (AKA The Blackest Wrestling Podcast on the Planet) featuring yours truly and my boy GQ-Blu (and sometimes Saule Wright). Also, if you want to watch wrestling along with us via Twitter during Raw, SmackDown, or WWE PPV’s use the hashtag #FROHorsemen.

Since Raw had already won the previous two Survivor Series matches of the night, I figured Smackdown Live would win this match. A few things I didn’t expect is for this match to be almost an hour long and for Bray Wyatt & Randy Orton to be the last ones standing. The storyline of Randy Orton being a Wyatt Family member should be a big deal so it makes sense. I just surprise The WWE saw it that way too.

That wasn’t the only thing that happened in this match. Actually, there was almost too much happening in this match to name but I’ll try list them:

James Ellsworth interfered and caused Braun Strowman to be counted out (Nice callback WWE). Of course Strowman went to kill Ellsworth by throwing him off the stage and into a table.

Kevin Owens got disqualified because he used the List of Jericho as a weapon.

Roman Reigns almost killed Shane McMahon with a spear. No seriously. Look at this GIF:

Even though I don’t really fuck with #AllLivesMatter Randy Orton, props to him for talking to Shane’s kid right after.

The Shield reunited and triple powerbombed AJ Styles through an announce table. Oh what the hell, here’s a GIF of that too:

Orton protected Bray and reversed a frog splash to a awesome RKO. Damn. Another one:

Orton (again) sacrificed himself and saved Bray Wyatt by jumping in front of a spear. Luke Harper was there too.

All of this chaos made this Match of the Night.

I’m still unsure if this even happen. The build up to Goldberg versus Brock Lesnar was crazy. But in the end the match wasn’t two minutes long (It was actually a minute and 26 seconds and the phone call after between me, Saule, & GQ was way longer). It consisted of two spears and a Jackhammer with Brock Lesnar barely got any offense. Here’s the ending (in VIDEO this time):

Like I said, I’m still scratching my head on this one. WWE really let Goldberg, somebody who hasn’t wrestler for 12 years, run over Brock FUCKING Lesnar, a former UFC Champion, the guy who suplexed John Cena a 100 times, and the guy who broke Undertaker’s streak. Is a rematch happening a WrestleMania 33? Is Goldberg wrestling Undertaker at WrestleMania in Orlando? Hell, is Goldberg ever gonna wrestle again? (Update: Goldberg has already reportedly been signed to appear at Royal Rumble). I don’t understand the decision but maybe it’ll be clearer on Raw tomorrow night. Probably not.

The pre-show wasn’t that good so I’m not gonna talk about it.

The Women’s Team Raw defeated The Women’s Team SmackDown Live with Charlotte & Bayley being the Survivors (Of course Charlotte jumped Bayley after the match). It was an okay match but I didn’t like that it had my baby’s mother Nia Jax tap out. Weak.

To my surprise The Miz retained the Intercontinental Championship against Sami Zayn. I’m also surprised that Dolph Ziggler didn’t interfere or didn’t appear all night (Survivor Series was a big moment for him not too long ago). I’m not surprised that Maryse helped The Miz win. #DownAssChick

And that’s it. What did y’all think of the show? I’ll be back here in December for TLC: Tables, Ladders & Chairs and even sooner via The FRO Horsemen podcast. PEACE!!!