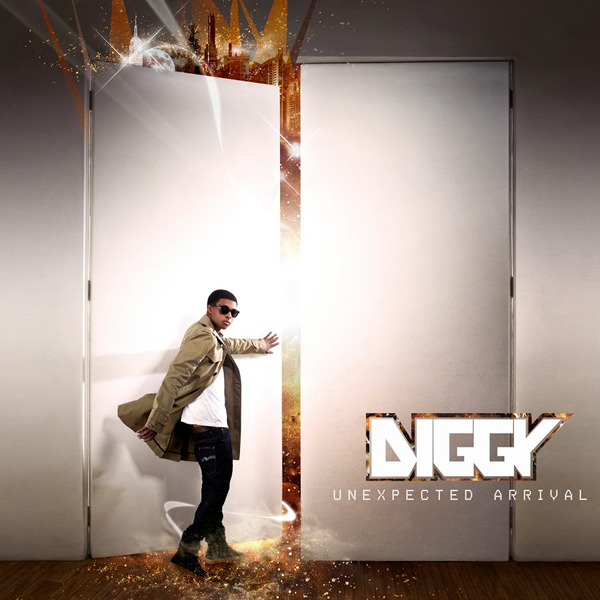 I never thought Diggy Simmons would be a rapper. I watched Run’s House but thought it did not fit his personality. He was very timid on the show. What is little Russy going to be now? I am taking bets on a drug lord. The album title makes perfect sense now. But does the album stunk or give spunk to your day? I will tell you what to think.

1. The Arrival (Intro)
Produced by Dernst “D’Mile” Emile II
The first voice on the album is not Diggy’s. It is some inspirational words from another African American male. It definitely is an unusual way to start an album. But I was fine with it. Different is good in today’s world. I could see many fatties stop eating McDonalds after listening to this.

2. Hello World
Produced by Happy Perez
Diggy introduces himself properly on the second track. The chorus might be annoying to some but simplicity is good. The message taken from the song is that…I do not know. I have listened to this song about four times and could not find it. The central message got lost in the shuffle. Diggy is here though and he is saying hello.

3. I Need to Know
Produced by Dernst “D’Mile” Emile II
This is where the communication between rapper and listener comes through fully. Will his friends stick around if he flops? What if he does not get the fame? This concept has been done by many artists. Most of them are not done by stars that are living in their parents’ footsteps though. Miley Cyrus never tackled this subject. “Need to Know” brings us into his current lifestyle. It is probably subliminal shots sent to JoJo who keeps applying to be his road manager.

4. 88
Featuring Jadakiss; Produced by Da Internz
Diggy needs to pat the producer on the back for this one. He touched my heart with the bass lines. Jadakiss is an unexpected guest appearance but compatible with the beat. Everyone loves the Jadakiss laugh. And yes, that is a “Dead Presidents II” sample. Diggy gets my stamp of approval for that one.

5. Two Up
Produced by Dernst “D’Mile” Emile II
The natural high calms down a little with “Two Up.” The song has a little piano and falsetto here and there to lighten the mood. We posted this for a good reason. It is a great song for the global warming season. Windows down while drinking Capri Suns. 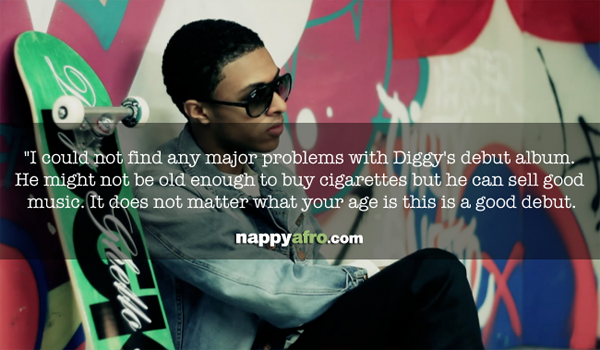 6. Unforgiveable Blackness
Produced by Osinachi Nwaneri
Diggy tries to get deep again like on “Need to Know” but we have heard enough of that. One track of deep thoughts is enough. We have had enough of the grand piano too. The verses fall short but the chorus makes it not too bad. I wanted to to totally not like this track but I can’t. It is acceptable.

8. Glow In The Dark
Produced by Dernst “D’Mile” Emile II
This one is for the mixed crowd. It can be appreciated by all. We all can’t appreciate that he gave out his Twitter on the second verse. It is there. I am not lying.

9. 4 Letter Word
Produced by S O U N D Z
I did not know Diggy wanted to be the triple threat with sing, dance and rap. He should not. You can skip over this one unless you’re a Mindless Behavior fan.

10. Do It Like You
Featuring Jeremih; Produced by Pop & Oak
There is a reason this is a radio hit. We all might have hated Jeremih’s “Birthday Sex”. We have found out this year though that we can tolerate him in moderation. He is a good feature singer.

11. Tom Edison
Produced by Dernst “D’Mile” Emile II
This is the punchline and hashtag rap you have been looking for. I enjoy the sample used and it has a nice kick. I do not like the concept though as a whole. It is not meant for me. I might be a little too old for his one.

12. The Reign
Produced by Pop & Oak
This is the way to end an album. Most albums have a drop off after half way through. But Diggy ended his album with a bang. Like he starts off his first verse ”this is a type of song that will make his stock rise”. He will probably be in Takers 2 if he keeps making songs like this one.

Bottom Line:
I could not find any major problems with Diggy’s debut album. He might not be old enough to buy cigarettes but he can sell good music. It does not matter what your age is this is a good debut. Let us just hope he can keep it up to keep the Simmons name strong.