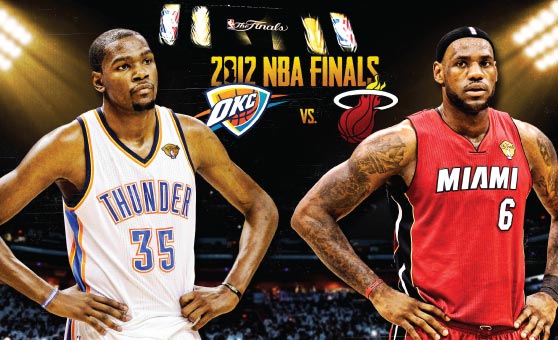 Guess who’s back? I know I been gone for awhile, but I haven’t forgot about the Fro at all. Before we go into my NBA finals preview, let me give you guys an explanation of where I have been. First thing that had somewhat tied my hands from writing pieces for you loyal Fro’ followers, was another gig writing for another website. I kind of made a mistake and went to another team that was trying to tie me up from writing for y’all, my bad it won’t happen again. They were trying to get me to write pieces that just weren’t honest to help affect the way people would wager on sports. I refused to do it, and had to fight to get out of my contract. My lawyer advised me not to write for anybody on the web until it was all cleared up, but now the separation has evolved to a divorce. Now I get to come back to my first love. Still I won’t be fully back until September, because of military obligations, but you will see a nigga when he gets time to visit until then. Now I have been following the sports world, and damn I have a lot to say. Still I will focus on the upcoming NBA finals that will showcase the Heat and the Thunder.

This NBA season was an odd one to say the least. First off it was only 66 games in less than 100 days. This may have been the reason for a slew of injuries that may very well have hurt the chances for some of the NBA’s upcoming teams, especially the NY York Knicks, which I expected to be a major player in the Eastern Conference with the addition of Tyson Chandler. Still the two teams I expected to be in the finals are there. Both OKC and MIA have had great years, or at least good enough.

While OKC impressed this year, and grew up in the Playoffs, Miami is limping into the Finals. LeBron and company just eliminated an old Boston Celtics team. When I say old, I mean ancient. Chances are that at least one of the Big Three of Boston’s core decides to hang it up during the offseason. They came into the series against Miami struggling and injured. Still their resilience was obvious. After starting the series off 0-2 they came back and were able to force a seventh game that was competitive until half way through the 4th quarter. The Thunder on the other hand ran into an old team as well, but they were playing at a high level and were up 2-0 against the Thunder until Durant and Westbrook were able to right the ship and win the next 4 games.

Looking at the teams from the surface, it would seem that the Heat are the favorite. Miami has 3 future hall of famers in LeBron, Wade, and Bosh. That makes their team deep in somewhat of an unconventional way. Meaning that they may not have the deepest bench, but with the right rotation, the Heat can keep a potential thirty point scoring threat on the court at all times. They are the only team in the NBA that has that ability. The issue is that they are missing a few elements that most championship teams have had in the past. They don’t have a real floor general. I like Mario Chalmers a lot. I actually think he has the capability to turn into a Chauncey Billups type player, but he isn’t there yet. Second they don’t have a goal protector. If Dikembe would throw on a Heat Jersey, come out and give people the finger and be that guy it would be hard to see the Heat losing. What they do have is a lot of good multi dimensional players between 6-4 and 6-10 who all play the same way. That also is a huge reason that they seem to be stagnant at times. Most of their offense is give it to someone and get out of the way. I haven’t seen a team win a championship like that. Have you (directed to Saule Wright, not you P-Body)?

OKC has a surprisingly good team, filled with a lot of players you may not know about. Let’s start with the big three; really it’s more of a big four. Durant is a scoring machine so most know who he is. Westbrook is a mirror image of Derrick Rose. He is quick and unbelievably athletic. Serge Ibaka (Iblocka if ya nasty) is the reincarnation of Mutombo. He led the league in blocks, and his offensive game is coming along nicely (look at the game against SA Spurs where he shot 11-11). James Harden is the sixth man of the year, and the Heart and Soul of this team. If he were to go to almost any other team he would be their starting two guard, and probably share point guard responsibilities as well. The thing about their big 4 is that they can all play effectively together. I don’t think that the Heat have that capability.  The weakness of the Thunder, however is Westbrook. He will have to calm down, and not look at Mario Chalmers as a guy who can’t guard him. Although it is somewhat of a mismatch, the thunder are at their best when Durant is the obvious number one option.

What the finals will ultimately come down to though is how much the Heat want it. OKC wants this bad, but I’m not sure they have their backs to the wall like Miami does. I guarantee that if the Heat lose this Finals, the Heatles will be no more. Pat Riley didn’t assemble this super team to compete every year, and the Wade, LeBron, and Bosh know this. If they lose expect at least one of those big three are in a different uniform by next year. Who wins? Miami’s star power of the Thunder’s cohesiveness?

My Pick: I want the Heat to lose, but I think they Thunder aren’t quite ready for this stage, though I hope I am wrong. If Miami plays the way they play against the Pacers and the Celtics, the Thunder will be the Champs though.