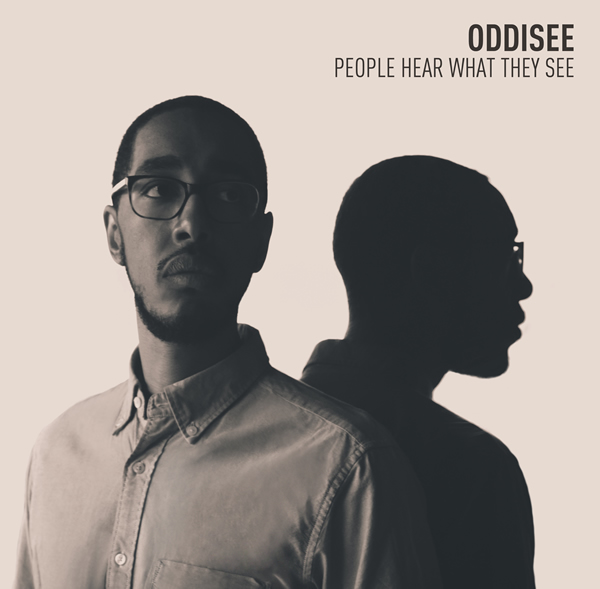 Before we start this review let’s make one thing clear, up until a few months ago Oddisee’s music wasn’t on my radar. I’d heard of him before in the past for producing beats for Little Brother or being part of Diamond District & Low Budget Crew, but I just was generally unaware of his work (Sidenote: Eddy wrote a good article about the Low Budget Crew not too long ago). It wasn’t until he dropped the video for the remix of Marvin Gaye’s “Ain’t That Peculiar” that I started to take notice. Not too long after, Oddisee dropped the free EP Odd Renditions and it was there that I became a fan. Let me say this, Odd Renditions is only 4 tracks long, but if you wanna throw it in the mixtape category, it can arguably be looked at as one of the best free project (so far) of 2012. Now Oddisee releases his newest album People Hear What They See and so far all I’ve heard about the album is good things. Let’s see just how really good this album is…

1. Ready To Rock
Produced by Oddisee
I always thought it was appropriate to use horns on an album intro/first song; it’s like an announcement is being made or something. Oddisee brings the horns but also a lot more on the approproately titled “Ready To Rock” showing just how much he puts into his production (Synths, keyboard, & violins all show up here). On the lyrical side Oddisee hold it down and even show range on the second verse by changing it up and going with the rapid flow. Great start.

2. Do It All
Featuring Diamond District; Produced by Oddisee
Oddisee hooks back up with his crew Diamond District here. The thing about “Do It All” is that while it isn’t bad, compared to most of the other songs on People Hear What They See, it seems boring. The production is good and shows some detail but the hook and some of the verses bring it down. This is one you may wanna judge for yourself.

3. That Real
Featuring Oliver Daysoul; Produced by Oddisee
Here Oddisee raps about what’s real to him and the preception of real in Hip-Hop:

They’re saying “oh, bring that real shit, something you can feel shit”
Numb to that dumb it down spun overkill shit
Run over hills shit, dated like the fifth wheel
Hate it when they made it but they praise it just to get deals
Me, never that, Man: that’s never happening
See, I be rapping for that feeling I got back when
I was riding on a big wheel
When friends owing me a dollar was a big deal

As for the production, it sounds like he looped an old soul record (I couldn’t figure out which one) and the results give you that feeling of that 60’s era. Also it was a good job getting Oliver Daysoul on the chorus to mimick that style. It all works pretty well.

Sidenote: There’s a video of Oddisee perfroming this song in Peter Rosenberg’s living room and it’s from over 3 years ago. You can even hear him explaining how he gonna put the song toether. Pretty interesting.

4. Let It Go
Featuring Oliver Daysoul; Produced by Oddisee
This was probably the first song I heard off this album (In this video) and the beginning immediately reminded me of “Theme From Shaft” but more inspirational (if that makes sense). Either way, you can tell a lot went into the production and I read that Oddisee even went to the Berklee College Of Music and got brass and strings done on the whole album. All this backs Oddisee’s lyrics about trying to acheive golas and letting go of whatever is in your path (“I a man of faith but I’m not a man that waits”). This could be the best song off the album.

5. American Greed
Produced by Oddisee
The way this song starts out shows the layerd production; it goes from to just synths, then piano is added, then a boom bap break beat, then more bass and hi hat, then horns. Oddisee talks lot about the greed of the American system (“Gallon a gas/2% percent are the same price so it seems ti viallan goes the spoil) to just greed in general. Another stand out track.

6. The Need Superficial
Featuring Oliver Daysoul; Produced by Oddisee
Production wise, if I were to compare the sound of this song, I’d go with Kanye West’s “Touch The Sky” or something like that. But I don’t think that’s by design; the song has its own thing going on. The song is kinda short and the Oddisee’s lyrics could be taken a few ways (Is he talking about a girl? Material things? Money?), but in all the song is a success.

Sidenote: Not only is “The Need Superficial” the lastes single but it was also used by Google when they revealed their Nexus Q streaming media player. 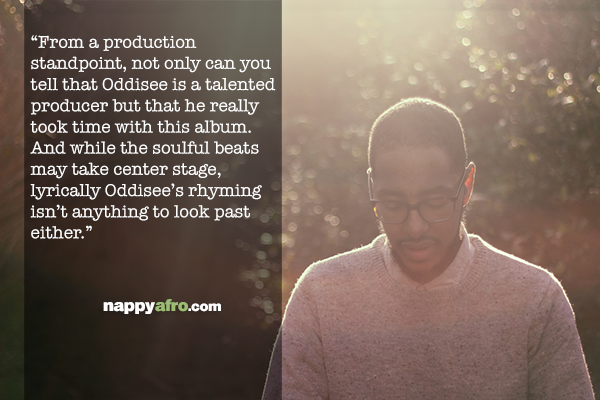 7. Way In Way Out
Produced by Oddisee
The title of the song perfect in describing it’s subject: Looking for a way in to success and a way out of poverty. And the topic is discussed futher over sinister horns. Songs like these are needed not only to tackle a serious subject matter but they also flesh out an album by giving it some depth:

See we crabs in a barrel and the barrel was glass
So we broke, crack was the answer to cash
But the question was never asked: how we get off the path?

8. Maybes
Featuring Ralph Real; Produced by Oddisee
This one is directly for the women folk. It deals with going back to a relationship that you may have ended too early (“Maybe we can fix it, maybe we need romance…”). This songs also has me questioning why Oddisee hasn’t done more production work with R&B singers; this one has a Maxwell/Jill Scott vibe to it. Play this one with your lady.

9. Anothers Grind
Featuring Tranquill; Produced by Oddisee
The subject here is about focusing on your grind instead of the next man’s. The production is another one that’s well done with soul sample loop but what really stick out here to me in the verse from Tranquill (or Tranqull, I’ve seen in spelled a few way). He sounds like he’s from across the pond but his verse is basically a poor man’s Biggie Smalls (Not in a good way). Just saying.

10. Set You Free
Produced by Oddisee
Oddisee brings up the tempo with this one. While questioning the nature of people and the world in general, Oddisee basically raps for over 2 minutes straight with a live bands backing him up. It shows his lyrical ability plus great instrumentation used (I’m loving the drums here).

11. You Know Who You Are
Produced by Oddisee
Without naming names, Oddisee gives certain people in his past a verse dedicated to them. The first one is for a person that told him to stop following his music dreams. The second is for a person who told him to follow his dreams. And the third, to me at least, feels like he’s talking to his self about staying the course. But then again, I read an article that Oddisee said that the song is a mixtaure of people. If that’s the case, the song has a Jay-Z “You Must Love Me” vibe because the way it’s laid out, it feel like it’s a particular person but it’s really not. The production is once again on point here really showing what you can do with live instruments (Listen to that piano) and there’s even an official acoustic version that’s pretty good too.

12. Think Of Things
Produced by Oddisee
If the credits are rolling on People Hear What They See, this is the appropriate music to play. Oddisee talks about being in a good place and even gives shouts out his home town. The laid back beat is anchored by a sample from Audio Two’s “Top Billin’“; “What more can I say” may be more than just a sample. The album comes to an end.

Bottom Line:
As you can probably tell already, I really enjoyed this album. From a production standpoint, not only can you tell that Oddisee is a talented producer but that he really took time with this album (He actually work on it on and off for 4 years). And while the soulful beats may take center stage, lyrically Oddisee’s rhyming isn’t anything to look past either. There are brief moments where his points are not as clear as they should, but for the most part he holds his own on the mic. Even though People Hear What They See is getting critical acclaim, I’m pretty sure it won’t get the recognition it’s deserves. Hopefully Hip-Hop will open their eyes to what Oddisee has in store.