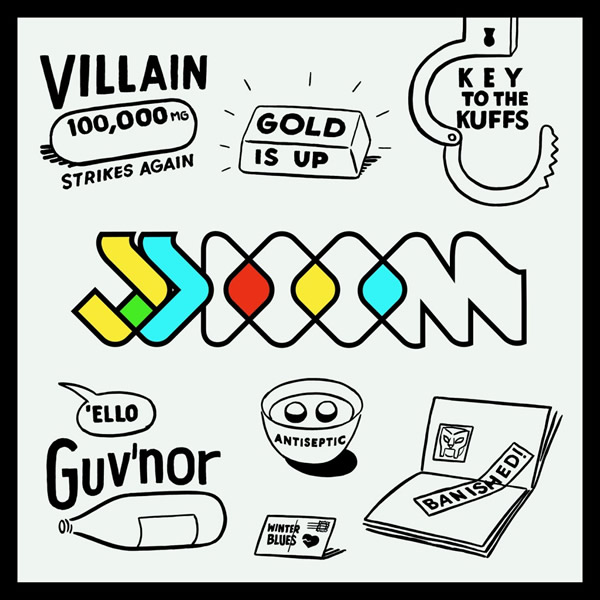 MF DOOM (he prefers if you spell out his name in All Caps) is easily one of the best lyricists to ever pick up a mic, and whether you realize it or not, he’s also hugely influential both as a rapper and as a producer.

Despite all of his accomplishments and talents, he’s also largely unknown to anyone who’s not a huge underground Hip-Hop head. This lack of mainstream popularity is probably directly related to how weird he is. The beats he makes are often incredibly strange, he’s not made a public appearance without his mask on since the 1990’s, his records heavily sample cartoons and monster movies, and it’s almost impossible to keep track of all of his aliases. But when you get past all of that and just listen to what the dude is rapping about, you’ll hear some jaw-dropping lyrics. So on DOOM’s latest album Keys to the Kuffs (which was entirely produced by Jneiro Jarel and released under the name JJ DOOM) let’s see if the 41-year-old MC can still provide top shelf lyrics.

1. Waterlogged
Produced by Jneiro Jarel
A typical MF DOOM-style skit starts off the album. I have no idea where any of these dialog samples come from, but you can hear someone yelling about “money and power”.

2. Gov’nor
Produced by Jneiro Jarel
Jneiro comes through with a great laid-back beat that never gets in the way of DOOM’s lyrics. After all, you wouldn’t want to miss DOOM name-checking an Icelandic volcano or warning about the dangers of fake weed. He even finds time to give an Econ. 101 lesson, “Gold is up, urging all thugs, trade in your chains for cash and splurge it on drugs.” Based on this track, DOOM hasn’t lost a step.

3. Banished
Produced by Jneiro Jarel
This song just totally killed the nice vibe that “Gov’nor” set up. The beat here can barely even be classified as hip-hop. DOOM is usually on some next-level material so maybe in 20 years this is what rap music will sound like, but for now, this track just went over my head. Stream-of-consciousness rapping is something that has become surprisingly mainstream in the last ten years. Lil’ Wayne, Cam’Ron, Gucci Mane and others have made careers out of just saying whatever pops into their head that rhymes and sounds cool. But for that style of rapping to succeed, you need a nice flow, some punch-lines, or at least a theme. The lyrics here are just all over the place.

4. Bite The Thong
Featuring Damon Albarn; Produced by Jneiro Jarel
Jneiro comes through with a much better beat on this track, which also features Damon Albarn (of the bands Blur and Gorillaz) who delivers a robotic sounding chant on the chorus. DOOM refuses to be satisfied with a bar that only rhymes in one place: “He been flippin’ beats since Casio Bossa Nova, We need a chauffeur for the rover where they go ‘fer.” This is shaping up to be a weird album, but Hip-Hop has a long history of being a weird art form.

5. Rhymin Slang
Produced by Jneiro Jarel
On DOOM’s classic material like, Operation: Doomsday, Mm.. Food or Madvillainy, the beats may have used strange samples, but they were still reminiscent of classic Hip-Hop beats. Those older beats were laid-back and gave DOOM plenty of space to flow. But on this track and on some of the others on the album, DOOM doesn’t sound comfortable. His lyrics are still great here, but tracks like this one can’t measure up to his classic joints. Some rappers are at their best when they can yell over chaotic beats, but really complex lyrics like these need room to breathe.

6. Dawg Friendly
Produced by Jneiro Jarel
On this track, Jneiro takes over on the mic and kills it. It also sounds like he was saving his best beats for himself. During the track, he shouts out the Camp Lo track “Luchini”, and this beat wouldn’t have sounded out of place on that classic Ski-produced record. His double-time flow makes the song sound even more similar. I would have loved to hear DOOM over this beat though.

7. Borin Convo
Produced by Jneiro Jarel
After getting somewhat shown up, DOOM is back on his A-game, and starts issuing threats to radio stations over a lurching beat. The song is only two minutes long and is broken up by some odd voice samples, but the beat is great and the lyrics remind of old-school Wu-Tang:

8. Snatch That Dough
Produced by Jneiro Jarel
This skit features some unidentified voice discussing how violence should be avoided over a spaced-out beat. 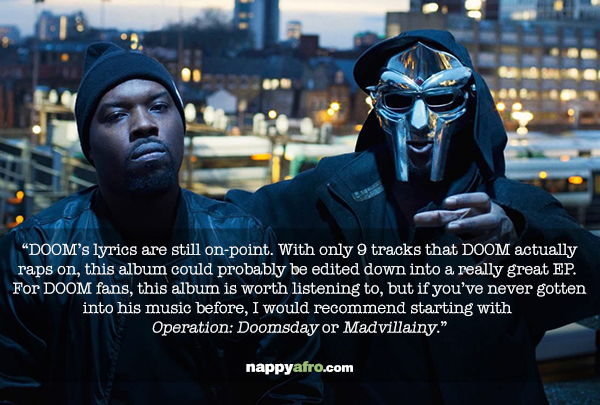 9. GMO
Featuring Beth Gibbons; Produced by Jneiro Jarel
This entire song is more paranoid than those people who are afraid of the Illuminati. The entire track talks about different kinds of food and chemicals and how they are slowing killing us. Some of the things DOOM tells us not to eat in this song: canola oil, diet cola, tap water, milk (because there is secretly blood in it), baby food, and rice (which is secretly infused with diarrhea drugs if you didn’t know). Despite DOOM sounding like a crazy uncle, this track is actually pretty great.

10. Bout The Shoes
Featuring Boston Fielder; Produced by Jneiro Jarel
This song features some dude named Boston Fielder singing. He sounds kind of like Cee-Lo Green, and the beat doesn’t sound like something that DOOM would sound that good rapping over, so I guess it was a good choice to bring in a guest singer. I feel like I would usually skip this track though, I want to hear MF DOOM’s rapping on an MF DOOM project, not singing.

11. Winter Blues
Produced by Jneiro Jarel
This is easily one of the best beats on the record with all kinds of strings and spacy sound effects floating around in the background along with a piano melody. But the nice vibe set by the beat is undone when you hear the subject matter. DOOM’s trying to get his Al Green on here, and I think he should stick to rapping about lasers, wack rappers, superheroes, and food like he usually does. I personally could have gone without hearing about his “lambswool beard”, or how he wants to “Eat ‘er up like a SnackWell”.

12. Still Kaps
Featuring Khujo; Produced by Jneiro Jarel
If you don’t know who Khujo is, you should get a hold of Soul Food by Goodie Mob, ASAP. That record is one of the most underrated albums in Hip-Hop history and features great production by Organized Noize. This track’s production reminds me of some of Organized Noize’s weirder beats, and that style of production fits Khujo well. But just like on “Dawg Friendly,” DOOM doesn’t even appear on this track, so we miss out on the opportunity to hear DOOM go bar for bar with one of the godfathers of Southern Hip-Hop.

13. Retarded Fren
Produced by Jneiro Jarel
Jneiro is back on one of his chaotic electronic beats, but this time DOOM’s dense lyrics finally mesh well with this style of production. An earlier version of this song was released a while back with the same lyrics, but an entirely different beat. That older track was produced by members of the band Radiohead, and this updated beat is a huge improvement. And DOOM is back to threatening people and acting like his typical super-villain self.

Villain til’ the Earth crust bust
Self-defense, think he’s not real
Up until you blink twice and feel the hot steel

14. Viberian Sun Part II
Produced by Jneiro Jarel
Based on the name, this instrumental track is a follow-up to a song on one of Jneiro’s solo albums. It’s kind of strange and repetitive and maybe if I had had a whole album of this stuff, I could get used to it and vibe out. But on this album, it’s too long (over three minutes) and makes me want to skip to the next track. Overall, this album has been way too inconsistent.

15. Wash Your Hands
Produced by Jneiro Jarel
This beat is all over the place, but like on “Retarded Fren” (which is just a terrible song title by the way) DOOM finally sounds like he’s getting used Jneiro’s stranger beats. Lyrically, DOOM goes all germaphobe on us, “Villain brings his own mug to the bar, and wore gloves till he go back to the car.” Overall, the track is hilarious and DOOM reminds that when he wants to be, he’s one of the funniest rappers working.

Bottom Line:
There are some solid tracks, like “Gov’nor,” “Borin Convo,” and “GMO,” but overall the album suffers from being inconsistent. Jneiro’s beats are all over the place. Some of them sound like classic MF DOOM material, and some of them are way more electronic. It’s good to hear that for the most part though, DOOM’s lyrics are still on-point. With only 9 tracks that DOOM actually raps on, this album could probably be edited down into a really great EP. For DOOM fans, this album is worth listening to, but if you’ve never gotten into his music before, I would recommend starting with Operation: Doomsday or Madvillainy.