Demise Of The Mic?: Examining The Current State of Rap Relevancy 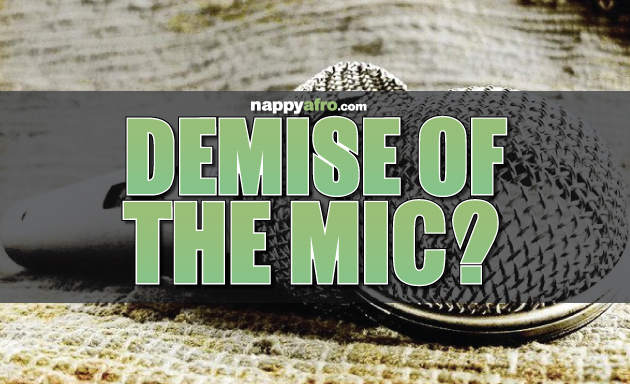 It must’ve been hard for people in the late 70’s to believe that Deborah Harry rhyming on her song “The Rapture” would amount to much besides a catchy tune. Of course we now know that Harry was doing what she heard in the NYC Black party scene, where deejays like DJ Kool Herc and DJ Red Alert where spinning records and Masters of Ceremonies were moving the crowd. Now Rap or Hip-Hop music is one of the farthest reaching, dominant, highest selling
musical genres in the world today.

While Hip-Hop remains a billion dollar conglomerate, it’s not hard to the see the luster starting to fade from the mic. To be clear the writing has been on the wall for quite sometime, but I think it would be good to go into a few of the growing problems that seem to continuously bring down the music and the culture.

The most glaring evidence of this is sales. This definitely isn’t the golden era of rap when artist’s weed carriers and flunky’s could go in the booth, spit some garbage and salvage a Gold plaque. However, nowadays even the top artists aren’t doing Memphis Bleek numbers (all of whose albums went Gold). Let that marinate for a second. Even Nicki Minaj, arguably one of the hottest rappers in the game, has seen a huge sales decline in record sales, compared to her first album. File sharing and a weak economy have all but guaranteed that we’ll never return to the glory days of sales. Of course sells don’t make an artist dope, but dope artists who don’t sell don’t usually get to or want to hang around just for the props.

Speaking of Nicki, it’s obvious whether you like it or not, she remains the lone female mainstream voice in Rap right now. It seems that the market can no longer support more than one female lyricist at a time any longer. Rap has always been male dominated, but in years past you at least had a handful of relevant femcees. Missy, Kim, Eve, Latifah, Trina, Shawna, Lauryn, etc. All of these women were at or entering their peak at almost the same time. Now all you have is Nicki, Nicki, and more Nicki. While there are new artist on the horizon, it doesn’t seem like they break into the majors any time soon.

Just as diversity in gender is an issue, lack of diversity in general is crippling the current Rap Scene. Before you had all kinds of different sounds, subject matters and styles. Backpackers had the Native Tongues, the South had No Limit. While Talib never sold like Jay, and the New York sound was heavy, you still had a plethora of sounds to choose from. Now? Everyone tries to sound like the South. And New York? It seems like they never did recover from Snoop knocking down those buildings, as artist struggle to bring back the prestige of the Big Apple. It is also troubling to see the birthplace of Hip Hop so desolate and on life support.

What may be most disturbing of all is the fact that Rap just doesn’t seem to matter anymore, at least not outside of the entertainment aspect. Rap used to be called the voice of a generation. Before CM Punk was the voice of the voiceless, Ice Cube let us know how hard it was to be brown. One of the best attributes of Rap is its power to agitate, whether it be to talk about the pitfalls of the concrete jungles of our inner cities, or to expose political anarchy. Not everyone has to be Chuck D or Lupe, but at least it seemed that not so long ago rappers had a message, or at least a point. Instead of songs we get loosely configured 16’s where cats just try to say the most random, over the top quotable. Maybe even most telling is that Rap doesn’t even scare or anger people anymore. 50 Cent does commercials with Joan Rivers now, and Snoop is a household name in suburbia. And, outside of the most out of touch Republicans and Fox News, no one’s calling for rappers to be boycotted (Well, maybe Bill Cosby is). Certainly it is a good thing that Rap has made huge gains at being taken as a legitimate art form, but with that Rap music has lost some its edge, which used to be one of its greatest assets. Look at the emergence of Gangsta Rap in the early 90’s. Groups like NWA were reviled yet applauded for their vulgar yet undeniably dope portrayals of Compton. Could you imagine those guys now trying to get a single in the iTunes 100? They’d probably be in skinny jeans with Trey Songz on the hook.

This is in no way trying to say that Rap is dead or that dudes need to rhyme a certain way to make Rap great again. They just need to care. Rap use to feel so big and important and grand, not to be cliché, but it really did feel like a movement that you were a part of. Now it’s just noise. Highly enjoyable noise, mind you, but still just noise most of the time. Videos killed the radio, and your homeboy who just bought a Mac Book Pro 2 is slowly killing Rap.